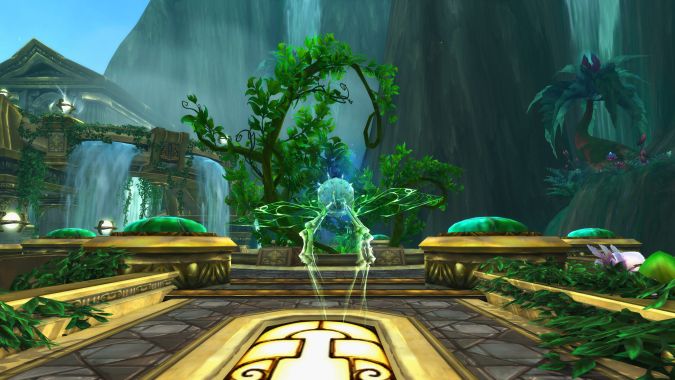 Eonar’s room in Antorus is downright gorgeous. Naturally, I had to Mitch it up a little bit with a giant, flying spider. Azeroth is in good hands… err, legs. Eight of ’em!

STYLISTSHUANNA HAS A QUESTION FOR SCIENCE:

QftQ: One of my oldest blood elves are a level 70 warlock on a server outside the server cluster where I currently reside. With 7.3.5 leaning towards enabling us to roll Allied Races – void elves etc – do we know if it will be possible to race change from blood elf to void elf?

I’m toying with the idea of bringing the old warlock over, because I’m curious what hides in the 75 lockboxes she’s got in her bank – all of them predate Cataclysm, so … yeah. It’s for science! If I can’t race change from blood to void, well, then the experiment will fail. For some reason she also got 10K gold, and since she hasn’t seen any action since pre Cata, that gold rightfully belongs to the Alliance!

As far as I’m aware, you’ll be able to transfer to an Allied Race as long as you pay for the requisite race/faction transfer. However, the Heritage armor requires leveling from scratch. If you want the fancy, race-specific armor, you gotta level the old fashioned way.

Also, one final note: 7.3.5 has a lot of Battle for Azeroth data to be mined. This doesn’t necessarily indicate we’ll see Allied Races with 7.3.5 (though, I wouldn’t be surprised if we did, either).

So Sylvanas should be completely destroyed now and previously it was the Horde should burn for what happens at Darnassus (from the podcast). I feel like Rossi has extra information I have not seen, I thought no one knew about the circumstances that leads what happens to Darnassus?

I spent some time searching but I cant find anything I feel explains what happens at Darnassus, can someone point me in the right direction to catch up?

We don’t know what leads to Darnassus burning, no. We know that Sylvanas is responsible, for one reason or another, but we don’t know what made her do it, and we don’t know if she burned Darnassus before the Alliance attack Undercity or not. For now, this is all intentional on Blizzard’s end. We’re not supposed to know about those things until they actually happen.

Side note: Sylvanas can do whatever the eff she wants. Dark Lady watch over you.

EDIT: Several pointed out that we don’t actually know Sylvanas did it. That’s a mistake on my end — it’s not clarified, but it’s been said that “the Horde” burned Teldrassil. It’s up in the air who, specifically, that means.

Was there a max on Concordance of the Legionfall, or just not worth it past the final Crucible rank which is 75, I think?

There’s no max, but 75 is generally considered the goal for the exact reason you mentioned. The stat boost itself is just sort of okay, but the Netherlight Crucible’s bonus effect is the real hotness.

Would any of the staff of BW be interested in trying out the zone scaling on the PTR and reporting back with their impressions?

Here’s the thing — the interest is almost always there for at least one person on staff. The issue is having the time to do it, and if that time is worth the payoff. That sort of testing would either have to be surface deep in order to get a small impression and write something quickly, or in-depth and time-consuming. If the former, will readers appreciate the brevity? If the latter, will the time spent correlate to actual readership?

This sort of thing happens a lot, especially in this business. People loved the leveling streams, but that was 2 hours a week for five of the staff that, frankly, generated no revenue at all. I really — genuinely — hate when business gets in the way of content, but sometimes, that’s just how it is. That’s not to say business is always the deciding factor — class columns are totally not a smart decision business-wise — but you have to take wins where you can. 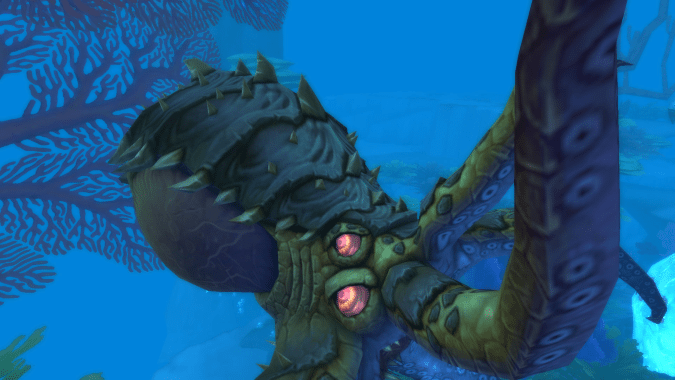 Q4tMitch: Esteemed Mitch, merciless eater of sanity; is there such a thing as too many tentacles when playing shadow priest? Of course not, and no that isn’t the real question. Rather what is the best way to maximize tentacle output as a shadow priest? Why can we not transform our heads into a undulating mass of tentacles that extract the brains of our feeble enemies for consumption?

You had me worried there for a second, Spence — obviously there’s no such thing as too many tentacles. If you want maximum tentacle-ing, I recommend the following…

That should get you started. There are probably more ways, so feel free to list your World of Warcraft tentacle strategies in the comments!

KALCHEUS DISCOVERS THE ILLUMINATI (OR SOMETHING):

Q4TQ: Do you think that when the Night Elfs build a new home, they’ll choose a tree like Longleaf Pine, Sequoia, or some other pyrophytic species?

Maybe they’ll opt for an underwater species to shake things up. Then, over time, they’ll evolve sea legs — or, as some call them, tails. One day, they’ll become just like the Naga, revealing the true origins of those fire-haters.

KALCHEUS… WAIT, I PUT TWO OF HIS QUESTIONS IN A ROW?

Q4TQ: 7.3.5 contains some Allied Race stuff, and the quests/story that happens in … the place where something happens in the Antorus end cinematic. Ignoring the Allied Race stuff for now, do you think we’ll see a 7.4 with more story/lore, or do you feel 7.3.5 is the last of it before the pre-BFA patch and events?

I didn’t see this week’s podcast on the front page of Blizzard Watch, nor are the podcasts a category down at the bottom of the page. I’m also thinking I didn’t see it last week, either. Was it posted (after the article saying there would the live recording)?

So, this is a new thing we’re doing — the podcast indicator is on the main page now, and should indicate when we’re live. We have to manually tweet its start now, but that should be consistent once we’re in the flow of things. There is an option on the drop-down menu for podcasts now as well.

As is always the case, if there’s specific feedback about this stuff, it’s best to email us.

MILD SPOILERS IN THE NEXT AND FINAL QUESTION, JUST FYI

AZVOLRIEN CAN’T SEE THE SWORD FOR THE TREES:

So, quick question: I’m guessing you can’t yet see the sword in Silithus if you haven’t cleared Antorus, correct? I flew over there earlier to see how far I could get by hang-gliding off the pommel, but it was just the same bug desert as ever.

Correct, the sword is much like Argus appearing in the sky. It’s not there for you until you clear Antorus. Presumably, it’ll show once all of Antorus has been made available in LFR, but only time will tell there. Keep in mind as well, it’s going to change further in 7.3.5 — but your PTR toon has to have cleared Antorus to see the new version anyhow, so… /shrug

I always forget how much more you guys chat over the weekend — not that that’s a bad thing! It just means there are a lot more comments to go through, and more comments means more questions.

As such, you may see some of them in tomorrow’s Queue. Which will also be written by me, Mitch. Yay for Mitch!