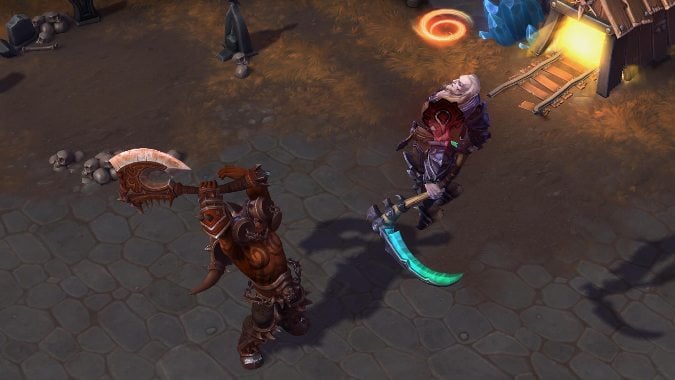 Heroes of the Storm has been struggling with its matchmaking since its patch last week. Today, the servers went down for unusual Wednesday maintenance to address some of these issues — but the game’s latest balance patch rolled out at the same time. In addition to some matchmaking fixes, heroes such as Nova and Li Li received some tuning tweaks, while Garrosh received a fundamental change to his defining ability, Groundbreaker.

Previously, Groundbreaker pulled heroes hit by the ability toward Garrosh. Through Groundbreaker, he could yank enemies into melee range, then throw them to his desired location with Wrecking Ball. This combination brutally punished enemy heroes who were out of position, almost guaranteeing a gank. Garrosh’s mere presence in a fight put his opponents on the back foot, creating an area of control no other hero can claim. Perhaps rightly, players viewed this situation as having no counterplay — the only way to avoid Garrosh getting picks was, often, simply not fighting him at all.

As of today’s patch, Garrosh’s Groundbreaker no longer pulls enemies toward him at all. Instead, Groundbreaker applies a brief stun followed by a 2-second slow. Garrosh can no longer pluck an enemy out of the fray and toss them away — instead, he’ll need to follow up on Groundbreaker by pushing forward to close into melee range with his enemies before he can use Wrecking Ball. Luckily, this balance patch also gives Garrosh a minor buff to his health, hopefully making up the difference of needing to put himself at greater risk to get anything done.

Of course, having a baseline AOE stun could empower Garrosh in a completely new way.

Developer Comment: While he is well balanced with regard to his win-rate, Garrosh has been widely considered more punishing than other Warriors compared to the amount of counter-play he offers. While we love his playstyle and the epic moments he can create, we wanted to reduce the amount of frustration he can cause opponents. We’ve added a window of time between being hit by Groundbreaker and being thrown into the enemy team, which should help players have more opportunity to outplay him. We’re also looking at other Heroes who are lacking in counter-play, or are overly frustrating to play against, and are planning to make similar changes to them in the future.

The smaller balance changes in this patch are solid all around — Li Li needed some help after her recent rework and the Stealth changes in the 2018 Gameplay Update may have given heroes like Nova too much power. And, as someone who loves playing Artanis, I’m always appreciative of Artanis buffs.

Blizzard Watch is made possible by people like you.
Please consider supporting our Patreon!
Filed Under: Balance Patch, Garrosh, Groundbreaker, Patch Notes
Advertisement