The Queue: This is definitely not about anyone in particular 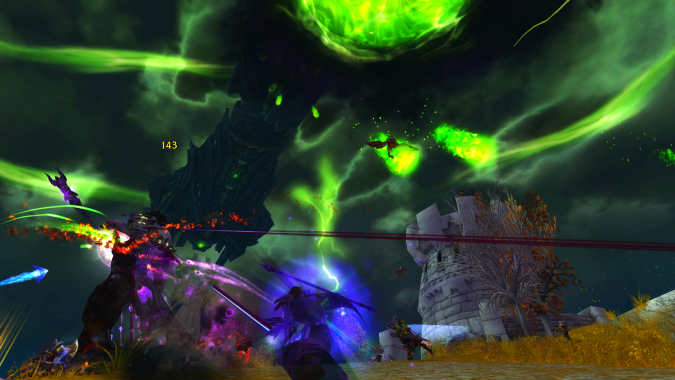 Nope. Not at all. Mitch’s concerns are entirely misplaced here and I really have no idea why he thinks that. None.

You are on an island of truth tellers and liars. One of them says that holy priests are awesome. The other says that shadow priests rule, and cloth heirlooms are fine for leveling a hunter. Who is telling the truth, and who is lying?

I am suspicious that one of these people may in fact be my arch-nemesis Mitch. Sure, lots of people like Shadow Priests, but Mitch is the only one I can recall also defending the use of cloth heirlooms for leveling everything. And, okay, maybe that’s the practical answer to leveling new characters, but, come on, a Hunter not wearing mail just looks silly. (Like those poor old-school Paladins wearing Devout.)

So let’s go with the sparkles. Holy Priests all the way. (Discipline also works. Glitter all the way.)

If they removed Shadow Priests from the game how much better would it be, kinda better to the best ever?

Huh, there are a strange number of Shadow Priest questions in today’s Queue. I’m really not sure how that happened. (Okay, in actuality a lack of questions around the holiday is probably to blame.)

I have played a couple of Shadow Priests in my day, but I have to admit that their Legion storyline is a bit worrying. It’s that whole thing where they spend their days chatting with a sentient knife. What is the knife going to tell them to do next, and can we really trust someone who’s BFFs with a knife? I’m unconvinced. We might be safer without them.

What kind of achievements would you like to see which aren’t, currently, in the game?

One achievement that I really enjoyed was Field Photographer. It was like a scavenger hunt through the game and it was a heck of a lot of fun to get. (Especially playing with getting fun shots to share. I still use a lot of my silly Field Photographer shots as header images.)

Though there are some similar achievements — there are tons of collection quests and then there’s To All the Squirrels I’ve Loved Before and its follow-ups — I’d really like  to see more along the lines of Field Photographer. It wasn’t a gotta catch ’em all achievement and it wasn’t a kill X of Y achievement. It just rewarded you for running around and doing something kind of neat, and it was a blast to do.

Q4tQ: Considering ingame gold now has a real money price, should all real money items be purchasable with gold, according to how much the token is worth?

While it’s not as straightforward as clicking “buy,” you basically can do this by selling gold in-game and buying a pet with your Battle.net balance. This may just be simpler precisely because the gold market constantly fluctuates, so either the price of pets constantly fluctuates or you’re paying a varying amount of gold depending on when you buy.

The only answer here is a disappointingly vague “kind of.” But because you’re exchanging real money for things of random value, we are seeing government regulation that specifically targets digital loot boxes. In China, companies selling loot boxes have to specify the odds of getting items. It doesn’t prevent the selling of loot boxes, but it at least informs consumers of what they’re likely to get (and whether it’s worth the cash). Apple has just started to do the same with games in its App Store, which would affect Hearthstone.

Loot boxes are still the wild west where government oversight is concerned, and the situation is continuing to develop… but I suspect we’ll see more of this moving forward, especially as random loot boxes for cash become central to more and more games.

Q4tQ: Blizzard exists in the Overwatch world, so what’s the deal with the lack of cos-play skins during halloween? Marshal Raynor McCree? Moira as Moira (get meta with it)? Patchwerk Roadhog? Dark Lady Junkrat? Firelord Mei? Barbarian Zenyatta? Is it too self-congratulatory?

Some of them are already coming with the Blizzard World map, like a Nova skin for Widowmaker. (Which is hilariously meta, since Nova in Heroes of the Storm has a Widowmaker skin). But, absolutely, give us more. Considering some of the skins we already have (i.e. Junkrat’s winter skin) and the general goofiness of Blizzard World itself, more “cosplay” skins would fit right in.

Now I wish you happy trails, Quevians. I’ll be back next week, and in the meantime please leave your comments below for Anne to answer tomorrow.