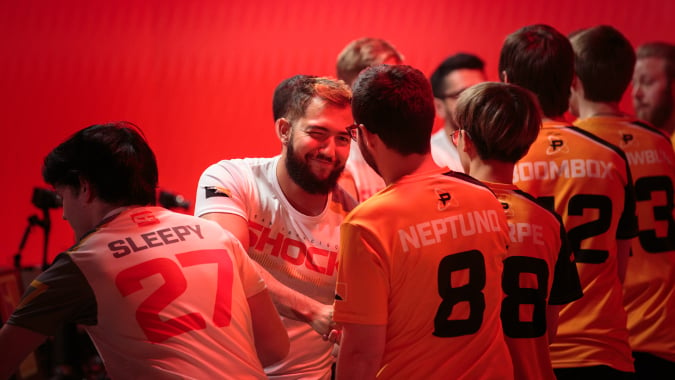 Week two of Overwatch League kicked off last night with a great series of games that stretched late into the night. Just in case you had to get up early, here’s a quick recap.

Game one was the Philadelphia Fusion against the San Francisco Shock, and dear me was the entire thing orange. The Shock was the team in white with the Fusion in their buyable skins, but even so the overall effect was pretty intensely orange. It was also the best match of the night, with both Shadowburn and Carpe making some fantastic moves for the Fusion while Babybay continued to grab a lot of picks with his McCree. The standout player was the Fusion’s Poko. He consistently threw out D.Va bombs that weren’t just disruptive, but were placed with precision for multiple kills. The one from the clip below on Dorado was particularly beautiful, hooking over the stalls at the last second to shut down Danteh’s Genji.

Match two had the Seoul Dynasty going up against the Florida Mayhem. Much like the times the Harlem Globetrotters would put in their second-stringers in against the Washington Generals so the match wasn’t too one-sided, the Dynasty put in two of their members who haven’t had a ton of playtime yet, swapping in Xepher and gido. Fleta continues to be a standout, with tons of picks from his high-impact Widowmaker.

The series between the Shanghai Dragons and the Houston Outlaws was a rout. The Dragons looked disorganized, to put it kindly. It seemed as though they were trying to adapt to a meta by using the characters they’ve seen everyone else using, but weren’t sure what to do with the tools at their disposal. Lots of deaths caused by greedy play, which meant they were staggered from the rest of the team. The Outlaws took advantage of this, particularly with the synergy shown by their tanks Muma and CoolMatt. They were teammates for Contenders, and they’ve grown into a fantastic unit, with Muma diving deep on Winston to disrupt, after which CoolMatt would cover his retreat.

There’s more action tonight. First match sees the boys in Dallas Fuel blue facing off against the green wall of the Houston Outlaws. The rivalry between their parent organizations, EnVyUs and OpTic Gaming, is one of the most heated in esports. Tune in at 4 p.m. CST to see whether the Outlaws can add the Fuel to that fire.