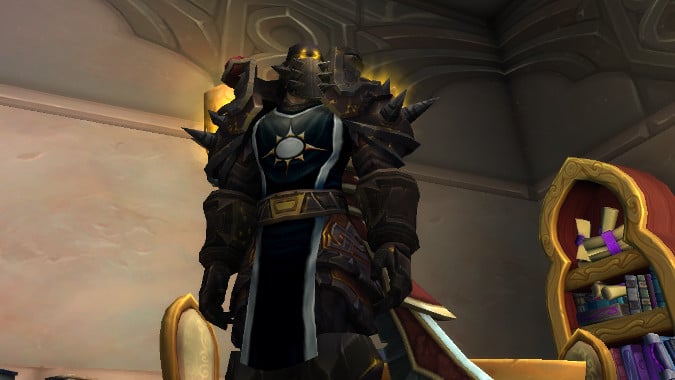 That’s right. The whole setting is just Jaina’s campaign. She’s still a kid growing up on Kul Tiras and literally everything that we’ve ever seen in a Warcraft game is just her imagining of exciting events in the world. That’s why it was Stonewind in the first campaign but ended up Stormwind in the second, that’s why the world keeps getting bigger — she just makes up new places whenever she needs a new place for her players to go explore — and that’s why poor Azeroth is the center of such ridiculous forces out to destroy it.

It’s the Queue, let’s talk Blizzard games. You know why? Because Jaina rolled for initiative.

Question for the Queue Thoughts on tabards not being purely skin tight on males and females? I think its great that the tabard looks physical now. No longer conform perfectly to pecs on males and boobs on females.

I’m going to be up front and admit that I haven’t worn a tabard since 2009. So I actually had to go to the Dalaran Visitor’s Center and buy back one of my old tabards just to check this out. I used the image of my Warrior… well, one of them… to illustrate that yeah, the tabard seems to be a bit looser than I remember but I can’t be sure on this. It has been a long time. Still, I think he looks okay.

Q4tQ: I noticed the legendary ring I got from the end of Antorus says “You haven’t collected this appearance yet” even after I equipped it. Is it supposed to have an appearance, or is it a bug that it says that?

It’s a bug and not limited to that one, either. I had it with the legendary trinket I have. But man, I wish rings and trinkets had an actual appearance and you could see them in some way.

Transmog people, If you delete a character do you lose the appearances that character unlocked for you? I’ve got some old toons and I’m worried about losing stuff no longer in the game.

No, but I would want to emphasize that you should absolutely log those characters on if you haven’t and make sure that their known appearances are loading in the Wardrobe before you delete them. I had to load one of my old Tauren three times before the weird old junk he had collected loaded in. It’s worth taking the time and making sure you have those appearances you want to collect before you delete them.

Question for the Queue: Has anything in Patch 3.5 or the spoilers for BfA made you think less of characters you had formerly been sympathetic for? I mean Khadgar taking his ball and going home leaves a bad taste in my mouth. If he feels so strongly about the rising tensions, why not intervene through the Kirin Tor? “Y’all are idiots, and we are putting you in time out.”

And, don’t get me started about the Nightborne.

No, but only because I already have a pretty low opinion of certain characters like Sylvanas. Now, I think Sylvanas is an excellent character in the sense that she generates a lot of story and conflict and drama and she’s got a lot going on character wise, but she’s evil and I’m not surprised when she does something evil by this point. Being undead has warped her to the point where her solution to being lonely was If I kill my sister I won’t be alone anymore so yeah.

Khadgar’s whole We must be neutral thing works fine when there’s a big threat like the Legion bearing down on us, but in the absence of an obvious threat like the Old Gods — and yeah, I know they’re still out there, but right now they’re not doing stuff like erupting out of the ground outside Wyrmrest Temple or sending a giant dragon to blow up things, so they’re easier to ignore — everyone always ends up fighting over something and he’s long since lost my patience.  I’m pretty sick of Khadgar.

So no, I’m not upset with or disappointed in anyone, because by now this is what I expect from them. I wish Lothar were here.

Q4tQ: the patch temporarily removed the option to transmog the fancy leather shoulders that Xavius dropped, which made people who had them super upset. What would you be most upset about if it just wasn’t in your tmog list anymore?

I mean, I don’t even use them that much, but if you told me I couldn’t use them, I’d be upset.

Okay, that’s the Queue for Friday, January 19th. I hope you all have a lovely weekend and I’ll see you around.

Blizzard Watch is made possible by people like you.
Please consider supporting our Patreon!
Filed Under: It’s Been A Heck Of A Week
Advertisement