Hearthstone Dungeon Run will adjust cards due to nerfs, but not add expansion cards 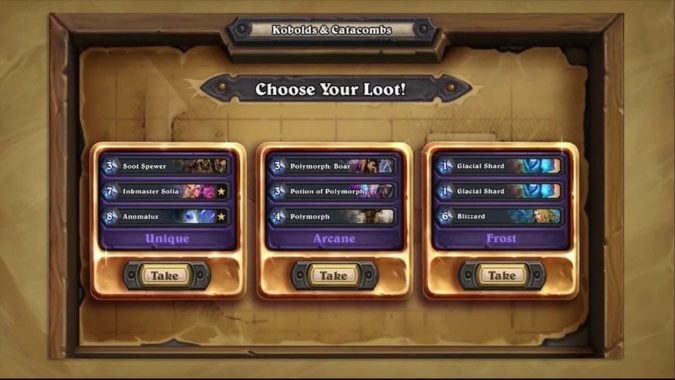 Hearthstone expansion Kobolds and Catacombs launched with the dark horse hit feature Dungeon Runs, which turned Hearthstone into a roguelike card game. The feature proved popular enough that it had an impact on other Blizzard services, causing delays in players receiving their Hearthstone daily quests. However, now that Kobolds and Catacombs is two months old, and with a few card nerfs on the horizon, players have begun to wonder about Dungeon Run’s fate and whether or not it will be maintained going forward.

Notably, Patches the Pirate is one of the cards on the chopping block for a nerf. Patches is losing his Charge ability, but Patches is included in the Charge-related card options in Dungeon Runs. Reddit user Vineron called attention to this on the Hearthstone subreddit, and Hearthstone developer Dave Kosak arrived to clear things up:

Yeah if mechanics change we’ll adjust the Dungeon Run – Patches is getting moved from the Charge! loot bucket, for instance.

Kosak also provided some information about the Dungeon Run feature as a whole:

The Kobolds & Catacombs Dungeon Run will stay as it is, with the current bosses and loot.

But remember, the plan going forward is to include unique mission content with every expansion, so Other Cool Stuff(tm) is in the works. Response to the Dungeon Run has been very positive, so it’s likely we’ll revisit that style of gameplay again in future sets.

Personally, I find this news both understandable and a little sad. I’m not a hardcore Hearthstone player anymore, but I had an absolute blast completing the Dungeon Run on every class. I’d love to see the feature continue to expand — but also understand what an enormous undertaking that would be. All of the Dungeon Run encounters are carefully tuned for the cards currently available. If every encounter needed to be retuned for another 100+ cards with every single expansion, it would quickly become an unwieldy monster. The Kobolds and Catacombs bosses are, most likely, better off staying Kobolds and Catacombs bosses and nothing more.

I do hope Hearthstone does revisit this style of content, though. While thematically appropriate for the current expansion, the Dungeon Run concept is too fun to never do it again. No, updating the Kobolds and Catacombs bosses for eternity isn’t viable — but I’d love a new set of bosses to tackle in future expansions.

Blizzard Watch is made possible by people like you.
Please consider supporting our Patreon!
Filed Under: Dave Kosak, Dungeon Run, Kobolds And Catacombs
Advertisement