New spells and visual effects in Battle for Azeroth 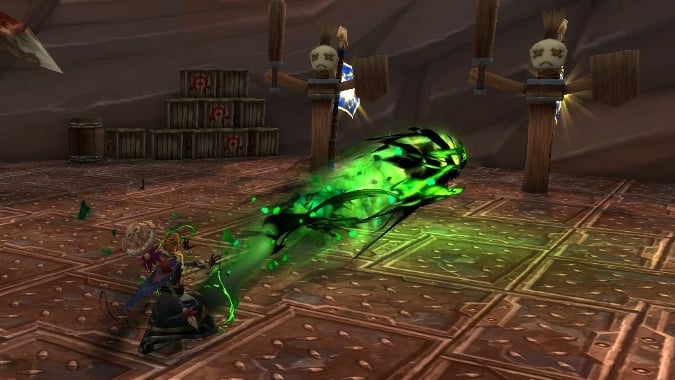 In the Battle for Azeroth alpha, a number of classes have already received some updated spell effects. While a variety of classes have received new visuals, Warlocks in particular have gotten visual updates to many core abilities. Thanks to Wowhead, even those of us without access to the alpha can get a sneak preview.

So far, the following Warlock spells have been updated:

Additionally, Soul Fire and Hellfire have returned to the class, along with brand new abilities Dark Soul and Deathbolt. Personally, I’m a fan of the new look for most of these spells, but I’m torn on the new Incinerate.

While the improved fire is nice, I feel something has been lost in translation. The fire is narrower than it used to be, which makes it lose some of its dramatic punch — and I might be mistaken, but it seems to zig-zag less than the live version, too. Incinerate’s snakelike behavior gave the spell a unique flair I’d hate to lose. Whatever the case, you can check out all of the new Destruction Warlock spell effects on Wowhead.

Again, while the Warlock updates are the most exciting, they aren’t the only class to receive changes in the most recent Battle for Azeroth build. The current class changes seem to be focused on introducing, re-introducing, or rebalancing various class buffs. Rogues have Expose Armor again, allowing them to bring a physical damage buff to raids, and Demon Hunters now have Chaos Brand, a magic damage buff. Druid Displacer Beast has been replaced with Tiger Dash, and Mages are no longer the sole owner of Spellsteal. In Battle for Azeroth, Death Knights currently have Thoughtseize, which not only steals a buff but allows the Death Knight to give it to an ally.

Hunters appear to be receiving changes more on the scale of what Warlocks are seeing. For Survival Hunters in particular, some traps and trap effects are being reimagined as different tools of the trade, though the effects are similar. For example, Survival Hunters now have Wildfire Bomb and Arctic Bola, both reminiscent of long-time traps. Personally, I think the class designers are pulling inspiration from the Diablo 3 Demon Hunter for some of these abilities — Hunters now have updated Rapid Fire and Chakrams, too.

Once again, head over to Wowhead for the full details — and in-motion previews of many more of these abilities.

Blizzard Watch is made possible by people like you.
Please consider supporting our Patreon!
Filed Under: Alpha, Battle For Azeroth, Destruction Warlock, Survival Hunter
Advertisement