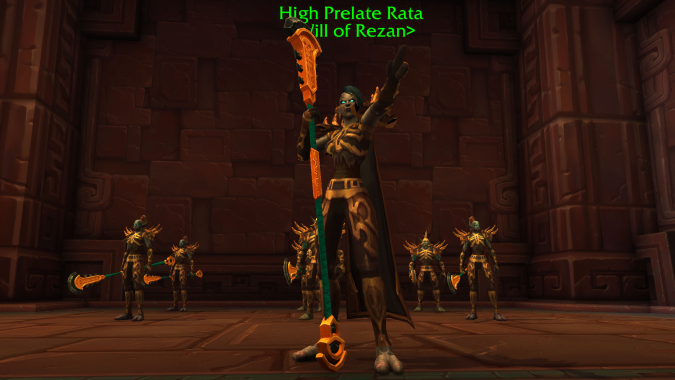 Back when alpha datamining for Battle for Azeroth began, players were on the lookout for the full list of classes available for Zandalari Trolls. Some players in particular wanted to see if Zandalari Trolls would be capable of being Paladins — after all, Throne of Thunder is full of Zandalari Prelates that almost exclusively use Paladin abilities. What better time to introduce Troll Paladins than with the Zandalari, right?

Wrong. When playable classes — Druid, Hunter, Mage, Priest, Rogue, Shaman, Warlock, and Warrior — were finally datamined, players were disappointed to see Paladins absent from the list. However, it turns out their absence isn’t just a random choice by the fickle designers at Blizzard. There is actually a lore-based reason for the lack of Zandalari Paladins — one only recently revealed thanks to the latest alpha questing experience.

If you somehow hadn’t figured it out yet, this post is going to contain spoilers. Specifically, an important part of the Zandalari storyline will be discussed below. You’ve been warned. 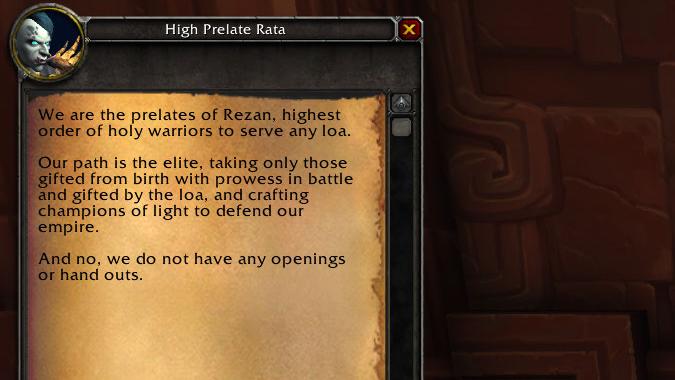 Not recruiting is part of it…

When you first arrive in Zuldazar, there’s a lot to explore. Like, a lot. In a lot of ways, the city-zone design reminds me of Suramar. There’s plenty of questing to be done and places for bad guys to patrol, but a solid chunk of Zuldazar is still city — at least the parts I’ve seen. One of those parts includes a small training hub for — you guessed it — Zandalari Prelates.

So if you thought Blizzard had maybe just forgotten about the possibility of Zandalari being Paladins, they hadn’t. But that doesn’t mean they were feeling generous, either. From the get-go, the leader of these Prelates, High Prelate Rata, makes it clear that Zandalari Paladins are elite, gifted from birth, and most importantly, not recruiting. But that still potentially leaves the door open, right?

Unfortunately, any hopes you might have had as a result of the High Prelate’s words get dashed when you quest further through Zuldazar. (Have I mentioned this post will have story spoilers yet? Because if you didn’t heed the warnings before, this is your last chance to turn away.) 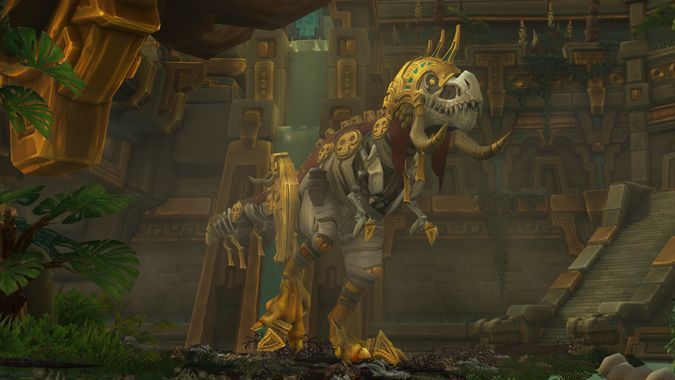 …but the other part is bigger

As part of the Zuldazar storyline, Zul is trying to overthrow the Zandalari — and he’s willing to go through some pretty extreme measures to make that happen. For example, he’s totally fine sacrificing loa to gain power. In an effort to stop Zul, several major Zandalari figures fight him, including Rezan, the loa who provides the Prelates with their power.

The cutscene isn’t implemented yet, but it’s noted that Zul murders Rezan in the battle, which also explains why Rezan’s reanimated body is a boss in the Atal’Dazar instance. After you’ve progressed past this point in the story, High Prelate Rata’s dialog is a little different. Rezan’s death has had a profound effect on the Prelates, one from which they may never recover:

The light of Rezan has left us. Only a handful of those that followed the great king of the loa will have any sort of power, and even they are suspect.

Our life was devotion itself. Now who do we become?

Unfortunately, this gives a pretty substantiated reason for cutting the Zandalari off from being Paladins when they join the Horde as an Allied Race. The in-game Prelates have largely lost their ability to invoke the Light, so what would make players any more likely to play as one? Of course, this does technically leave room for the Horde to introduce the Zandalari to other sources of Light, similar to the way the Tauren learned to become Paladins.

That said, such an introduction would not happen at the same time as Zandalari being introduced to the Horde, and even then, I’m not going to hold my breath. While I had no real intention of playing a Zandalari Paladin, I’m still sad — if appreciative — to see Blizzard put in such a concrete reason for their nonexistence.