Griftah is back in Battle for Azeroth, and now he has a toy 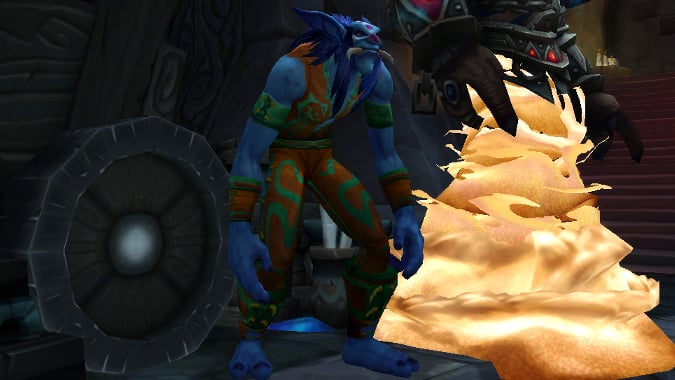 Though it sounds bizarre, Griftah is one of the oldest recurring characters in World of Warcraft. He first swindled us all the way back in Burning Crusade with his Soap on a Rope and Infallible Tikbalang Wards, among other utterly useless oddities. Though he gave Northrend a pass, he joined the Darkmoon Faire in Cataclysm, traveled to Pandaria to sell suckers a Problem Solving Pendant, became Rogues’ best friend on Draenor with the Secretive Whistle, and in Legion, he hangs out in the Rogue order hall offering genuinely lucrative business opportunities.

This lying, dirty cheat has had more screen time than most of Azeroth’s central figures and has outlived a fair number of them. And in the Battle for Azeroth alpha, he’s still up to his old tricks. First up, he offers a spread of grey items that each summon short-duration totem with no effect whatsoever. They cost 250g each and are one-time use items.

He also sells Bottled Azerite which does nothing but make you vomit.

However, if you’re willing to jump through some hoops, Griftah offers a brand new toy for your collection. With a 15-minute cooldown, the Zandalari Effigy Amulet creates an effigy of a targeted player — which you can then click on to stab with a variety of sharp implements. YouTuber and community member Nobbel87 shared a walkthrough for acquiring the item:

The process paints a rather grim picture of the Zandalari, what with trading severed Night Elf heads to children and all, but it’s precisely the kind of shenanigans you’d expect from Griftah. Starting everything off with a stolen sack of hearthstones is perfectly thematic.

Behind the scenes here at Blizzard Watch, a few of our staff members celebrated Griftah finally offering something useful for a change — but if you play a rogue, Griftah’s grifts have been making you rich for a few years now. Why yes, Griftah, I will take an essentially free 5,000g every Tuesday afternoon.

Blizzard Watch is made possible by people like you.
Please consider supporting our Patreon!
Filed Under: Battle For Azeroth, Griftah, Zandalari Effigy Amulet
Advertisement