The next season of competitive play in Heroes of the Storm begins in less than a week. Though exact starting times will vary by region, season 2 of 2018 ranked play is scheduled to begin March 6 and will continue until June 12. As usual, the season will provide a variety of cosmetic rewards, but this season also introduces some changes to how placement matches work.

In past ranked seasons, we’ve received a lot of feedback about the importance of placement games. We’ve made some changes this season to address that.

First, we will no longer boost the system’s uncertainty level in players’ matchmaking ratings (MMRs) at the start of a new ranked season. Previously, this uncertainty boost made movement more fluid during players’ initial matches each season. Removing it will smooth out cases where players could make considerable swings in rank over a relatively small number of games.

We’ve also received feedback that rising or falling more than one league (5 divisions) during placements can feel like too much movement over too short a timeframe. Removing the uncertainty boost will address this in most cases. To catch any outliers, we’ve also implemented a one-league cap on how much your rank can move as a result of placement matches.

Finally, first time ranked players cannot be seeded higher than Platinum 3 when they start placement matches. This is an older rule, but when combined with the changes mentioned above, the highest those players can exit placements will now be Diamond 3.

These changes are likely a direct response to some of the mishaps at the beginning of the previous ranked season. Placement matches swung players’ rank around so dramatically that where you placed when all was said and done almost felt arbitrary. Hopefully, these changes will not only prevent those dramatic swings, but also give the process some transparency so players can understand why they are where they are.

This season also, of course, includes the usual cosmetics of portraits and a mount. Interestingly, rather than showing off the finished product, Blizzard has given a preview of the new mount via its concept art: 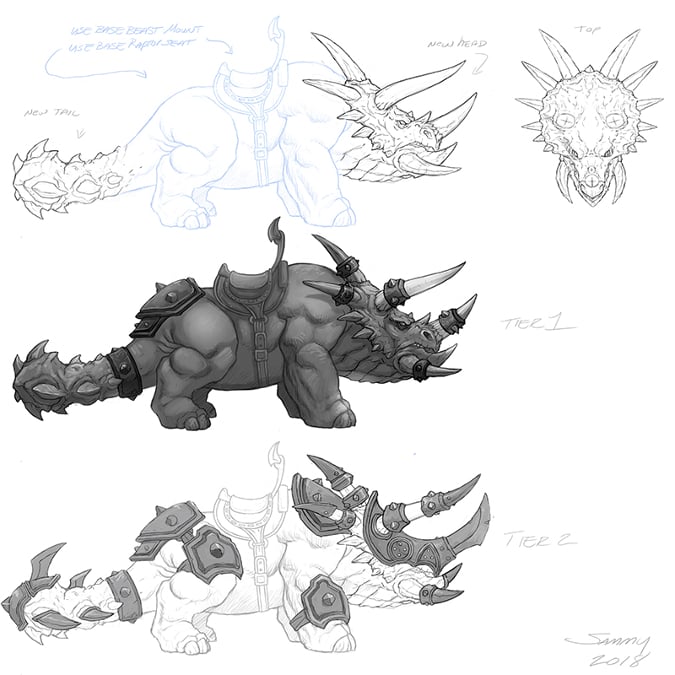 Personally, I actually find this concept art fascinating, because it provides insight into how the mount is constructed. The notes in the upper left specifically call out parts of previous mounts that can be recycled: the base body from the Battle Beast mount and the saddle from the raptor mounts. While those aspects might be recycled, the end result will still be a mount quite different from any we have in the game right now.

For a breakdown of rewards at every rank in both Hero League and Team League, head over to the official blog post.