The Queue: A Farewell to Elves 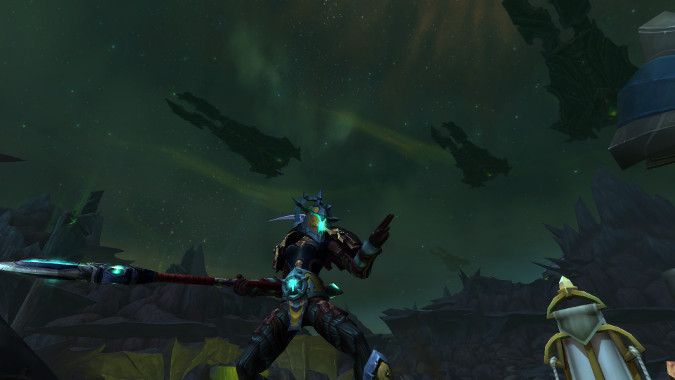 This Queue is dedicated to my Night Elf Warrior, who became my main in Legion. Before her, my Draenei Warrior was my main in Warlords and Mists of Pandaria, and my Tauren was my main in Cataclysm. One of the reasons I like having so many Warriors is so I can switch between them when an expansion feels thematically more suited to one of them, which I realize is kind of weird but whatever, you do you and I’ll do me.

I rolled a Lightforged and have been leveling him up, and hopefully he’ll be my main in Battle for Azeroth. I honestly have an RP reason why my Nelf is retiring. In the story as I tell it, she was utterly heartbroken by Thalyssra and the Nightborne choosing to join the Horde after all she did to save Suramar and likely she’ll die in the defense of Teldrassil, taking down a lot of Forsaken with her. Until we get there, she’s mostly tooling around Argus happily killing demons with her sidekick Darius Crowley, with no idea what the future will bring.

Just like my previous Warrior ended up retiring on Alt-Draenor, where he advises Yrel sometimes, and my Tauren died fighting Deathwing. Sometimes you gotta find a good way for them to go out. It’s a bit weird for me to keep leveling them as alts after I ‘kill’ them, but whatever, I’m not that consistent. I’m sure my Nelf will get leveled in Battle.

Anyway, here’s the Queue. Let’s get to it.

Q4tQ: Imonar the Soulhunter in Antorus talks about collecting bounties and as he dies, he says “I should never have taken this job.” That sort of makes it sound like he had a choice in the matter. How much “choice” do you think demons have in this case?

Not a lot considering we’re raiding Antorus — I mean, it’s their strongold, we’re the ones attacking them in this case. But Immonar’s whole deal is that he’s the Legion’s top tracker and hunter so it’s likely that he views every encounter through the lens of being the best and only taking the most challenging prey on, and if he’s that skilled it’s possible he’s had his pick in the past. After all, the Legion is enormous and has a lot of worlds under attack at any given time, so he couldn’t hunt every target and had to be at least somewhat discriminating.

So basically, unless someone like Kil’Jaeden, Archimonde or Sargeras said Go do this he likely could decide which enemies of the Legion got his special attention. But since we’re attacking Antorus, it’s unlikely he could have turned down this specific job. Still, once we kill him he likely still wishes he did.

Man, every so often I think about the fact that even with Sargy occupied and Killy J and Archie gone, there’s a huge host of demons out there, one big enough to invade multiple worlds at once, and now that Antorus is destroyed they may well be unable to portal easily but they’re still out there, you know? We may have cut off the head but the trashing of the body before it actually stops moving could do a lot of damage, and that’s assuming some enterprising demon doesn’t step into the void and find a way to bring it back together. Considering Mardum isn’t a prison anymore, and we know there were monstrously powerful demons out there like Ulthalesh before Sargeras showed up, it feels like we’ll have more demons sooner or later.

She is the eldest child of Terenas and Lianne Menethil, the older sister of Arthas Menethil, and the heir presumptive of the throne of Lordaeron although in the Legion alpha she’d stated she has no interest in the title as the Kingdom has been destroyed. (That text was removed, so we may hear her say differently in Battle for Azeroth if she makes an appearance.) As a Priest champion she even says “It’s just Calia now” meaning that she may well not even consider herself a Menethil.

I really hope they do more with her in Battle, because whether or not she wants to rule, she is the last remaining Menethil and Lordaeron is her home. At the same time, she’s worked alongside the undead Alonsus Faol (himself a Priest) and so she at least knows some undead she respects. It could be a very interesting story hook if it comes up at all.

I don’t know if I’m imagining this, but I decided to change my paladin’s ‘mog and I found I have quite a few plate chests that leave at least part of his torso bare.

I’m not sure if this is something that was always there (I’ve had him in purple judgement for a while, so it’s been some time since I’ve looked through the rest of the wardrobe), or if Blizzard have adjusted some of the armours to make them more sexy on males and/or better to show off lightforged tatts, or if he’s just been drinking far too much Thelsamar Pale Ale and his gear doesn’t fit him anymore.
Any ideas?

That is how the chestplate has always looked. In fact, I’ve been complaining for a couple of Queue’s now that it’s not revealing enough on males. You’ll find that there are BP’s from Vanilla that show almost everything on a female character. 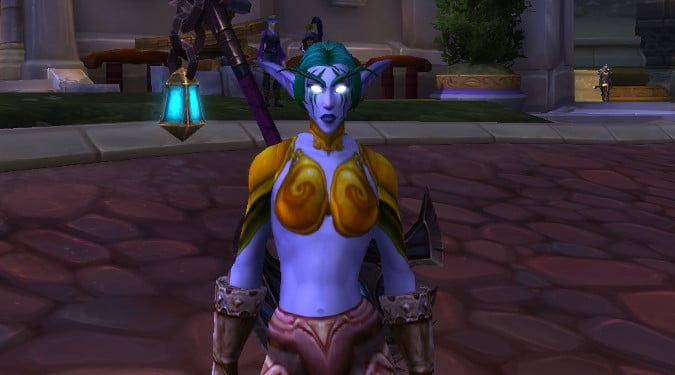 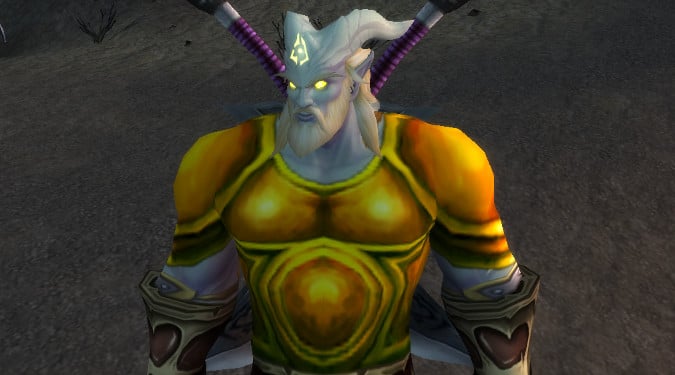 As you can see, it’s missing some things on the Night Elf, compared to the Draenei, and that’s entirely due to gender. Even the Hydralick you have mogged to is more revealing on female characters. On your character, it just reveals a bit of the midsection. On a Void Elf lady… 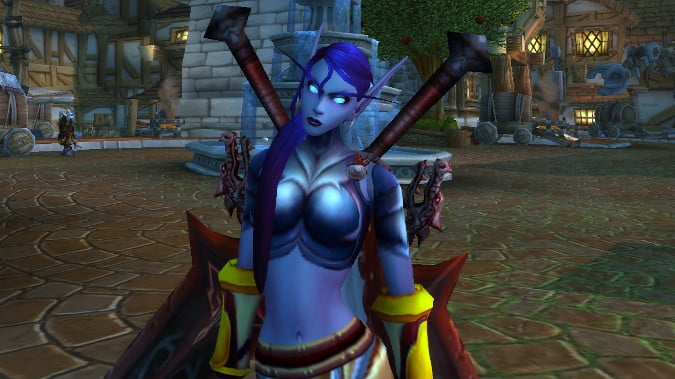 It’s a noticeable difference. I’d love to show off my Lightforged’s abs, but when he tries the same BP he gets this. 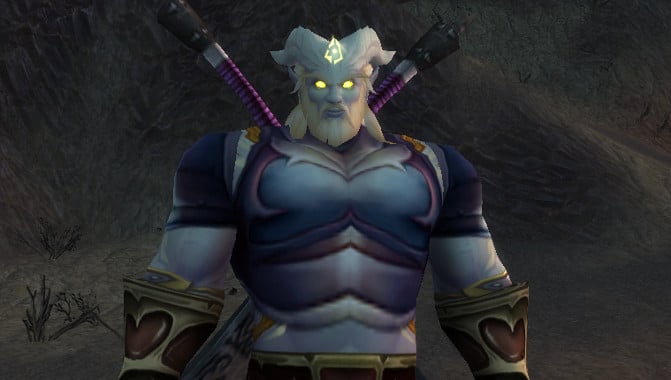 Again, that’s the exact same breastplate. It has a lot more material suddenly when you’re playing a guy, and that’s just unfair. That is not naked enough. I want to see every inch of my tattoos, Blizz.

Yes, I will find a way to nerd out about transmog every week, y’all.

Warriors are best for it, right? They can learn every appearance?

I did the quest on a Warrior and I can confirm that I have every appearance, even the Druid mace.

Q4tQ: There is a goblin on the Wandering Isle (Gakkiz Blusterblast), dressed in Monk gear. Maybe a hint of something to come, similar to our hope for Delas Moonfang and Night Elf paladins?

Well, he is a Goblin Monk and you can recruit him as a follower (at least Wowpedia says you can, I haven’t played a Monk this expansion) so… maybe? I really couldn’t say. It would be nice if some restrictions were loosened. Like, why can’t we have Lightforged Monks? Just say they have some weird space version of Monk disciplines and be done with it. 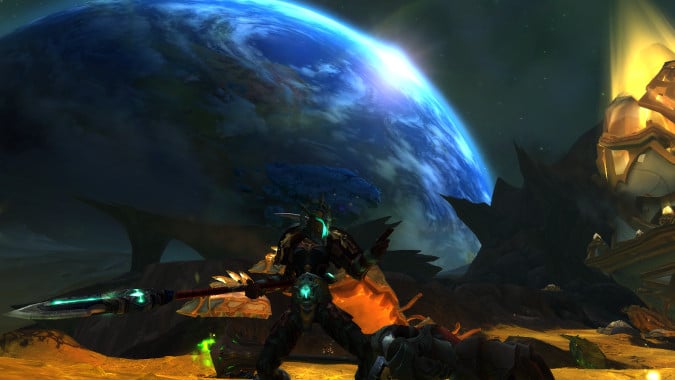 That’s it for the Queue this week. Leave some questions for Adam and I’ll see y’all next Friday. My Night Elf may or may not depending on how far I get my Lightforged.

Blizzard Watch is made possible by people like you.
Please consider supporting our Patreon!
Filed Under: Elunespeed You Crazy Nelf
Advertisement