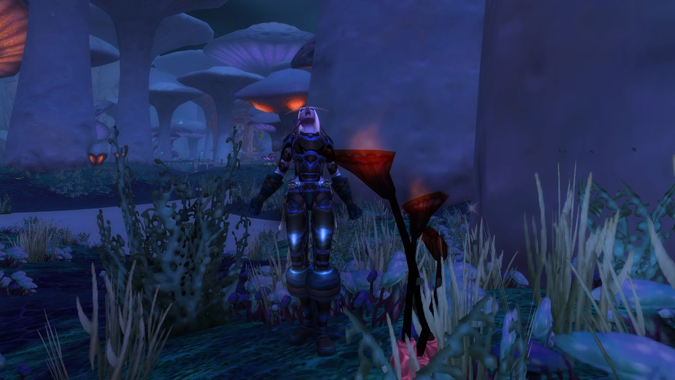 I spent a lot of time in Zangarmarsh leveling my Nightborne alt and trying to figure out why I was bugged. See, herb nodes are supposed to scale — meaning that in theory, you can pick any herb node, no matter where you are. This didn’t seem to be the case once I hit Outland, and I figured I had done something wrong. After many days of doing quests and wracking my brain trying to decipher what was wrong with my character, I moved on to Blade’s Edge. There, I promptly discovered I could pick everything in sight. So it turns out my character wasn’t bugged after all — I just managed to pick the one leveling zone that had bugged plant nodes.

Such is my luck. But hey, let’s answer your questions, shall we?

Movie Edition Lore-ish QftQ: A lot of this movie needed work, but I need some lore confirmation regarding Alodi and the fel. Consistently through the movie the flash of green fel in the eyes is indicative of fel corruption. Alodi not only led Khadgar to a book on the fel and the Dark Portal, but when speaking with him her eyes flashed green briefly as well.

So…had Alodi been touched (but not corrupted thanks to the self-imprisonment) by the fel? Is the book she (probably) wrote that Khadgar read implying there’s another portal, or the first invasion of Sargeras? Does this mean Medivh is Alodi’s son (given the strange way lore is intertwining in the movieverse)?

Alodi in the movie was a little odd — obviously in game he’s a he, first Guardian of Tirisfal and all that. In the movie, she’s a strange woman/entity locked in a cube that pre-dates the existence of the Kirin Tor. The Kirin Tor think the entity served in some kind of role similar to the Guardian, once upon a time. There’s a vague sort of implication that maybe she’s some kind of amalgam of Aegwynn and Alodi, but it’s never really defined.

However, she’s been touched by the fel one way or another. The eyes are a giveaway, but her face is also fel-scarred. So either she’s a fel creature, or she’s just been touched by it/fought it in some manner. Unfortunately, everything having to do with her is really, really unclear — and it doesn’t look like the movie is getting a sequel anytime soon. Unless Blizzard or Duncan Jones decides to start spilling about it, I don’t know if we’ll ever get a clear answer.

QftQ: Why do you think Blizzard hasn’t introduced a faction with democratically elected leaders into WoW yet? Which faction would be most likely to adopt democracy? Which faction is the most “woke”?

Actually, there is already a sort of democratic kind of system in place — the Gnomes elect a High Tinker, it’s not an inherited position. However, there doesn’t appear to be any limits on term length. The Gnomes just pick who they think is best suited to the position based on the merits of their work, and how they’ve benefited the Gnomish race.

I don’t know if I’d see one faction or another just kind of adopting democracy as a whole. Each faction is a group of allied races, and each race has their own system for choosing their individual leaders. At the moment, I think both sides have other, more pressing things to think about than the political structure of leadership. Although given Sylvanas’ actions, the Horde might be looking at acquiring a different Warchief at some point in the future — the Horde has easily been the most tumultuous of the factions, leadership-wise, in recent years.

Not as often as you’d think. Most of the time when a player wants to retire an RP character, they simply have them wander off somewhere and retire. This gives them an option to bring that character back at some point in the future, if they think they may want to do so.

Don’t get me wrong, I’ve seen players have their characters go down in a blaze of glory and all that — but those instances are few and far between. And that’s understandable. I mean, you get attached to the characters you write and roleplay. You want them to have if not a happy ending, at least a satisfying one where they get to continue on with their lives and be content. Nothing wrong with that!

Are the elves of Aszuna looking for a cure to live again or die, finally? Because that’s creepy to realize the Mixicology quest is “Darn, not dead-dead. Let’s try some murloc eyes. Maybe that will kill us for realz.”

I’d say no, they aren’t necessarily looking for that. But if you’re talking about Magister Garuhod — I don’t think he was specifically looking for that outcome, he just happened upon it in the Mixology quests. Keep in mind that the spirits of Aszuna are cursed. They can’t move on, even if they want to. That’s what you get for crossing Queen Azshara. That’s also why a lot of them are angry at Prince Farondis. They’re forced to wander the land as spirits indefinitely, because of what he did.

Question for the Queue Is there any hope that the rogue class mount might be given a sitting animation? It’s a cool mount but would be cooler if could perch on rooftops atop my giant raven.

As someone with the aforementioned Rogue mount, man I hope so. I rarely use it exactly for that reason — it’s big and unwieldy, and it hovers instead of actually landing. If it had a sitting animation, not to mention a run animation, I’d be a lot more likely to use it. I love everything else about it — including the summoning animation!

With BfA, the change to an existing zone is phased and you can go back to the old Silithus by talking to an NPC. (This is cool!) From a lore perspective, is this totally unique or do you think this could happen in other zones going forward? Or retroactively, do you think NPC’s could even offer a view into what Azeroth looked like pre-Cataclysm?

I don’t think it really “counts” from a lore perspective necessarily — it’s more like a game mechanic put in place so you can still do old Silithus quests and the like. You can see the same thing out in the Blasted Lands and in Theramore as well. I don’t expect they’ll do anything as large-scale as showing pre-Cataclysm stuff. I know they’ve announced they’re working on a classic version of WoW, but those old maps aren’t necessarily up-to date with the tech of the current game world. I think if they have any other major shakeups with current zones, we can expect to see that kind of tech going forward, though — I mean, it’s worked very well in the instances they’ve decided to use it, and they know how to implement it now.