Heroes of the Dorm has a finale location, plus a bracket challenge with a shot at $1M 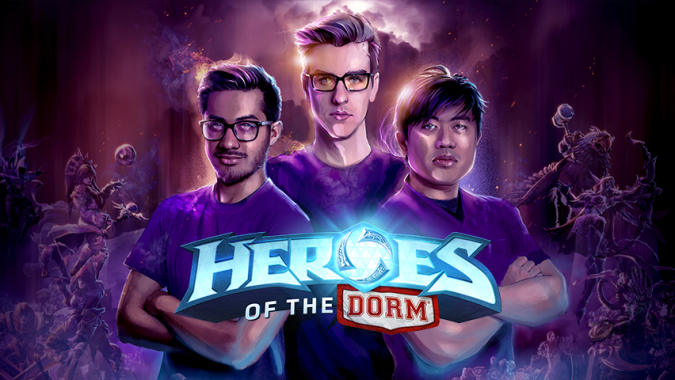 Heroes of the Dorm — the collegiate tournament for Heroes of the Storm players — officially kicked off early last month after a brief registration period in January. Since then, we’ve gone through both Seasonal and Regional play and have officially arrived at the Bracket Stage. This is the stage where things officially kick into high gear, as Blizzard has opened up the traditional Bracket Challenge. This Challenge, as you might expect, asks you to predict the outcomes of all the possible patches and rewards you handsomely for doing so. And by “handsomely,” I mean upwards of $1 million.

Now, that $1 million prize will require a perfect bracket, so it’s… well, it’s not very likely to happen. Even so, the best performing entry (assuming no one has a perfect bracket) will still win $10,000. Meanwhile the top 500 brackets will receive an in-game mount, and everyone who enters a bracket will receive an in-game spray. Whatever the odds, it doesn’t take too long to fill out a bracket, so why not do it? Just be advised, you only have until March 27 to fill yours out.

The other important bit from today’s announcement is that we finally have a location for the Heroic Four live event. In past years, we’ve seen the event take place at the Shrine Expo Hall in Los Angeles, the CenturyLink Field Event Center in Seattle, and UNLV in Las Vegas. This year, the competition is returning home to the Blizzard Arena in Burbank. Tickets are already on sale and won’t break the bank, so long as you live close by. Travel expenses could be another story — however, the event will be broadcast live on Twitch for all to see, no matter where you live.

The full announcement, as well as a link to statistical information on each team, can be seen below :

More than 300 competing schools have been whittled down to 64 as the Heroes of the Dorm tournament enters the knockout stage of the National Championship and offers fans a chance at glory with the Heroes of the Dorm Bracket Challenge. For 2018, the Bracket Challenge will not only award $10,000 for the entry that predicts the most winners, but a perfect bracket entry winner will receive $1 million for correctly picking all 63 matches.

While everybody will be chasing the top prize, all participants in the Bracket Challenge will receive a Heroes of the Storm in-game spray from Tespa just for submitting an entry. The top 500 best performing entries in the Bracket Challenge will also receive a special Heroes of the Dorm in-game mount customized to match the colors of the 2018 National Champions.

The $10,000 top prize for the Bracket Challenge will go to the best performing entry, but it’ll take something special to correctly pick every match in pursuit of that $1 million bonus. Predicting all those winners won’t be easy, but a full suite of tools to help fans gain the upper hand, including match replays and team statistics, is now available at heroesofthedorm.com/stats.

After championship events in Seattle (2016) and Las Vegas (2017), Heroes of the Dorm is coming home to the Blizzard Arena in Burbank, CA for 2018. Attending the Heroic Four live event at Blizzard Arena on Saturday May 12, where the semifinalists for the National Championship will battle to bring the tournament to a thrilling conclusion, should be the ultimate Heroes of the Dorm experience. As the premier venue for Blizzard esports, the Blizzard Arena will feature an on-site gear store and maybe a few other surprises for college esports fans in attendance.