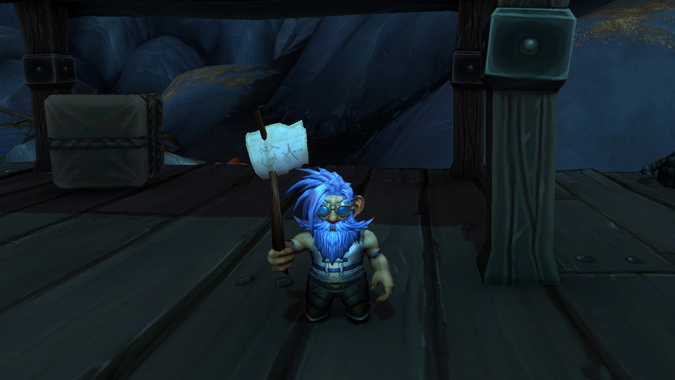 I think part of what I’m enjoying the most about Battle for Azeroth so far is just the variety in poses and animation. Like this gnome here, who is holding a very important sign involving something I won’t be spoiling. But he looks really important and official, doesn’t he? And I really want to know where he got those glasses, and where I can get a pair. Look, it shouldn’t be a surprise to anyone by now that as far as I’m concerned, anything transmog-worthy is of immediate interest.

You know what else is interesting? Your questions. Let’s answer some of those.

Q4TQ: Since we are giving up our Artifacts to save the World. Do you think we’ll see Khadgar do the same with Atiesh? B/c if not… screw that guy.

I don’t think we’re going to see Khadgar do anything, for the time being. He took off for parts unknown (by which I mean Karazhan). He’s not really  happy about the whole faction conflict thing, and he knows that the tentative ceasefire called because of the Legion threat is…well, pretty much over. I’m not sure how much we’ll actually see him in Battle for Azeroth, to be honest. It depends on where the expansion goes. I think if the world is in gigantic amounts of danger, he’ll pop up again. But for now, his work is done.

And Atiesh isn’t really an Artifact like the weapons we’ve gathered. It’s not for the likes of us, it’s for the Guardians of Tirisfal. It’s been passed from Guardian to Guardian right up to Medivh, and now it’s been handed to Khadgar, who is considered the new Guardian — or at least that’s what Medivh calls him in Karazhan. So he kind of needs that thing, to do his job. …mind you, with the Legion threat supposedly ended, it’s a good question as to what his job actually entails now. The Guardians of Tirisfal were pretty much founded to fight the Burning Legion and other demonic threats. We’ve done a pretty good job of dealing with that whole mess. Maybe part of the reason he took off was to head back to Karazhan and figure out exactly what his job is, now that the Legion is gone.

Q4tQ: do you think Blizzard is preparing Bolvar to be the main antagonist in a future expansion?

It certainly seems like everything in the game is pointing to that, doesn’t it? Mind you, this could go one of two ways. First, hey all those clues they’ve been throwing our direction are actually correct, and we’re going to have to fight Bolvar eventually — or rather, the thing that Bolvar has become, Lich King part 2, etc. Given everything we’ve seen out of Bolvar so far, that would make perfect sense. I mean, it’s kind of blatant, you know?

Alternatively, we’ve just been thrown a lot of red herrings that we’re misinterpreting, and Bolvar’s going to end up being the dude that rescues us in our darkest hours. But again, given everything we’ve seen out of Bolvar so far…well, it would be a stretch to consider him a hero at this point, to say the least. He’d have a lot of explaining to do.

The idea of the Scourge being used not as a weapon of destruction, but a weapon of salvation is a kind of tempting one, though. I mean, can you imagine it — we get to the worst big bad guy we can possibly imagine, we’re battered and nearly beaten, it looks like all hope is lost…and then Bolvar shows up with the Scourge at his back, ordering the mindless undead to essentially sacrifice themselves to save us all?

Q4TQ: Is there anywhere that has compiled all the sayings and interactions of the sentient artifacts?

Wowpedia does an excellent job of compiling these sorts of things. If you look up the individual Artifact weapon, like say….Xal’atath, there’s a quotes section that lists all the whispers. Fair warning, though — there are mountains of quotes to sift through. But that’s my go-to for quick reference when I need to see them all in one place.

Does anyone know what level a toon has to be to transmog heritage armor? I’m leveling a monk to 110 for heritage armor. Will I be able to make a priest and transmog my looms immediately?

Once you’ve unlocked it, you can transmog heritage armor right from the get-go — so level 20, since that’s the level Allied Races start at.

Qt4Q: What do you think BfA pre-expansion event will be like? Factions fighting all over the world? Old God stuff?

I feel like we’re building up to some kind of major showdown in Silithus — we got the lead-in for that at the end of Antorus. Both sides have been clued in to the existence of Azerite, and both sides are pretty keen on locking it down. Not to mention, you know, the gigantic who-knows-how-powerful sword that Sargeras plunged into the planet is kind of a concern as well. In that moment, Silithus went from dusty middle of nowhere to prominent point of interest. Neither side really has a “claim” to the zone. The notoriously neutral Cenarion Circle was pretty much its only residents…well, former residents now, but still. It’s not an area tied to one faction over the other, so unless the Alliance and Horde would like to politely share the area (and we know how likely that’s going to be), they’re going to need to duke it out for supremacy.

Something major is bound to happen. Something that kicks off everything else we’ve seen hints of since Battle for Azeroth’s announcement. I feel like we’re going to see more about that in the upcoming novel Before the Storm. It’s due out in June, and I think that’s going to be before we get any pre-expansion shenanigans in game. We’ll have to wait and see on that one, though!

Q4tQ: Do you use Blizzard’s built-in UI and how do you feel about the direction they’ve taken it? I use addons for just about everything on my gaming rig but I use a lot of the Blizz UI on my laptop because the addons use resources it doesn’t have. In most cases I can get by just fine without many addons but I’m a habitual tinkerer and am constantly tweaking the look of my UI in-game with addons.

The only time I use Blizzard’s default UI is when I’m playing on PTR or alpha/beta testing. I like using mods to rearrange the buttons and bars on the UI and make them take up less space. But in test situations, I don’t use addons at all. The whole point of testing is to look for bugs and other oddities in game. Adding an addon to that equation means that you could be viewing a bug on Blizzard’s end, which they can certainly fix — or you could be viewing a bug with the addon, which they can’t fix.

That said, I don’t mind the default Blizzard UI, and I do like the improvements they’ve added over the years. I just prefer being able to freely adjust the size and shape of bars and buttons to suit my own needs. I like my screen to be fairly uncluttered — the environments in WoW have only gotten better over the years. I prefer looking at all the pretty scenery, rather than looking at all the pretty scenery with a giant bar slapped on the bottom of my screen. The addons I use don’t really affect my performance so much as just a cosmetic kind of change. So not using them isn’t a big deal. It doesn’t kill my effectiveness when it comes to gameplay, it just means things don’t look the way I prefer.

Because I don’t like watching new anything, I’m once again rewatching Star Trek: Deep Space Nine. This was a novel and marvelous series that really touched on all the issues that the producers of Enterprise claimed they wanted to do, but did it a million times better (with less forgettable characters).

SO! Non Blizzard QftQ: Who are some of your favorite Trek characters (and no, Kirk and Picard don’t count)?

I added this on as a bonus question because oh I do like talking Star Trek every now and again — Deep Space Nine is still my favorite, but Discovery managed to take a close second. I don’t know if you “count” it as Star Trek, but I certainly do. Anyway, my favorite characters are usually the aliens — Garak in particular is probably my favorite from DS9, but I also really liked Dukat. And the Bajorans were all pretty great as well. Honestly, it was less about individual characters in that show and more about the dynamic between all these alien races that I enjoyed. Deep Space Nine wasn’t so much about the “let’s go explore the universe and discover new worlds and new civilizations” setup so much as “Hello, we’ve discovered these new worlds and new civilizations…now what?”

It’s the “now what” that interested me right off the bat. We see a lot of the Federation in…well, every Star Trek series out there. We don’t see a lot of the inner workings and political structure of other alien races. We get bits and pieces, but there’s never really a deep dive. Deep Space Nine made that dive and made it work really well. Humans are the aliens in the Alpha Quadrant, and that was illustrated really well throughout the series.

And just because I mentioned Discovery, I feel like — without spoilers, mind you — I should also mention Saru. He’s a Kelpien, the first one to join Starfleet, which is interesting in and of itself. Given the backstory of the Kelpien species, it only gets more interesting. Kelpiens are considered a prey species on their homeworld — they live in an almost constant state of fear. The fact that one of these Kelpiens decided to up and join Starfleet, not to mention how far Saru managed to progress during his time in Starfleet, is nothing sort of a fascinating miracle. I mean, he deliberately left a situation that was yes, frightening, but at least a known situation, to go someplace completely foreign. And there’s nothing quite so terrifying as the unknown. Makes me wonder what makes him tick — and I hope we see more of him in the future.