What do you want to see from Warcraft 4?

When people talk about Warcraft 4, there are two elephants in the room that they either tackle head on or pretend don’t exist. I’m going to try and do the former. The problem with Warcraft 4 is simple enough. First, the RTS genre has been in decline for years (since Warcraft 3 you could argue) and second, World of Warcraft exists. World of Warcraft has taken a popular RTS property that got periodic game releases and turned it into the dominant MMO, a game that gets updates every couple of years and content on a regular release schedule.

These factors combine to make Warcraft 4 difficult to imagine. What would a Warcraft RTS look like following in the wake of such a huge game with fairly constant updates? How could you design this hypothetical RTS without it either superseding or being eclipsed by the MMO? And what point is there to doing so in the game ecology we’re currently in?

The 4x genre is a familiar one to most gamers — it’s where games like the Civilization series can be found, or Master of Orion. Without giving you a history lesson, the 4x genre features the four pillars — exploration, expansion, exploitation, and extermination — and I guess the 4e genre wouldn’t have sounded as cool. Moving into the 4x genre would allow Warcraft 4 to regain a feeling of surprise and evoke a time when Azeroth wasn’t the focus of a vast MMO. It would feel like a new world where we didn’t have detailed maps of four continents and a host of islands that make discovery difficult. It could also allow Blizzard to branch out afrom the known world — it’s entirely possible for there to be other land masses on Azeroth, perhaps on the other side of the globe.

A 4x game would be tailor-made to explore such new worlds and set them up for future exploration in the MMO, after the events of Warcraft 4 played out. Blizzard could get as crunchy with new lands and new civilizations as they wanted. They could explain who these new civilizations are, what they’ve been doing, and how they fit into the greater Warcraft world.

The one X I feel like we could tone down or ignore is the “exterminate” one — in gameplay, sure, wipe your enemies out, but in terms of the story of the game I think Warcraft 4 should serve to add more to the toybox, not take anything away. In fact, I don’t think it should just even be limited to Azeroth.

A cosmic war crafted for you

Our trips to Argus and Draenor in the past two World of Warcraft expansions have me seeing all sorts of potential for further development and exploration of those and other worlds in a 4x setting. Imagine a game that started on Azeroth, exploring other lands and cultures, and then shifted to explore whole new worlds — even if Blizzard stuck to just worlds we’ve seen or heard of in WoW, there’s room for so much development.

There are worlds like Xoroth, once Legion-controlled, but now all roiling pits of demons battling for dominance. The worlds we explored through portals in Argus are all on the table — we saw six such worlds while we were running the rifts on Argus. What are Sangua, Bonich, Val, Aurinor, Naigtal, and Cen’gar like outside of those areas of Legion invasion? What were their people doing to resist the Legion before we arrived, if they were inhabited? There are other worlds we’ve never seen but have been hearing about for years. Besides the aforementioned Xoroth, there’s long-lost K’aresh rendered inhospitable by the Void. There’s the mystery of the Titans and what happens to the planets that contain World Souls when the World Soul’s awaken fully. Does the planet endure? Can we visit the worlds that became Aman’Thul, or Eonar, or Aggramar? Or even Sargeras? What are the worlds like after the Titans awaken?

A 4x game could explore all this and bring whole new races into the Warcraft setting.

The genre would be the perfect place to introduce all of this, and greatly expand the Warcraft setting in the process, without really directly interacting with the MMO. Azerothian factions could easily seek to explore the cosmos and come into conflict both with each other and with the people they find in the Great Dark Beyond while back on Azeroth the usual mayhem continues. 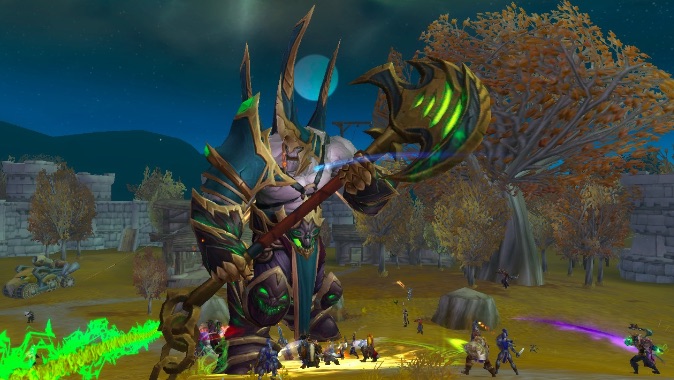 The best thing about this approach is that the two could feed each other. The MMO tends to take ideas from the setting and craft livable, explorable places for us to have adventures. That’s great, but often means they have to leave so much unexplored simply because of the time and resources it takes to create places like Suramar or Argus. We’ve gone to Argus, but while three whole zones is a huge deal for an end-of-expansion playground, it’s just scratching the surface of a whole alien world. Even expansions like The Burning Crusade and Warlords didn’t explore all of the world of Draenor. There’s only so much an MMO can give us and still ever actually come out.

With Warcraft 4, we could go to entirely new worlds and then have the things we find there come back to hit us on Azeroth.

The 4x genre is all about discovering new things and exploring the unexplored, but at the same time it’s usually at such a distance that whole cities are represented as points on a map — just giving us hints at the full world. A 4x game could generate enough content that the Warcraft setting would literally never catch up. Just a game set on the six worlds from the Argus rifts would be far more vast than any World of Warcraft expansion we’ve ever seen.

We’d get to go to new places, fight new people, and leave plenty to explore in the future. It would be a win/win, and a great way to bring Warcraft back to its roots while not being entirely derivative of them. A lot of 4x games bring RTS elements into them like Sins of a Solar Empire‘s Rebellion expansion did, and a Warcraft 4 that borrowed heavily from 4x could definitely still be an RTS, just a massive, expansive one.