Lunara gets her own Heroes of the Storm rework, not quite as drastic as Diablo’s 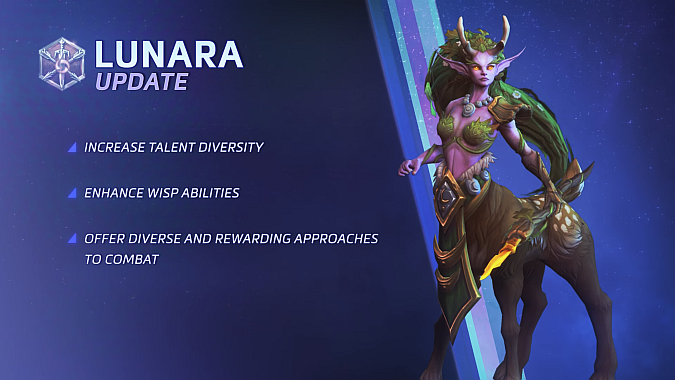 Yesterday, Heroes of the Storm dropped the surprise news that Diablo — the Hero, not the game — was receiving a major rework. Today, they’ve followed suit with yet another Rework Spolight, this time focusing on Lunara. While the rework doesn’t feel quite as substantial as Diablo’s, it still feels like an all-around positive direction to take the deadly Dryad.

As noted in the video, one of the major goals of this rework was to respect the current builds that players know and love.


As I mentioned above, the goal wasn’t to update Lunara in a way that invalidated the playstyles and talent builds regular Lunara players are accustomed to. Rather, they’re meant to improve the functionality of her Wisp and provide more synergy between certain talents. Similarly, her Nature’s Toxin received quite a bit of focus so as to really emphasize her as a poison-spreading Hero.

Below, you can see the changes made to most of Lunara’s talent tiers as revealed by the video. Talents in bold were specifically made note of in the video itself, either as brand-new talents or ones that have swapped talent tiers.

Misc. new talents (it’s unclear if these are level-13 or level-16 talents)

Overall, I’m pleased with these adjustments. It’s admittedly been a while since I’ve played Lunara in a serious capacity, but it seems that, like Diablo, she’ll have a bit more effectiveness in team fights now. I especially like the emphasis on spreading her poison to as many targets as possible — several of these talents will reward high-level DOT management. And it’s always fun to see what pros can do with high skill-cap Heroes!

Blizzard Watch is made possible by people like you.
Please consider supporting our Patreon!
Filed Under: Heroes Of The Storm Updates, Lunara, Lunara HotS, Lunara Rework
Advertisement