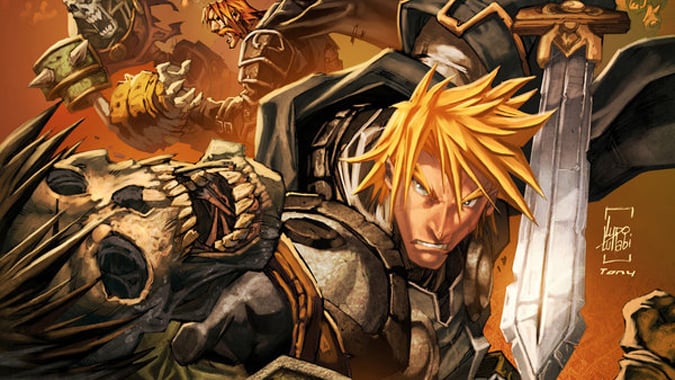 Death has haunted Darion Mograine, trailing just behind him from the very moment he was born. Not breathing, not alive, he was rushed to a stream in the arms of his father, Alexandros. There, in the freezing water, Darion took his first breath – the startled wail of someone who simply wasn’t meant to be. Although Darion lived, his mother did not. It was the first in a long string of tragedies that would follow Darion throughout his life, and beyond.

And perhaps that moment affected him more deeply than anyone realized. His mother died to bring him into the world, a seeming sacrifice, one life for another – his own. The notion of sacrifice, of selflessness, would continue on with Darion, almost an ingrained part of his existence. 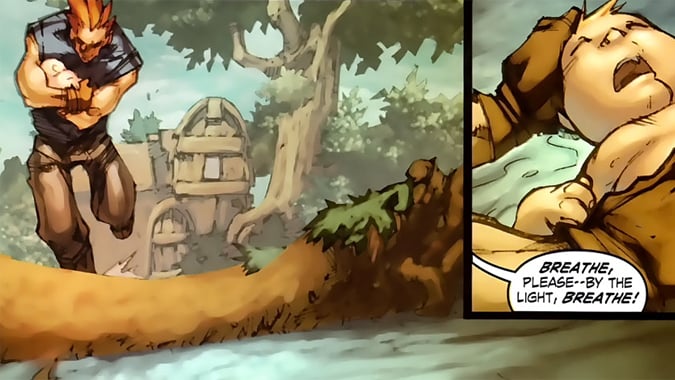 Darion’s early years were spent with his father and his older brother, Renault. Darion was his father’s favorite, and almost blatantly so. Where Renault was more like Alexandros in temperament, Darion was much more like his mother. Alexandros looked at the boy almost like a living reminder of his mother – the embodiment of everything she’d been. And Darion did his best to live up to his father’s expectations, eager to learn and fight at his father’s side.

Unfortunately, Darion’s childhood was marred by the rise of the Scourge. To combat the undead menace, Alexandros had a mighty blade forged from a relic suffused with the Light – the Ashbringer. He fully intended his son to wield it, one day. Together, the Mograine family and the former knights of the Silver Hand traveled to Stratholme, in hopes of eradicating the Scourge that lingered there. Alexandros asked Renault to watch over his brother, and make sure that Darion didn’t come to harm.

But the Scourge managed to strike out at the youngest Mograine. Darion was out for a full day before coming to – during which, Alexandros roundly chastised Renault for his failure to protect his brother. The schism between father and eldest son deepened…and the Burning Legion took the opportunity to move in. For while they valiantly fought in Stratholme, Lord Commander Saidan Dathrohan fell. He was replaced by the dreadlord Balnazzar, who hoped to bring down the surviving Silver Hand from within.

And Renault would prove a key part of his plans to do so. 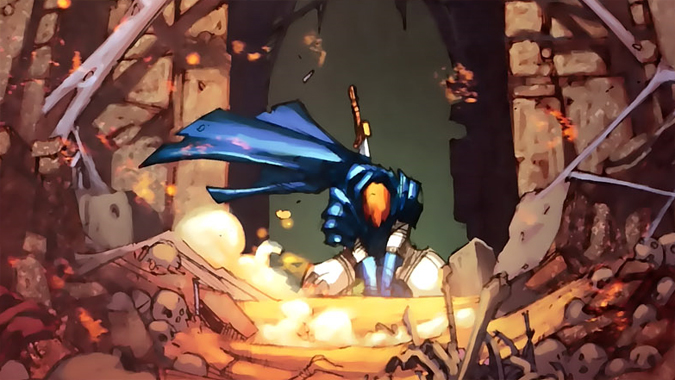 Balnazzar needed unimpeded command over the wayward remnants of the Silver Hand. Alexandros Mograine stood in his way. Lucky for Balnazzar, he had Renault to work with. Under the guise of Saidan Dathrohan, the demon took Renault Mograine under his wing, treating him with all the pride and respect he never received from his father. He promised the young man power and prestige, a place in the upper ranks of his Crusade, should he prove his worth – by killing his own father. And Renault fell for it, convinced that his father stood in the way of his own greatness.

Renault led Alexandros and his adviser, Fairbanks, to the gates of Stratholme, feeding them a lie that Darion had been kidnapped by the Scourge. Of course Alexandros leapt at the idea of his favored son in peril. And Renault’s resolve only grew stronger as a result. At the gates, Alexandros carved the Scourge to ash, fueled by the sight of Fairbanks seemingly falling in combat. When all was said and done, the Ashbringer fell from Alexandros’ exhausted hands.

Renault took up the blade, and ran his father through. And then he left, making his way back to the newly formed Scarlet Crusade, to eventually take his place as Scarlet Commander. But Alexandros wasn’t quite dead – both the Ashbringer and his corpse were befouled, corrupted by Renault’s dark deed. And Kel’Thuzad retrieved both body and blade, bringing Alexandros Mograine back from the dead to serve as one of the Four Horsemen. 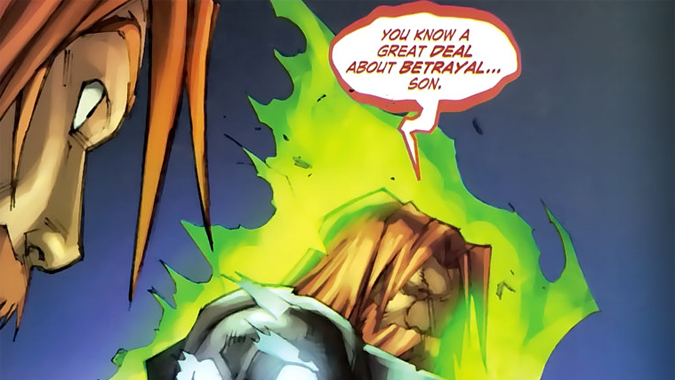 Darion Mograine was lost. His father’s death affected him deeply, and he began to question the Light. Fortunately, luck intervened in the form of a Troll Priest named Zabra Hexx. The Troll spoke of visions of Alexandros, in a fortress above a burning city – and Darion knew where he needed to go. He also had help from a new organization. The Argent Dawn was formed by Paladins that had splintered from the zealotry of the Scarlet Crusade. They believed the Crusade had fallen from its once-noble purpose – and Darion agreed with them.

Together, Darion and a few members of the Argent Dawn traveled to Naxxramas, the fortress Zabra saw in his visions. There, Darion learned his father’s fate as the group fought their way through the dread citadel. One by one, his compatriots fell, until only Darion remained – face to face with the dead visage of his father. Although they fought valiantly, Darion was the only one to make it out of Naxxramas alive, with the corrupted Ashbringer clutched in hand – his father’s voice whispering in his ears.

Darion returned to the Scarlet Crusade, and the scorn of his older brother. The sight of Darion infuriated Renault. The sight of the corrupted Ashbringer drove him absolutely mad. Enraged, Renault demanded his brother’s execution for his supposed betrayal of the Scarlet Crusade’s ideals. And at that moment, the spirit of Alexandros stepped forth from the tainted blade, beheading Renault where he stood. An instant later, Alexandros appeared to forgive his son – but he also vanished back into the blade. Once more, Darion was left with nothing. No father…and no brother.

But he still had hope. Hope that somehow, whatever corruption that darkened his father’s soul could be cleansed. 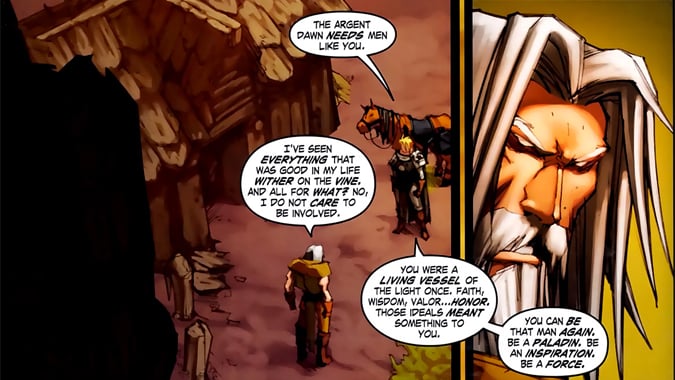 In a dream, Darion was visited by Fairbanks — now long dead — and told to seek out Tirion Fordring. Fordring was in exile, once a noble Paladin, now a mere hermit on the edge of the Eastern Plaguelands. He was reluctant to offer any help to Darion, telling the boy that nothing could be done. Eventually, he came around and suggested that only an act of love could save Alexandros — an act of love greater than the act of evil that claimed his father’s soul. Darion thanked him, suggesting that Tirion join the Argent Dawn, and left to rejoin the Argent Dawn himself at Light’s Hope.

Upon his arrival, he discovered that a Scourge army was about to attack. Overjoyed that Darion managed to return alive, the Argent Dawn told him why the Scourge was so interested in the spot. One thousand champions died to defend Lordaeron from Arthas and the Scourge. Those thousand powerful souls could not be allowed to be raised by the Scourge. And so, the bodies were recovered and taken to the remote chapel, interred in a crypt beneath the earth.

That night, Darion dreamed again. It was a restless dream, of drowning in black and inky depths — his father’s soul just out of reach, slipping into oblivion. In the morning, the Argent Dawn gathered to defend the chapel, and soon engaged in the first battle of Light’s Hope. It was a bloodbath. But just as the tide of battle seemed to turn against the Argent Dawn, Tirion Fordring arrived. With his help, they slowly began to gain more ground…and then Kel’Thuzad joined the battle. Darion, Ashbringer in hand, bravely leapt to battle the lich, but it did little to stop Kel’Thuzad. And then it occurred to Darion what Tirion’s words meant – what he must do. 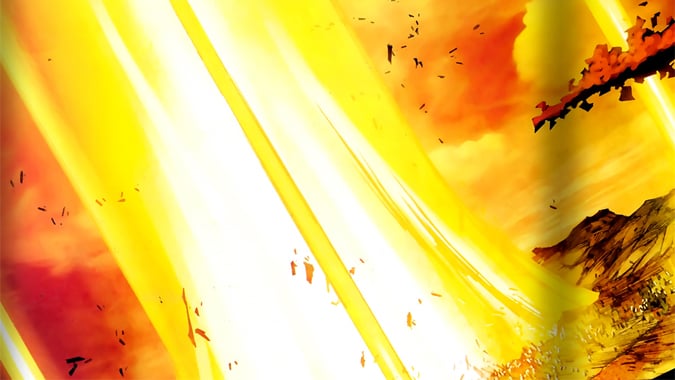 In one swift action, Darion ran himself through with the Ashbringer. His final words were of love for his father – and in response, the world exploded in Light. One thousand vengeful souls burst forth with one thousand columns of reckoning, obliterating the Scourge and purging it from the land. As he lay dying, Darion heard his father’s voice, one final time. Free of corruption, with nothing but words of love for his son. And in the end, all that remained of the Scourge were two figures on a hill – Kel’Thuzad…and Darion Mograine.

By selflessly sacrificing himself, Darion set his father’s soul free. But the price for his father’s soul was a heavy one. The last of the Mograine line had fallen, and now stood, lifeless and dull, in service of the Scourge. Death was not the end for Darion Mograine – it was only the beginning. Next week, we’ll continue the story of the last Mograine, and what lies beyond his mortal shell.