The story of Kalintai, Demon Hunter of the Alliance…sort of 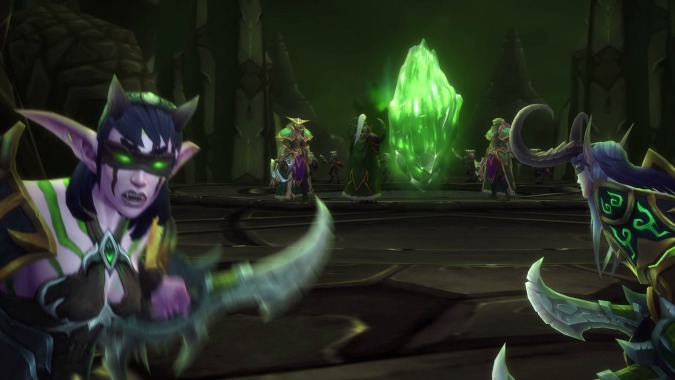 This character profile has been written for Kalintai, one of our supporters. If you enjoy it, you can check out the other profiles we’ve written, too!

It is known that Azeroth’s heroes, from the strongest warrior to the cleverest rogue, are no strangers to battle. For years they’ve toiled relentlessly in their pursuit of glory, peace, honor, or wealth beyond their wildest dreams. Each hero has their own story, full of daring deeds and dangers untold. Some heroes are brave. Some heroes prefer a life of caution.

For the Demon Hunter Kalintai, things just got downright weird — but let’s back up a bit.

Once upon a time, there was a Gnome named Flieg. Flieg was in search of knowledge — a search that led him down a darker path. Certainly Warlocks weren’t exactly smiled upon in the Alliance, but no one could argue their usefulness. And Flieg could hardly resist the lure of so much knowledge. After all, the most expedient way to defeat the horrors of the world was to learn their secrets, was it not?

Flieg set out to learn, and learn he did. Never settling anywhere for too long, always on the move, occasionally disappearing into his own endeavors, but incredibly capable in everything he sought to accomplish. Spirits and demons in particular were both fascinating prospects, rich with secrets of the unknown. And when word eventually came of an entire vault of imprisoned demons…well, how could Flieg possibly resist the tantalizing lure of so much information?

It was only a matter of time before the clever and curious Gnome managed to find his way into the Vault of the Wardens. There, a virtual buffet of demons awaited his inquisitive studies. But Flieg forgot one very important lesson: meddling with things you don’t understand requires extra care.

When he accidentally unleashed one member of said demonic buffet, that lesson came back in sharp relief…a little too late. The resultant backlash of fel energy popped his spirit right out of his body — the price of unchecked curiosity.

But we were talking about Kalintai, weren’t we?

There she was, simply minding her own business, in as much as one can after being imprisoned in a Vault by a bunch of Wardens. Upon the events of the previously mentioned brawl, Kalintai’s prison shattered — and she suddenly found herself the recipient of one slightly confused, but nonetheless fascinated Gnome Warlock spirit, and the target of the very demon he’d been fighting with in the first place. The demon was the easy part. She slew it handily, and absorbed its essence as if by reflex, bringing the count of creatures in her head to herself, one Gnome, and one angry demon, both of whom promptly set to arguing with each other.

Kalintai was having a perfectly terrible day.

Unfortunately, nothing could be done. The demon was one thing — as a Demon Hunter, she was used to the continued howling of demons in her skull. The Gnome was another thing entirely, insistent that she retrieve his body and get it out of that horrible Vault. Getting out of the Vault seemed like a good idea regardless, so she complied, strapping the not-quite-dead, not-quite-alive body of the Gnome to her back and carrying on with her escape.

She emerged to a fel-tinged sky and the worries of a world in dire peril. Certainly it was a terrible concern, but slightly less terrible than the internal argument between Gnome and demon ringing in her ears.

And so she began her journey — perhaps not quite as heroically as Azeroth’s greatest heroes, and with a slightly different mission in mind. Someday, she might even be able to return Flieg to his body…provided she can shut everyone in her brain up long enough to figure out how to do it.

Stranger things have happened, after all.

Blizzard Watch is made possible by people like you.
Please consider supporting our Patreon!
Filed Under: Supporter Character Profile, Supporter Only Posts