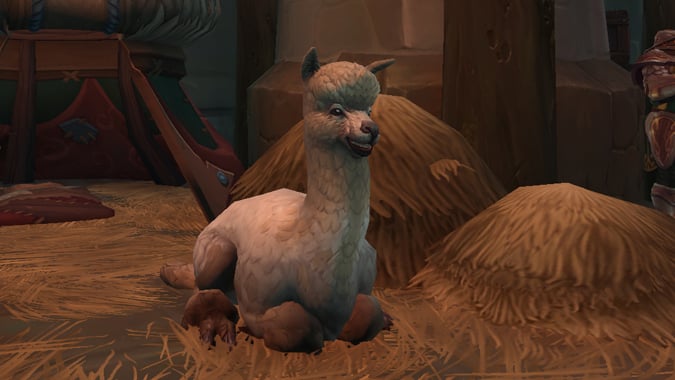 Maybe we didn’t get an Animal Crossing announcement for the Switch at E3, but at least I can find a charming and friendly alpaca in Battle for Azeroth, right? Look, I’ll take what I can get, and what I can get is absolutely adorable. Let’s answer your questions!

Qtf Engineers: What do you do to make gold on your Engineering toon?

I’m seriously considering making my Engineering toon my new main but I’m concerned. I’ve been a JC on my previous main which was always decent gold, and the other toon I’m considering as a main is a Alchemist which seems like free money.

Well, my Engineer is also a Rogue, which means I make a guaranteed 5k gold a week on the pickpocketing quest in my Class Hall.

…really though, there’s not an easy way to make gold from Engineering. It’s not anywhere near what I’d call a profitable profession, it’s more for the fun of having it. While you can pick up some gold from various items like Goblin Gliders, other professions are going to net you a lot more. Generally speaking, I don’t recommend Engineering if you’re trying to pull in buckets of gold. There are other professions — like Jewelcrafting or Alchemy — that will make you a lot more.

I’m assuming there’s some connection between Tiragarde and Tirisgarde – is that correct? If not, why are we thrown these confusing names…?

While one might think the two are related, they’ve got nothing to do with each other, besides the presence of the word “garde,” which might just be a common root word  in…well…Common. Tiragarde refers to a region in Kul Tiras, while Tirisgarde refers to the elite mages pulled together by the Council of Tirisfal, to hunt down Aegwynn after she went rogue. The Council of Tirisfal obviously took their name from the Tirisfal Glades. Both are Human in origin, so it makes sense that they’d have common roots, from a language standpoint.

Although it goes back a little further than Humanity. Tirisfal was named after the Watcher Tyr — the word means “Tyr’s fall” in the vrykul language. The name dates back to very origins of Humanity, when Vrykul children afflicted with the Curse of Flesh first fled Northrend along with Tyr.

Kul Tiras, on the other hand, wasn’t founded until thousands of years later, when the Arathi Empire began to splinter. We don’t have an origin or a meaning for the name Kul Tiras, but it’s possible it was just an evolution of the Tiris found in Tirisfall. In other words, there may be some small relation between the two words if you follow the language back far enough — but the two regions are two very distinctive, different things.

Have the Kul T’s classes been released yet?

The only class that has been absolutely confirmed so far for Kul Tirans is Druid — because obviously we’ve been seeing the Druid forms pop up. Other classes still haven’t been datamined or revealed just yet. I would assume a fairly straightforward list of melee and caster classes. The only classes I would say you shouldn’t expect are:

Mages are highly likely to be in the mix, as well as the standard Warrior/Hunter/Rogue. Considering that Kul Tiras has a wealth of visitors from overseas, it’s not out of place for Monks to be wandering around, either. Priests are likely as well. Along with Druids, that would put them at seven playable classes — the same as Void Elves, or Nightborne.

Keep in mind this is all speculation on my end, of course. We’ll have to wait and see what the final choices are!

A question about levelling in Northrend- Back when Wrath was current content, was it expected that you would already be level 80 before going to Icecrown? I’m currently levelling a Warlock through that zone (he just hit 77) and I am a bit taken aback at the number of quests that suggest/require a group.

Way back in Wrath of the Lich King, flying was still something new. Introduced in Burning Crusade, you couldn’t actually get flying until you hit level 70. In Wrath, you couldn’t get flying in Northrend until level 77. Not-so-coincidentally, that’s also right about when you hit a high enough level to quest in Icecrown. Icecrown was considered a max-level zone — players pretty much hit level 80 while zipping around the frozen peaks.

Perhaps because so many people were expected to be questing in the area, the zone also included a lot of group quests. It wasn’t a challenge or a problem to find a group in the early days of Wrath. The place was crawling with players. As the expansion wore on, however, it became harder and harder to find groups for said quests. It was one of the down sides of Wrath — there weren’t many of those, but they were there.

However, Icecrown also has some of the coolest quests in the expansion — no pun intended. If you can’t handle the group stuff solo at level 77, I suggest going back and trying again once you hit level 80. You’ll still get some leveling experience for the effort, but it’s mostly worth it from a story-experience perspective, if you’ve never done those quests before.

QFTQ — Is Battle for Azeroth going to have a stat squish?

It absolutely is, and you can see the results on the beta right now. In action, it feels just like any other stat squish. You still hit just as hard against enemies, they still fall in a reasonable amount of time. It’s just the numbers flying in the air that are different — they’re much, much smaller. Admittedly, it’s a little disconcerting when you first see it, but mobs still die in roughly the same amount of time, so there’s not really anything to be concerned about.

Question For The Queue What mini-game in WoW do you wish got more content done for it? I for one really hope we see the memory game from dalaran post office again.

I don’t really think there’s a mini-game that I wish had gotten more content done for it. But I do hope that they keep including little things like this in Battle for Azeroth. Things like the puzzles for the Riddler’s Mind-Worm, or the Lucid Nightmare, or even the post office like you mentioned. None of it was really story-heavy, it was all side stuff — but it was super fun, and it provided a different kind of content we don’t usually see.

I really like the whole idea of solving secret puzzles or riddles to get something cool. I think the community really liked it too. I don’t think it should be an automatic ‘any given expansion absolutely requires x amount of puzzles’ requirement or anything like that, but if Blizzard sees a place where they could throw in some mind games, I’d love to see it again.