The Queue: The prettiest of ponies 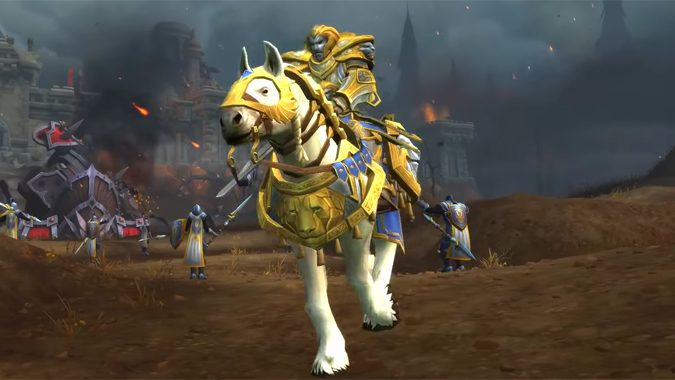 Look I know we’re in the middle of war and everything but can we just…take a step back for a minute and acknowledge the sheer gorgeousness of Anduin’s horse? According to Christie Golden, said beautiful pretty pony’s name is Reverence, which is a suitably majestic name for such a majestic steed. I mean, look at those lovely braids and sweet soulful eyes. All that fancy, shiny, ornate armor.

I guess what I’m trying to say here is Anduin, hand over the horse. I need it. That new mount achievement isn’t going to earn itself, you know.

Q4tQ: What are the chances Blizzard would ever decide to have the story merge the two factions? There were plenty of instances in the old Warcraft games of missions where Night Elves were fighting Night Elves, or Orcs vs Orcs, so why couldn’t they just go back to that story telling style? Seems like it would upset less people, as you could have just one main “Army of Azeroth” and have them fight bad guys all day long.

Ordinarily, I’d say no chance at all. The faction divide has been in place since day one, and it’s one of those backbones of the game, you know?

If Blizzard were to decide to do this thing, right now is pretty much the perfect time to make it happen. The current back and forth between the Alliance and the Horde is something on a scale we haven’t seen since the Second War. Yes, they fought in Pandaria — but in the end, they were fighting against Garrosh, and both factions joined in to do that. This is different, because both factions are clearly squared off against each other. It’s brutal.

But this also means that at some point, it’s going to have to come to an end. I don’t really know how long Blizzard can keep this whole war between factions relevant without a satisfying resolution of some sort. There comes a point where the story is so over-saturated with something that players will inevitably get tired of it. People got tired of Thrall. They got tired of Khadgar, too. The more you feature someone or something, the less impact it has. Eventually all the “Oh wow” reactions will turn to “This again, really?”

So I don’t…know what Blizzard has planned here. Obviously the only things we’ve been privy too so far on the beta are the leveling experiences in Kul Tiras and Zandalar. While both are amazing experiences, they don’t directly address all the stuff that’s happened in the last couple of weeks, or bring that conflict to any kind of resolution. We’ll have to wait and see how the rest of the expansion plays out to find out where Blizzard takes this one.

But if — and that’s a big if — Blizzard ever wanted to unite the factions in one fashion or another, this would be the expansion to do just that.

QftQ: If your main (in this case, most self-identified) WoW character was moved to the Overwatch world, which group would they belong to? Talon? Overwatch? Blackwatch? Freelance?

My main is pretty close to Sombra in terms of what she’s doing — but unlike Sombra, she’d never side with Talon, even in the name of infiltration. So I’d say freelance, just because she’s really not invested in the idea of choosing sides. She’s got bigger things to do.

So are there any quests leading up to the Lordaeron scenario? Or do you just get sent from your capital into the fray and it’s assumed you missed out on the Brill attack?

Well….there’s the last couple of weeks of quests and events in Darkshore. I mean, all of that led up to this.

But if you’re talking about additional content released this week, nope! You log in, and you get the quest that sends you to fight in the scenario. No other lead-in necessary.

Where do the first quests for BfA begin? Stormwind/Orgrimmar? I want to know where my characters should log out, to be ready to go on the first day.

If I recall correctly from the beta, you’ll be getting some quests in your capital city. So log out in Stormwind on Alliance side, or Orgrimmar on Horde side. I want to say they start in your respective capital cities throne rooms, so I’d say park just outside. If they do pop up somewhere else, you can just mount up and fly over fairly quickly.

So, are there any new WQs or anything after the scenario like last time that they don’t tell you about? I just got dumped back onto the Stormwind docks. Is that the end until next week?

There aren’t, not this week. You’ll pick up on more quests — including the one that gives you the Heart of Azeroth — when Battle for Azeroth kicks off next week. In the meantime, you can continue to do World Quests out in Darkshore for gear upgrades if you need them, or just hang out and knock off some random achievements. Not too much longer to wait!

Did Jaina fly that boat to the Undercity all by herself? I don’t remember seeing any Kul Tirans on it.

She absolutely did — and there is not a soul on Kul Tiras who would agree to help her right now, at least if that song about her is any indication. She’s not exactly…popular…in Kul Tiras.

Make no mistake — Jaina is pretty much the most powerful human sorceress alive. She was Antonidas’ apprentice — she learned from the best at the time. No one really holds a candle to her. She doesn’t really need any help to magically sail a ship around, she’s got that covered.