The Queue: Basic Campfire for next Allied Race 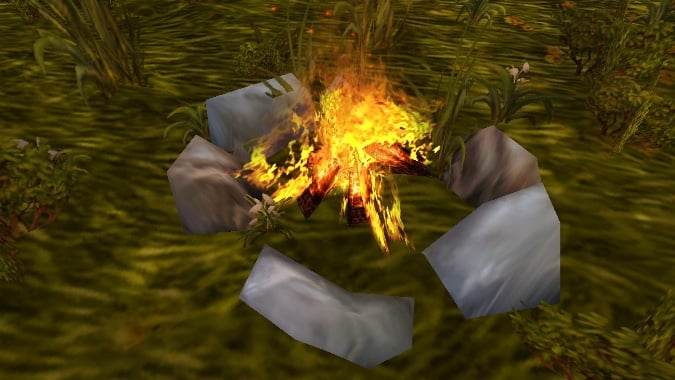 You just keep talking about Vulpera and Sethrak as Allied Races but you’re wrong. There is only one possible choice for Allied Race. It’s someone who’s been with us since the beginning. A constant companion providing light, hope, and a little buff to our spirit. (Because we could always use a little more spirit, right?)

Basic Campfire is the only choice for the next Allied Race.

Campfires will be able to chose between Mages and Warlocks and their customization options let you tweak their flame color and pattern. You can’t tell me you wouldn’t roll Basic Campfire, you just can’t, because Basic Campfire is just that awesome.

I’m probably in the minority here, but I’m really tired of allied races and I don’t even have one yet. At some level, I feel like the allied races are just Blizz devs phoning it in. But at the same time they add absolutely nothing to the game for me and I wish they’d spend some of that energy on other things. I can only play so many characters. The ones I already have I’m attached to and I have no plans to race change or abandon. So the allied races won’t happen for me. I wish all the new druid forms were something any druid could earn instead of requiring a whole new druid.

Like Anne, I think these are about customization. They have a tiny bit of a story quest at the beginning, and after that they’re just a new option in the character creation screen. It’s like picking a new hairstyle, except it’s a new race.

And I’m not sure that much work for Blizzard, since they’re using existing race models with new skins. It’s certainly some time and effort for the benefit of customization, but I’m not sure it’s costing us a raid tier or anything.

I also don’t really think of Allied Races as content. I changed my Blood Elf’s eyes this expansion, and I like them… but I don’t like them more than I like questing or running dungeons. I wouldn’t want the new eye style instead of other game content, but it’s a small addition that I like. I have a few Allied Race characters, and I’m absolutely rolling a terrifying wickerpunk Druid at the first possible second. But I still need other stuff in the game, and so far I think Blizzard has delivered on the content front. There’s a ton to do, so I can’t hold a grudge against Allied Races. It’s not like we’re talking about music boxes in patch 6.1 or anything…

So I finally bit the bullet and resubscribed.

Since my kids were born years ago I have worked the opposite shifts of my wife and life has been insane. It left me no time for wow. This means the last time I played was when I leveled through Warlords at release and then stopped because life was just too busy.

Holy crap is it shocking to come back after that many years.

How many glasses of scotch will I go through after work tonight sorting through all the changes since then? I peeked last night before bed and I didn’t have the stones to take a crack at it yet.

I think with the amount of change in the last two expansions, you probably have to step back and treat it like a new game. The bones will be familiar, but a lot of details have changed. So it’s mostly a question of how many glasses of scotch it takes you to deal with change. I’m not sure that’s a fixed number for any of us.

Everything old is new again and everything new is old again. Welcome back to WoW, Geoff.

TAUREN IT UP ASKED:

I haven’t but now I really, really want to.

Q4tQ: When using the Azerite armour (with those perks you unlock in it), do you prefer the spec-bound perks or the perks that are open to all specs and roles?

Is that you, Jay? I was shy a couple of questions and so hopped into the Queue questions channel on Discord. If it’s not you we’re going to have to figure out who is rudely impersonating you… but either way, I think this is an interesting question.

While I don’t think this will hold true for all classes, Azerite Armor really feels like the illusion of choice, particularly for hybrids. I play a Monk, so I can tank, heal or DPS. Whenever I get a piece of Azerite gear, I have the choice of offense, defense, or healing ability. Some are spec specific and some aren’t, but they all break down into those blocks. Right now, I’m still leveling (life’s been kind of nuts this week) so I pick either an offensive or defensive trait, depending on what’s available. I’m leveling in Mistweaver spec, so that means I’m usually picking the all-specs trait. I need something that will help me kick things in the face and survive being kicked in the face.

But when I get to the point where I’m mostly running dungeons… I’m just going to take every healing trait. Defense could be useful sometimes, but damage will almost never be useful. So whatever the healing trait is, I’ll pick it. And if I need to hop into Windwalker — I haven’t been lately, because Mistweavers are perfectly competent at kicking people in the face — I’ll go for all damage-dealing traits.

I don’t play a lot of pure-DPS classes, and haven’t given any a try since launch, so maybe they feel better. But on a hybrid, it doesn’t feel like there’s much of a choice at all.

Hey um….maybe doesn’t need to be answered in the queue, but when I browse the website in a browser and get to the bottom, the “see more” bar says “Learn more about the new (insert literally any expansion) expansion here!” and when you refresh the page it changes. Not sure if it’s intentional, because, in case you all at Blizzard Watch didn’t watch, the new expansion is named Battle for Azeroth.

This was answered in the comments but I thought I would repeat it here because people do ask every now and then. This is an in-joke. Back in the old days of WoW Insider we had zero control over what the site looked like. We could write text and put graphics in posts. There were a couple of elements in the sidebar we could edit. But most of the site was a black box to us. We could not see it or touch it, only send pleas to the development team to make edits for us.

But the devs were busy people and most of them didn’t even know the company had a site called WoW Insider, so it was really, really hard to get anyone’s attention. (You think I’m kidding, but I’m not. I still sometimes get emails forwarded to my @weblogs email address, which was the company that ran WoW Insider before AOL bought them. I haven’t worked for AOL in a while, but no one seems to have ever cut off that mailbox.)

At any rate, someone was persuaded to change the site title to “the latest news on Mists of Pandaria,” but no one could be convinced to change it again. Our utter powerlessness over this tiny piece of information rankled and lead to despondency. What power did we have over the site we’d spent so many years on when we couldn’t get anyone to change even one piece of text? Apparently we had no power at all, which has led us to where we are now.

The whole thing is a lot funnier in hindsight. Call the current button, which randomly picks an expansion, a homage.

YOU KNOW WHAT SHOULD BE THE NEXT ALLIED RACE?!?!

There. It’s been with us since the very beginning. A constant friend. An impetus to do things and an informant.

And that’s all I have for you today, my Queuefriends. I hope you all have a lovely weekend of gaming and remember to vote Basic Campfire for Allied Race!