The Queue: All hail the mighty Cube 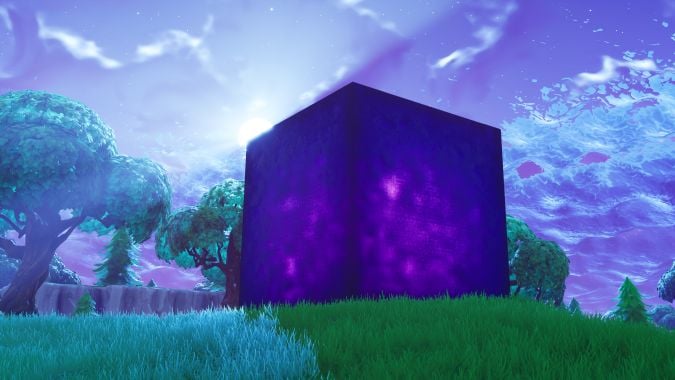 It’s been a little while since I wrote about Fortnite in one of these intros, but it’s about time to do so again. Why? Because a few weeks back, the mysterious crack in the sky disappeared — but it left behind a gift! That gift was the mysterious Cube, which spawned after lightning struck the same area several times over the course of a day or so. When the Cube finally appeared, players noticed it would bounce them away if they touched it, as well as lash out at anyone nearby if attacked.

Then, it started moving.

It’s moved pretty far at this point, and it’s already left behind two runes surrounded areas of low-gravity. Oh, and at one point during the Summer Skirmish, it made everyone float — literally no one had seen that before or expected it (not everyone found it as funny as I did). All in all, the mystery of the Cube and where it’s going is yet another example of Fortnite keeping players intrigued through seemingly small changes that are clearly building toward something big.

Anyhow, I suppose it’s time we talk Blizzard, huh? This is The Queue.

ARTHONOS HAS A QUESTION FOR ME PERSONALLY:

Assuming that the comments section is light on questions: Mitch how are you finding Shadow 3 weeks into the expansion?

It’s hard to say for certain, because I’ve had enough time to adjust and get the idea of how to play as best as I can, and in that regard, it’s not terrible. That said, it’s still clunky. I’ve adjusted to the clunkiness to the point where I notice it less than when I was playing Legion and the BFA beta at the same time, but not enough to where I’m not still hoping 8.1 changes things soon. There are just so many things about Shadow in BFA that boggle me in terms of what Blizzard was thinking when making the spec.

I don’t want to spend the whole Queue ranting about Shadow, but the short version is that I’ve adjusted but I still don’t love it.

SPENCER MORGAN ASKS ABOUT A WHOLE DIFFERENT WORLD (OF WARCRAFT):

Q4tQ: would BfA’s story so far have worked better in a single player game? Something in the same vein as Witcher 3, or Dragon Age. The PvE content we’ve experienced so far wants us to be both the champion of Azeroth struggling to save a dying world, and the big damn hero of the Alliance/Horde; who is willing to weaponize the very lifeblood of that same planet. A single player game could split these choices into their own story arcs; leaving the path untraveled to be experience during new game+.

I feel no particular need to head-canon everything my character participates in, as it’s own coherent timeline. I’m not everyone playing this game though, and for others. This narrative that pushes us to be both savior and despoiler simultaneously must be rather jarring.

A single-player game’s story is almost always going to allow for more opportunities for nuance and decision-making. I mean, when you think about it, what aspects of WoW’s storytelling are done better because of the game’s status as an MMO? One could argue dungeons and raids, which do offer story beats, couldn’t be offered in a single-player game — but that’s not entirely true. They wouldn’t be the same mechanically, but you could always experience the story by playing through the dungeons/raids in a world where they’re designed for a single player.

I don’t mean any of this to imply I’d prefer WoW as a single-player game, mind you. But I genuinely am not sure how a game’s story presentation would benefit more from being an MMO than a single-player game. As far as BFA is concerned, it definitely has a lot of moments where it would be cool to pick between two paths rather than follow one — but it’s not the first expansion to have that, and it won’t be the last.

YANA_WHO WANTS TO KNOW ALL ABOUT BONUS ROLLS:

Anyone know what BfA’s bonus roll tokens system is going to be? IE, where we get them, and what they cost.

Wowhead has a solid rundown of the minutiae, but the roll system is similar to what we’ve had in the past. However, you can only get two per week and up to a maximum of five, while the cost for each has also been upped*. They’re sold near the transmog people in your faction’s BFA capital.

*The rate you acquire certain resources has changed, so it’s not directly comparable. Also, there’s always a chance things have changed since beta.

KALCHEUS HAS GOT A THEORY!

Q4tQ: do you think Blizz will give us a Naga Murloc companion with the Virtual Ticket this year?

As cool as that would be, I think we’ll get something more out of left field than that. I don’t know what (hence, left field), but a Nagaloc feels predictable. Again, it also sounds cool and I really hope we still get one at some point, but I’m not sure about BlizzCon being that point.

Is it sad I want the virtual ticket just for the pet? If I get a job I won’t be able to take it off, but I want the swag.

Nope! Not sad at all. We all have our reasons for buying what we buy, and if you have the cash for a Virtual Ticket and buying it won’t adversely affect anyone/anything, then why would it be sad?

Now, if you can choose between feeding your hungry child and buying the Virtual Ticket, that’s a different story. You should be slowly reducing the child’s overall food during the course of the next few weeks so it’s used to a smaller amount by November and, thus, won’t be hungry. This eliminates any questions of guilt. Thank me later.

STEWART TOLHURST, I CAN’T QUITE ANSWER THIS…

Q4TQ: I don’t plan on raiding, but I hope to do Heroics and maybe normal Mythics with guild. Should I give up on Feral (which is still one of the hardest DPS classes to play as far as I can tell) for groups and get some Boomkin gear? Or should I just use my Druid for WQ and level up a caster (race change my Shaman to DI when I get the rep sorted?)?

If you’re running with your guild, I would hope they understand that Feral isn’t in a perfect place right now but still be willing to run with you if that’s what you want to play. I’m of the opinion that you should play whatever class/spec you want to play, so long as you’re actually enjoying what you’re doing. Granted, if you’re getting others killed in runs because of Feral, you need to git gud figure out how to avoid doing that first.

RALEIGH WALSH, I HAVE GOOD NEWS AND BAD NEWS:

Do you think its intended that one doesn’t get BfA tradeskill points completing DMF tradeskill quests?

Yes, this is intended. However, Blizzard realizes that it’s not great and is looking to improve it in the future. If you have ideas for how to make that happen, submit ’em!

JALAMENOS WANTS MY TRIAL WITH HIS STYLE:

In one of the many Trial of Style runs I did this weekend a salty complaint from a guy that came in 3rd place kind of stuck with me.
Basically he considered using preset item sets (tiers, dungeon sets, gladiator sets etc) as cheating.

Obviously it’s not actually cheating since the game allows it but what do you think?

I think that the Trial of Style doesn’t warrant that much frustration. Yeah, it can suck when someone wins because they don’t follow the theme and instead go with something sUp3r [email protected] ANd wEiRd, but it’s still not super hard to get all the rewards after a little bit of time. And, y’know, the rewards are also entirely cosmetic.

It’s a fun thing with fun rewards and I think people should just have fun with it and not get upset. Now, if Blizzard were to give it the revamp it totally deserves and make it feel more meaningful… Well, I still don’t think tier sets are cheating. If the community collectively decides using tier sets is unoriginal, then the majority of the voting will reflect that. Ideally, anyhow.

That’s today’s Queue(b)! Leave questions for Liz that totally aren’t about what to call this majestic Cube. So far, the community seems to be calling it “Kevin”… but I think we can do better.