Mephisto, Lord of Hatred — named for how much the enemy Heroes team will hate him

I picked up Mephisto when he joined the Nexus this week in Heroes of the Storm, and he’s pretty great! Normally, I stick to tanks and support so that I have the health to make stupid mistakes, or so that I’m further back in engagements so that I don’t get picked off when I make those mistakes. With that in mind, Mephisto feels really good to me. If he’s well supported, you can pop in and do your damage then retreat and take a breather while your skills come back and you heal up.

This sort of hit-and-run gameplay combined with the large amount of group damage that he brings to the team are going to make him great for highly aggressive teams. Lightning Nova in particular does an amazing amount of damage — it should be what you try to focus on. Take talents that get you extra spell power to boost its damage. More importantly, though, don’t forget only the edge of the ring does the damage — people right next to you are safe. Always be sure to position yourself accordingly. 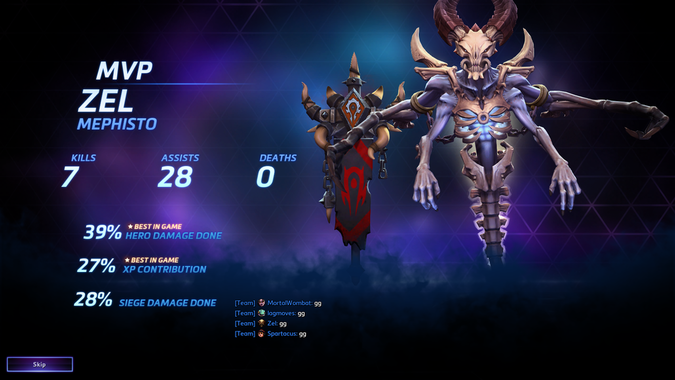 At level 7, you’re given a choice between three talents which buff your Shadow of Mephisto ability. It’s a great talent tier for giving Shade some extra utility. If you’re taking too much damage, go for the Armor. Otherwise, I like the slow because it makes it easier to land your Skulls and Nova. When you get better at using all of your spells together, level 16’s talent Lightning Reaction can add a lot of extra damage into a team fight. With it, Skull Missile doesn’t just explode once, but rather constantly while it touches Lightning Nova, making for a lot of area damage that can add up quickly.

When you hit level 10 and get your Heroic Ability, I’ve picked Consume Souls most of my games. Frankly, it’s too much fun to get a kill on the Sylvanas who thought they’d made it to safety behind their walls. Knowing the location of the rest of the enemy team can also help you get in position to surprise one of them for an easy kill. Blaze with Bunker Drop can counter this hit pretty well, so if you’re up against him, make sure it’s on cooldown first. The level-20 Storm Talent upgrade for it feels necessary — as long as you get that kill, getting a second cast of the spell can help you secure a few more, as Reddit user Valdie shows:

Maximizing your Trait value is going to make the difference between a decent Mephisto and a great one. If you want to make life difficult for Mephisto, try to be spread out so that he won’t be able to hit too many of your teammates at once. In this clip, you can see adrd from Method cast Lightning Nova three times and Shade of Mephisto twice within twenty seconds to get a triple kill — all because the enemy team was bunched up. He also mentions how mana hungry Mephisto is. It’s one of his big weaknesses, so you’re going to need to be careful about overextending when you don’t have the mana to cast anything.

Mephisto can’t handle heroes that can stay in his melee range very well. Shade will always bring him back to where he was before, and if you can dodge his spells, his auto attack damage is some of the worst in the game. Get in his face and try not to chase him too hard when he teleports away. He’ll be back. Burst damage on him is a great counter when he teleports in — he has some healing options at level 4, but they’re not ready to stand up to a whole team targeting him. 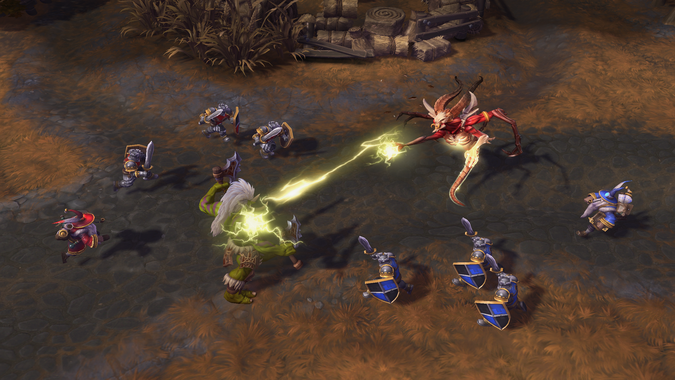 The team that hate built

Finding the right team will be important. Heroes like Ana and Auriel make for good partners, since both of them have ways to boost his spell power. This can make the difference between Consume Souls getting a kill or not. You’ll also want to work with heroes that are good at getting finishing blows. Mephisto puts out a lot of damage, but it’s pretty spread out, so it can be harder for you to get that last hit. Genji, Li-Ming, and Greymane are all solid choices that synergize well with him. All of that won’t mean much if you don’t land your hits, though. Find a front-liner like Arthas for the slows and roots he can provide, or Maiev and her abilities focused on grouping up the enemy team.

I’m really looking forward to seeing if Mephisto makes a big splash on the pro scene. He has great potential for amazing combos and flashy plays. Thankfully, we won’t have to wait too long to find out — Blizzcon is just around the corner.

Blizzard Watch is made possible by people like you.
Please consider supporting our Patreon!
Filed Under: Hots Gameplay, Mephisto, Mephisto Hots
Advertisement