The Queue: What even is a Queue? 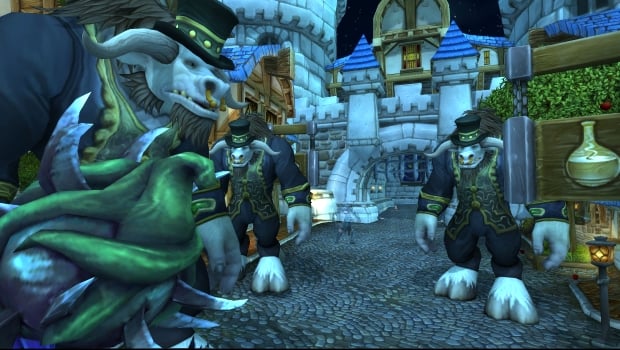 I don’t know what’s happening here, but I’m going to roll with it anyway. So let’s roll together, shall we? We shall.

One, two, Horsey’s coming for you.

I have no idea what’s happening here but this was the very first comment on yesterday’s Queue and I’m frankly terrified.

How will patch 8.1 affect my valor points?

I know this is a joke question, but I’m so frustrated by gear this expansion that I long for the return of Valor Points or some similar currency. Weapon drops are rare. Craftable items and reputation rewards are both a sort of bad luck protection against poor luck with drops, but they both take a long time to earn modest rewards. Azerite Armor the most annoying system the game has ever had: they are random drops with random abilities (which may or may not be remotely useful) that you have to level up. I am already sitting on pieces that are upgrades item level wise but downgrades because I can’t unlock any traits.

So, honestly, I think points that offered you rewards — even small rewards — from every dungeon despite how poor your luck is would be great. Even if you’re a Rogue who couldn’t get a single dagger to drop anywhere (and I know several), you could at least collect points and buy a dagger. And maybe you could buy Azerite Armor pieces and choose their traits. Or reroll their traits.

Right now the system is an exercise in RNG frustration, and even Valor Points — which I disliked when they were here — would be an improvement.

Heads up for a minor detail in today’s updates: Hydrocores (crafting material) can occasionally drop from the last bosses Heroic dungeons.

I DIDN’T KNOW THAT AND THIS IS SUCH GOOD NEWS.

If you aren’t aware, epic crafted pieces require a good number of Hydrocore to make, and you get one Hydrocore off the last boss of a Mythic dungeon. I can craft two ilevel 355 pieces, but I have to run thirty — thirty! — Mythics just to collect enough Hydrocore to make them. By the time I can craft them I’ll outgear them… but I have to craft them so I can upgrade them to 370 pieces, which I might outgear by the time I can get them. I understand they’re supposed to be difficult to get, but crafting these isn’t a practical way to gear unless you are so unlucky as to run that many Mythics and not have gotten decent gear for the slots you can craft for.

So being able to get these without running that many Mythics is great news… though a slow drop rate may still mean I’ll outgear them before I can craft them…. But the FYI is still very much appreciated.

Excited about the patch. But extremely worried about “Jaina as a raid boss”.

I bet she doesn’t die. But I still don’t like it one bit.

I’ve been worried about the idea of Jaina as a raid boss ever since they set her up as an antagonist who broke away from the Alliance and Kirin Tor to do her own thing.

However… Siege of Zuldazar is positioned to be a different kind of raid. Because they’re pushing the faction conflict thing, presumably both sides will be fighting against the other. And in that case, I think it becomes difficult for a raid boss “kill” to be an actual kill… unless Blizzard wants to wipe out a bunch of key players in each faction en masse. It feels more likely that we might defeat these bosses without killing them. Think of the Horde intro scenario, where you face Jaina in Stormwind. You defeat her in that she doesn’t wind up slaughtering you, but you do it by forcing her away from the fight rather than killing her.

My bet is that we see a raid where big lore figures are treated more like that. I am cautiously optimistic about this new style of raid.

Q4tQ: With 8.1 info being delivered to us now… what’s left for Blizzcon?

I think we had to have patch 8.1 news before BlizzCon, because otherwise we would go three months without content news. Sure, Uldir and Warfronts have been released since launch day, but if Blizzard intends to keep up the regular pace of content as they did with Legion, three months is a long time.

Okay, it’s only almost three months. But it’s still a long time, and I’m glad Blizzard is trying to keep the game from stagnating, patch-free, like it has at some points in the past.

But you’re right, because it does beg the question what’s next? It’s way too early for an expansion announcement and — unless they roll out 8.1 immediately — it even feels too early for another patch announcement. I suspect we’ll get some kind of story drop with a cinematic. Some news that’s exciting but may not involve much (or any) new game content.

I also think that this isn’t going to be a WoW BlizzCon. While we have to get something WoW related, I don’t think it will be the shining star of the event. But what will we get? That’s the real question.

So we’ve had Tides or War, now Tides of Vengeance. What’s next?

Why can’t we have tides of happiness? Why does everything have to be so miserable all the time? Bring us some cheerful tides for a change, Blizzard, come on!

Q4tLiz: Mitch made a reference in Tuesday’s queue to PUPPIES up Azeroth. Any chance that will actually happen. I wouldn’t mind expanding dog breeds beyond; corgi and flame corgi. It would be easy to engineer a dachshund from the corgi skeleton.

Azeroth is always in need of more adorable things, but I think you’ll understand that I have to vote for basset hounds. They are ridiculous creatures with ears and noses that are twice as big as necessary. Puppies, in fact, can trip over their own ears. Really. I’m not making that up.

And also they can really move when they want to. While they may look like slow, plodding creatures, they move exactly as quickly as they want to. When they don’t want to do something, they’re the most sluggish dogs you’ve ever met. When they do want to do something they are there in an instant. After dinner is always “run maniacally around the house” time for my dogs, when they zoom back and forth from the bedroom to the kitchen, chasing each other.

So I think these odd looking pups and their unexpected behavior would make a great game addition.

And that’s it for today, my friends. Thank you for joining me once again in this inexplicable journey known as the Queue. Until next week, I shall leave you to it.