The Queue: Smash it with a hammer 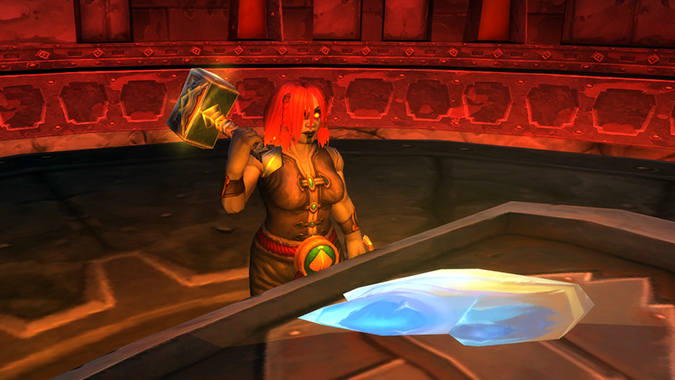 I completely forgot, in my leveling alts and grinding reputation, that I hit the requirements to unlock Dark Iron Dwarves as an Allied Race. Whoops! The situation has now been corrected, and I have a charming and not at all terrifying little ball of Monk to level at some point in the future, when I’m done with…you know, everything else I have to level. Terribly sorry Moira, didn’t mean to neglect you!

Q4tQ: If the Black City briefly shown in the Azshara video were to become a zone we go to in 8.2 or 8.3, would you prefer if it was:
Under water and full on Vashj’ir style.
Under water but it keeps you grounded to the seafloor due to “currents” or something.
An island raised from the sea.
Or something else?

I would actually prefer if it were like Vashj’ir, where you can walk/swim on the ground if you want to, and float otherwise. I know people get annoyed at the idea, but think of it this way: We can’t fly in current content right now. Vashj’ir was essentially like being able to fly without a mount, simply by leaping into the air. Don’t think of it like an underwater zone, think of it like a zone where flying is enabled.

Plus it sure would be nice to have an excuse to use all those underwater mounts again, wouldn’t it? I’d like to think so, anyway.

QFTQ (or anyone in the comments that knows): Is G’huun an actual legit fifth old god or just some kind of spawn of one of the original four old gods? I have not done Horde questing nor have I done the raid and am curious what the deal is.

Yes — technically speaking. G’huun was not created by the Void in the manner we’re accustomed to with previous Old Gods. It was a result of Titan tinkering and experiments. The Titans were trying to solve that whole messy Old God issue, and decided to experiment and figure out just what made the Old Gods tick. Unfortunately, those experiments went horribly wrong. Obviously, the creation of G’huun was a big, big mistake, which is why the Old God was imprisoned in Uldir and locked away.

Fortunately (well, sort of), G’huun isn’t anywhere near as powerful as the original Old Gods — but it still poses a pretty grave threat to the world.

Q4tQ: What do you think happened to the Garrison Followers that we didn’t see in Legion/BfA?

I imagine some of them stayed behind to help mop up Draenor, while others decided to take some sort of long, well-earned vacation in a remote location far from the troubles of Azeroth altogether. I mean, they spent a pretty substantial amount of time running errands for us. I doubt that all of them really wanted to hop right back into potentially world-ending terror immediately after the experience.

I have a lore QftQ that I have wondered about for awhile. With regards to World Souls and Titans. If I remember correctly….. some worlds have World Souls in them and some of those World Souls awoke and became what we call Titans. My question is, have we ever been told what happens to the world itself when a World Soul wakes up? Like, let’s use Azeroth as an example. If she wakes up (corrupted or not depending on where Blizz goes with the story) does she just sort of step out of the planet as a fully formed giant Titan body/energy/whatever, leaving the planet itself unharmed? Or is the planet more like an egg, cracking and hatching out a Titan, thereby destroying the planet? And on that note, follow up question: do you think Azeroth will ever wake up and if so, are we doomed?

We don’t actually know what happens when a world soul wakes up. It would be super odd if that process ended up destroying the planet altogether, considering we live on the thing and all. You’d think after all the help we’ve given the Titans and their creations that they’d maybe frown a little at the thought of Azeroth hatching and just kind of destroying us all, right? On the other hand, the Titans have been described as being living worlds, their bodies covered by mountain peaks and rivers. If that’s the case, would we continue to live on as inhabitants of not quite a planet, but a literal planetary body? It’s a good question — and we don’t have an answer for it.

Other than existing game mechanics, is there any reason that Nightborne, Velves, Highmountain, and Lightforged couldn’t have started a third faction? And then players could roll one, and choose Horde/alliance after a certain point, like Pandaren? There wasn’t really any faction basis with them, until the specific recruiting quest which Blizz shoehorned in. The BfA allied races make more sense as being one faction or the other, but the Legion ones were all neutral with both to a point.

There wasn’t really a reason for unification of these particular disparate factions. I mean, what do the Nightborne have in common with the Lightforged? Not a thing. Same goes for the Highmountain and…pretty much anyone else. These guys aren’t really interested in forming their own faction — and if we didn’t present a pretty convincing argument, they probably wouldn’t be too interested in allying with us, either. Our faction war isn’t really their faction war. They have no business in it, they have no particular investment in it. When we draw them in as allies, that’s when they start to gain that interest — we aren’t just asking for blind loyalty, we’re offering to help them, if they step up and help us out in return.

That said, there are moments where I wonder why we didn’t have a Pandaren situation for some Allied Races. Both factions helped out the Nightborne, and both factions helped out the Lightforged Draenei. It wouldn’t have been too out of place for either one to say okay, we’ll just let each individual member choose which side they’d like to ally with. At the same time, I can see why they wouldn’t want to approach it that way — the Nightborne and the Lightforged are both limited in number, lost a lot of members during the events of Legion, and are working on recovering and rebuilding after our help was given. The last thing they probably want to do is split up their numbers, particularly between two factions that are openly at war with each other right now.

Q4tQ: Do we know anything about Athair, Heart of the Forest, and Athainne, Secret Keeper of the Forest in Drustvar?

There’s a little bit of information out there, if you keep your eyes peeled for it! In Falconhurst, there’s a Besieged Villager telling stories in one of the buildings out there. One of the stories he tells is about Athair and Lord Arom. Way back in the early days of Drustvar’s history, Lord Arom was hunting for food and stumbled across an injured stag who had killed a lot of Drust. Although he was on the hunt, any creature that could fight off that many Drust and live deserved to live as well — so Arom healed his injuries and the stag bounded away. Later, Drust attacked Lord Arom in his camp, and the stag returned to help him fight them off.

Afterwards, the stag spoke to Lord Arom — much to his surprise — and thanked him for his earlier kindness. Athair said he was the Heart of the Forest, and as long as he lived, he would protect Arom and the people of Drustvar, if they came to him for aid.

There’s also a Drust Stele in Ulfar’s Den that depicts the great stag and a doe standing before a bramblebear — possibly a Drust Druid. The two creatures appear to be bestowing some kind of blessing on the bear. The implication is that Athair and Athainne are both Wild Gods. Ulfar kind of reinforces this by pointing out that the magic of Drustvar inhabits some of the animals of the land, creating powerful manifestations of nature.

Another fun fact: If you’re a Druid, Athair acts as an Innkeeper. You can set your hearthstone to him, and that includes both Alliance and Horde Druids.