The Queue: Don’t you recognize me? 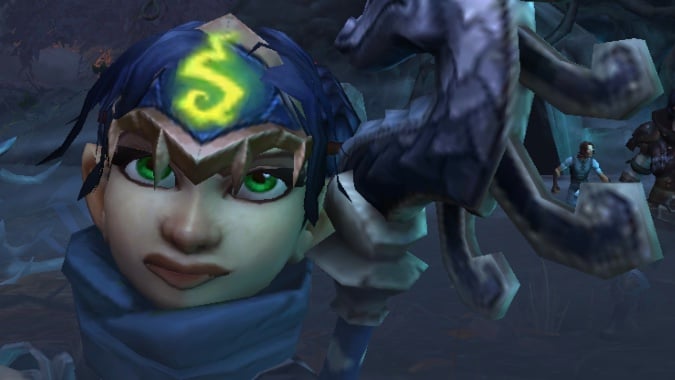 Last week I nearly pulled that on someone in my raid group, who kept telling me to read an article published on Blizzard Watch so I would understand what they were saying. I don’t think I’ve ever been more tempted to play the “do you know who I am” card. But come on: you lot do know who I am, don’ t you?

Come on and work with me here….

Aren’t you two the same person?

Ahem. If you can’t tell the difference between a Gnome and a Forsaken, I have real and serious concerns for the future of Azeroth.

Q4tQ: Do you think Blizzard will continue to expand on the story in Mechagon after 8.2, or do you think it’ll be forgotten?

I think it really depends on what we find in Mechagon. Blizzard could write it as a self-contained story that doesn’t need to be continued… and since they do have a habit of dropping story lines (coughWrathioncough), I wouldn’t be surprised if this was a one-off.

But I do live in hope that Mechagon will be more than a single storyline. (Gnomes, often forgotten, have to live in hope.) Blizzard has already spent a fair amount of time setting up Mechagon: the quests presumably leading to the zone have been in the expansion since launch. And Mechagon itself seems to be a pretty sizable amount of content, with a lost Gnome city featuring a megadungeon and arena. We’ll meet a whole new race of Gnomes. With so much that’s brand new here, Blizzard has a lot of room to tell stories, and that could mean stories that stretch beyond a single zone.

However, I know better than to guess at Blizzard’s plans. This could be a big story piece or it could be a big joke — and where Gnomes are concerned, Blizzard tends towards the latter.

Still living in hope, though.

GALDWYNN IS LOOKING TO THE FUTURE:

Q4tQ: Where should the Gnomes’ new capital city be?

Gnomes and our allies have spent a lot of time trying to retake Gnomeregan, but maybe it’s time to focus our energies elsewhere. Just think what the ingenuity of Gnomes could create if unfettered. We could have a fleet of airships roaming Azeroth, our own city in the sky that only Gnomes could create. Our future in the skies will be glorious.

Q4tQ: I’m not sure I can put this as a question as it’s more rambling than anything but it’d be kind of cool if WoW had a class tied to each race that would not be allowed on any other. Like for example a Worgen Class that had no weapons involved at all and relied on you training unarmed.

I’m not sure about a whole class, but definitely a spec. It would give races, particularly the new ones, a specific flavor that they’re losing as every race can be nearly every class. For example, if Kul Tiran Mages could pick a Tidesage spec.

I’d love the added customization, and the potential for unique playstyles based on who your character is rather than just what class you’ve chosen. But I’m sure it would be a nightmare to balance and I don’t expect this to actually happen. Still, we can dream, can’t we?

How does one gnome-ify a question originally meant for Mitch?

If an Old God took the form of a gnome, would it be best friends with Millhouse Manastorm?

Millhouse is friends with everyone except us — or anyone who offers him power, anyway (definitely not us). So of course he would also be best friends with this strange Gnome who occasionally burst out into odd chanting which Millhouse wrote off as a nervous tic. (Everyone has their things. Who is he to judge?)

At least he would assume they were best friends until he was devoured by a void-beast, as tends to happen with these things.

Liz, how have you been feeling these days?

Considering I kicked off 2017 being told I had a brain tumor (that was a bad day), I’m doing dang well. I’m not quite 100% and probably won’t be again (my eyesight is worse and I still have some head pain) but it hasn’t stopped me from doing anything and I’m not reliant on medication or anything else to get by. So you all get to enjoy me answering goofy questions for a while longer. Thanks for asking. <3

Q4tQ: What lame excuse did Mitch give for not wanting to do the Tuesday queue?

This is the exact conversation:

Liz: Well… you did say please. I should encourage this behavior.

I should have pushed harder to get something out of this deal.

And that’s all for now. Mitch claims he will be back to answer your questions tomorrow, so feel free to pander to him with your most shadowy questions. I’ll see you again next week… or whenever I have time to dive into the comments. Until then, ttfn!