The Queue: For the Horse 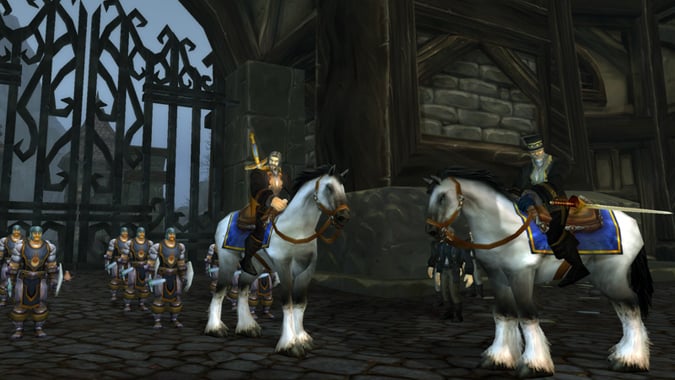 Horses. Let’s talk about horses. I’m hopeful this will be a nice, neutral topic and I won’t have to field any angry comments about this subject.

This is the Queue. Horses. Let’s talk about horses.

Q4tQ: Why is this about horses?

Because Blizzard Watch is Horse Biased.

QftHorsesQ: Who used horses best in the history of warfare? Persians? Alexander the Great? The Mongols? Muslim warriors? The Chinese?

A lot of the people you mentioned used horses very well in battle — the Persians, especially during their later Parthian period against Rome, were extremely efficient horse archers. It’s already been pointed out how good the Mongols were from horseback, and I’d definitely rate them high as light cavalry. European mounted knights were probably the best heavy cavalry ever invented, and they were so devastating in battle that they spurred the invention of black powder firearms just to make them obsolete. The Scythians were such excellent horsemen that they actually defeated a numerically superior Persian force and their Queen even supposedly filled a wineskin with blood and jammed Cyrus the Great’s head into it afterwards.

Of course, there were also quite a few cultures that used horses as chariot pulling animals — the Bronze Age of the Mediterranean saw the Egyptians, Hittites, Assyrians, and Mycenaean Greeks all use chariots in warfare. It’s hard for me to pick one and say “these guys were absolutely the best” when many groups used horses differently for different reasons. The Mongols probably conquered the most territory of any horse-focused society, while it’s hard to argue against European mounted cavalry for the most extreme development of heavy cavalry in history.

QftHorsesQ: I once read that the myth of centaurs came about when people who did not use horses for riding came across a society that did, and when they first saw them they noticed the human from the torso up, and then the horse body beneath them. Is that the true origin, or was it just made up?

Robert Graves and others have argued for that interpretation, but it’s a myth — there’s very little evidence for it one way or another. It should be pointed out that the ancient Greeks did use horses, as did their neighbors to the north and west — the Scythians, the peoples of Asia Minor, certainly by the Archaic and Classical periods the Persians and their various subject states used horses. Even during the Bronze Age horses were widespread.

The ancient Greeks even had competing myths about the centaurs — some said they were the descendants of the wicked king Ixion and a cloud named Nephele that Zeus shaped like his wife Hera to see if Ixion would try and assault Hera sexually. Others that they were the offspring of Centaurus, who was himself the child of Ixion and Nephele. But other centaur tribes were said to have other origins — the ones from Cyprus were descended from Zeus, for example, while Chiron the teacher of Achilles was a centaur descended from Zeus’ father Kronos.

By the time of Xenophon horsemanship in Greece was so well developed that Xenophon’s book on the subject, On Horsemanship, is still read and considered a good treatise on the subject. So the idea that the pre-Bronze Age Greeks were so ignorant of people who rode horses that they made up myths about them seems a bit much.

It should also be pointed out that the centaur myth is of extreme antiquity, pre-dating even written Greek, and that it stretches as far east as India, where there are myths of people transformed into horse-bodied people going back into antiquity. It’s likely that the idea of centaurs is old enough that it dates back to before the various Indo-European language groups broke up, and that the ancient language ancestor of both Greek and Vedic had myths of centaur-like people.

One theory is that the Minoans, the first society of European history, came up with the myth of the centaurs when they met the Greeks, since the ancestors of the Myceneans were a horse-riding people and the Minoans were a naval people. It’s as good a theory as any, I suppose.

Has there been anything concrete about Classic Class balancing?

I gave Vanilla a go with the idea that my Paladin could effectively perform three different roles. A month of play in, an RL friend who was currently raiding gave me the unvarnished truth (no end-game Protection or Retribution). I tabled WoW until end-game for all three specs was a viable thing.

Please rephrase your question so it’s about horses.

But in the interest of fairness, I’ll answer you. No. Class balance will be linked to the last patch before The Burning Crusade, 1.12 the Drums of War. I expect it’ll be as bug free as possible, so probably 1.12.3 which I believe was the absolutely last patch before The Burning Crusade pre-patch 2.0.1 Before the Storm. Paladins will not be viable end game tanks or DPS compared to other tanks (well, really just Warriors) or DPS.

Horses will also still be items in your bags.

Well, there’s so many possibilities — there’s Pimento, Old Blanchy, Preston and Argyle, and my personal favorite Midnight, although since he can be gained as a mount maybe don’t count him. I think I’d say Mercutio, the former mount of Marshal Windsor. He served his master well and rode away into Elwynn Forest as instructed.

Q4tQ: What’s the chance we will have a Sleipnir mount in WoW?

You have temporarily made me hopeful that we’ll get to kill Odyn in a raid. That would be nice.

Blizzard Watch is made possible by people like you.
Please consider supporting our Patreon!
Filed Under: Horses
Advertisement