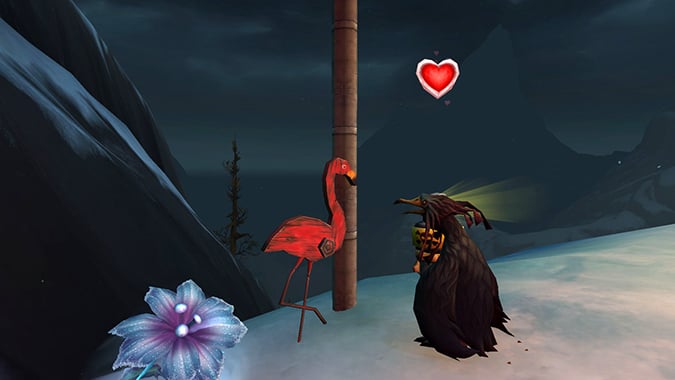 You know, I wondered why goblins had crazy flamingo cutouts and other strange oddities strewn about their campsites, but it turns out they have a purpose. That penguin isn’t going to be getting underfoot anytime soon, is it? Given my penchant for flamingo-collecting in Animal Crossing, I can’t blame the little guy for his infatuation, but I feel a little bad for what’s inevitably going to happen once we move on to another expansion. Whichever Goblin is tasked with putting that flamingo away is going to get a face-full of angry amorous penguin wrath. I sort of wish we’d get to see it.

You know what I love? Answering your questions. Let’s get to that!

Q4tQ: For those with lots of alts, how do you decide whom to level next? Professions, armor type, alternating horde-alliance, etc.?

Usually it’s just a matter of which class I want to play, but with this expansion it’s a little different. Since leveling is such a different experience on both sides, it’s a matter of which story I’d like to play through again, and then which class I’d like to play. Honestly, the two sides are so vastly different that I don’t really have a preference for one over the other! Right now though, I’m trying to level a Hunter via Island Expeditions, just to see what that experience is like. It’s not bad, but it’s getting pretty repetitive pretty quickly.

Can the Forsaken ride normal horses? Do they just go out of their way to find dead horses to rez them and mount them?

I mean…can they? Yes, technically speaking. But you also have to realize that Lordaeron was pretty much scoured of all life when the Scourge hit, so there weren’t exactly a lot of pretty ponies galloping majestically through the plague-stricken fields. Bringing the horses back to life was a matter of necessity, not so much of presenting an aesthetically unified front or what have you.

Honestly I wouldn’t be asking so much if the Forsaken could ride living horses as how the living horses feel about having undead people perched on their backs. The living aren’t exactly typically relaxed or cool with the walking dead, and I’m guessing that extends to animals as well as humanoids.

Lore QftQ: Do you think the Kaldorei Empire had an elite force of Night Warriors when they were settling their empire? I mean, yes, they had arcane mastery, but the fact that Maiev implies its been done before…do you think it was a bunch of Night Warriors that basically shattered the Trolls and established an empire?

It’s possible — the Night Elves evolved from Dark Trolls, so there may have been a group that embraced Elune’s dark side over her more customary presentation. But I think really the majority of their power came from that mastery over the arcane that the Well of Eternity granted them. Trolls are powerful creatures with powerful loa at their backs, but they’d never really dealt extensively with arcane magic at that point in history — they didn’t have any experience with it, and they didn’t know how to counter it. Over the years Trolls have developed some pretty impressive spellcasters, but back then, it wasn’t something they were expecting or familiar with.

Q4tq. Of all the Titans that ever woke up, not a single one shows any evidence of life having existed on its surface. Maybe better we put Azeroth to sleep. Forever?

I’d say Argus is probably the only one besides Azeroth that has “evidence” of life, if you want to call it that, but Argus never really woke up properly. As for the other Titans, we don’t really know what their worlds were like when they awakened — or even what the awakening process looks like. Do they hatch like an egg, and the planetary shell is just destroyed? Possibly.

I keep going back to Algalon’s speech in Ulduar: “I have seen worlds bathed in the Makers’ flames, their denizens fading without so much as a whimper. Entire planetary systems born and razed in the time that it takes your mortal hearts to beat once. Yet all throughout, my own heart devoid of emotion… of empathy. I. Have. Felt. Nothing. A million-million lives wasted. Had they all held within them your tenacity? Had they all loved life as you do?”

I’ve spent a lot of time with the assumption that it meant Azeroth was not the first world that experienced re-origination, and Algalon didn’t understand the impact of what he was doing when he fired off the signal that started the re-origination process. But it’s entirely possible he’s talking about the process of hatching a world-soul, too. When you’re watching an egg hatch, you don’t really think about whether or not there’s anything living on the shell — it’d be microscopic, insignificant in comparison to whatever life is being born.

Should we leave Azeroth sleeping? Well…yes, technically speaking. I don’t think the world is “ready” to hatch just yet. I don’t know how long that gestational process takes. But even if we are just going to let Azeroth keep sleeping, we need to make sure that she’s sleeping peacefully, and not, you know, corrupted by crazy Old God infestations and warped into something that really wouldn’t give any thought to murdering us all.

With the recent lore q and a revealing that the faction war will indeed reach it’s climax this expansion, do you think this has any bearing on the future of the faction war? Usually when something reaches it’s climax it is over shortly after. I have a feeling this climax will re-shape the factions is some major way, I’m just not sure how yet.

I’d say listening to this week’s Lore Watch is probably a really good idea, because we discuss this subject a lot during the episode. But for a shorter answer — yes. I mean, the faction war is something that’s been quietly bubbling away in the background for years and years. Saying that the faction war is going to reach some kind of climax is pretty much implying that hand in hand with that, we’ll see some kind of resolution to the whole thing. What that’s going to look like…well, we’ll have to wait and see to find out.

Q4tQ v2.0: Watching the WoW developer’s live stream made me wonder. If the Blizzard writers don’t make Sylvanas into Garrosh 2.0, does that mean she will be Illidan 2.0 – put in prison, or Illidan 3.0 – savior of Azeroth? I mean Garrosh 2.0 is silly, she’s already dead!

I think, given everything we’ve seen so far, that Sylvanas isn’t going to be a 2.0 of anything at all. I think she’s going to be her own unique experience, and I think the lore team is working pretty steadily to craft something unlike anything we’ve already played through and experienced. I could be wrong of course, but I don’t really know how this story is going to end — and I get the feeling that a pat, cut-and-dry “She dies!” “She’s redeemed!” “She saves the world!” isn’t what they’re going for here.