The Queue: Too tired for titles 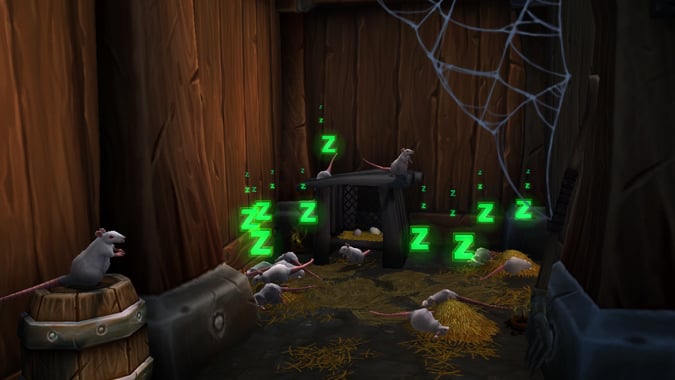 If there’s a theme this week, it’s naptime.

Q4tQ: What name do you prefer instead of Tinkers? I like Technomage.

I was honestly surprised to find that there was spirited debate around the name of a class that doesn’t actually exist yet — and, despite my fondest hopes, may never exist. And yet here we are, talking about the name of our imaginary dream class.

While watching this debate, I have to wonder… what really is in a name? In naming this class, do we imbue this class concept with meaning, with life? If we name it, do we make it real? Can we, by defining this new class as we wish, by giving it a name, bring it into existence?

But (with apologies to Kalcheus), I lean towards Rowsdowa’s suggestion of Technomancer. It says the class is more than just someone tinkering on tech (though of course they do tinker) and more than just a new Mage spec.

Any sufficiently advanced technology is indistinguishable from magic.

Q4tQ: I loved the T&E video about tinkers being the next class. I’m not a big fan of the whole steampunk thing but it could be interesting mechanics and we do need another mail class and/or rifle user class.

Here’s my question though. What happens to Tinkers, or any new class Blizz adds in a near or far future, when they hit Legion content? Legion gave SO MUCH class exclusive content. What happens to a class that wasn’t there back then? Are they given a generic green weapon with a “Good luck”? Do they have a mission table somewhere (still useful for those allied race rep)?

I guess you could bypass this by making them another Hero class starting after Legion, but then you get to another (lesser) problem. If you follow T&E’s logic, most Tinker races would be allied races. So I guess those guys just couldn’t get their Heritage armor??

If Blizzard adds a new class, they won’t be able to neglect these details. While we obviously don’t know anything for sure, this is what we could see.

Tinkers as a hero class, following Blizzard’s Death Knight design. The downside to this is that hero classes have been very tied into game lore in the past, which means the next expansion would likely have a heavy technology theme. I think that could be really interesting! While there’s tons of cool tech in Azeroth, we’ve never dug into it as more than set dressing. This has the advantages of letting players jump straight into new expansion content, which I think is what Blizzard wants. However…

Tinkers could also be a standard class. With level boosts included in each expansion, you could still jump immediately into current content if you wanted to — or Blizzard could provide an XP buff, like they did with Monks. In this case, they get a lot more flexibility in theming as Tinkers don’t necessarily need a story that completely ties into the expansion.

As you point out, there are snags when we hit Legion content, but I don’t think Legion should be considered a stumbling block — because if it is, World of Warcraft can never get a new class.. With level scaling, Blizzard could potentially nix the need to do Legion content at all, as they’ve done with earlier expansions. They would have to provide — imho — an option for players who do want Legion content… but I don’t think it would involve them getting an artifact and class hall, which would take real dev time. There’s no reason Blizzard couldn’t add weapon vendors for new players. For rep grinding, we would have world quests and it would be more like leveling through any expansion.

And as to heritage armor, I think Blizzard can just punt. If you want it on a new allied race, you can level one from scratch from another class. It’s likely we’ll have new allied race options before the next expansion, which would make it feasible… and though it’s a leveling grind, the whole concept of heritage armor is a leveling grind by design.

With the elimination of Proving Grounds, what’s a good way to practice a new role?

I’m trying to learn Resto on my Tauren Druid, but I’ve never healed much before (only a little on my Paladin back in Legion). I guess I could just run stuff and tell the group “new healer here, sorry for the deaths in advance”?

I don’t think proving grounds were ever a great way to practice a new role. The scenarios were very specific, and not always indicative of what you would encounter in the game world. Plus they could be pretty challenging, which meant you needed some experience in order to get experience.

Actually, despite my frustration with them, I think the artifact challenges in Legion were a better training tool. Some of them were extremely hard, but they forced you to use every ability in your class toolset. The problem, though, was that they were locked behind a lot of content so you could only access them late game, and the high difficulty level made them frustrating. I think if you had challenges like this with multiple difficulty levels — starting off easy to help you learn, then scaling into difficult to provide challenging content for achievements and rewards.

While that would be something neato in the future, right now nothing beats practical experience. This seems particularly true of healing, where you don’t have an entirely fixed rotation. Healing is all about triage: you watch what’s happening, evaluate the situation, and pick the most appropriate spells depending on who’s taking damage and how much damage they’re taking.

Let’s look at the Mistweaver healing rotation from Icy Veins as an example:

Keep Renewing Mist on cooldown as much as possible while in combat.
Use Soothing Mist on targets that will take constant damage.
Use Vivify on targets who need healing.
Use Enveloping Mist if your target is going to take heavy damage over 6 or 7 seconds.

When you’re healing groups, there are two more things to consider:

In a proving ground style situation, you will learn a fixed rotation to respond to the specific proving ground challenge. That can help you learn what your spells do, but it won’t teach you how to adapt the ever-changing situations you’ll see in group content. I think there’s nothing for it but experience.

I would recommend starting with LFR. Though that may seem harder than a normal dungeon, the advantage is that the life and death of the group isn’t completely in your hands. Because you have other healers for support, you can learn as you go. I find normal LFG dungeons a little harder because a lot of people speed run them, which doesn’t give you a lot of room to figure things out — but if you go in a group of people you know, who won’t zoom through the place, that can be a great learning experience.

2BE: Disney Edition: Aladdin vs Mulan

Aladdin has a lot of street savvy, but Mulan has more straight-up combat experience. Aladdin’s combat achievements include running away and getting a single lucky hit on a snake. Mulan was an actual soldier. I really don’t think the outcome of a fight is in question here — Mulan’s got this.

But also neither of them are inherently violent characters, so it seems more likely that they would wind up going out for a drink together than fight. And who knows, maybe Aladdin could con her with is extremely impressive ability to lie.

Okay, Mulan isn’t exactly straight up about who she is, either, but Aladdin spends an entire movie hiding his identity to make himself more impressive so a woman will fall in love with him. Mulan spends an entire movie hiding her identity so her father doesn’t have to go to war where he would likely be killed. Aladdin doesn’t exactly impress with his motivations here.

And that’s all today, friends. I think I’m going to go take a nap now.