The Queue: This pig is definitely not answering your questions 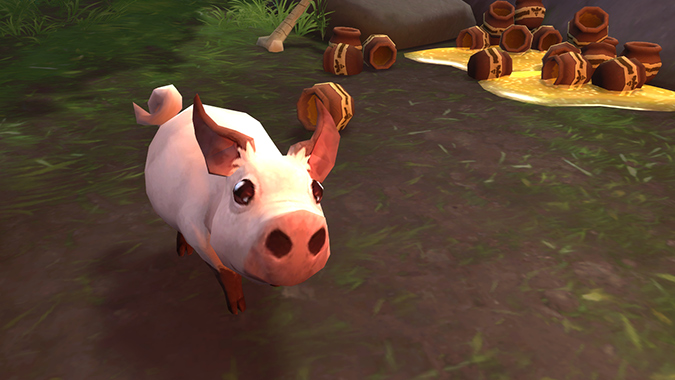 It can’t answer your questions. I mean…it’s a pig. It’s super cute, but that’s about the extent of its talents, to my knowledge. I’ll just continue answering your questions as usual — so let’s get to that, why don’t we?

Serious question: Can you mail non-BoA’s to characters on opposite factions that are yours? I have my Alliance scrubs on a different server what with the old character limit. If you can’t I see no purpose in transferring them to my main server.

Nope! The only thing you can mail across factions are Bind on Account items. Depending on what you’d like to mail, you could always do a faction and server transfer, but that’s a pricey option. The way I transfer items between Alliance and Horde is by listing them on the Auction House, then immediately purchasing them on whatever alt I want them on. However, this option requires having two separate WoW licenses. I have high level Alliance and Horde characters on two different accounts, so I fire up two instances of WoW, list on one account, and purchase on the other one. I wouldn’t really recommend this route unless you happen to already have two licenses, however — it’s another one of those pricey options.

Can I do the Rastakahn wing on my Alliance finish the little bit of post raid alliance WC and then do just the Jaina wing on my Horde and finish there?

Yes. The quest that you need to complete for each side only requires you to defeat one boss, not the entire raid. So if you’re not really interested in checking out the entire raid, you’ll want to do the second wing on your Alliance character, and the third wing on your Horde character. Completing those quests will result in a follow up quest on each side — and those quest chains will continue in patch 8.1.5.

I highly recommend completing the quests on both sides, because the story that follows is pretty interesting. But honestly, even if you’re not a raider I’d recommend going through the Battle for Dazar’alor at least once on LFR, just to see it all. It’s a great raid!

Sometimes! Although usually if they do, they’re pretty quiet about it. Developers have commented on articles before though, or tuned in for streams every now and again — I know some of them listen to the podcasts. I’m not sure if they’re watching you guys in particular, but they do pop in from time to time.

Where is Dog? I haven’t seen him since I left him in the pet shop in Dalaran.

Apparently, he’s still at the pet shop. I mean, I suppose it wouldn’t be particularly right to just drag him into the middle of a war zone, but at the same time I really miss the little guy. I’m still hoping that some day we’ll see him become a full-fledged non-combat pet that we can summon whenever we’d like.

Dog has always made me feel kind of bad, honestly — I mean, we find him just sitting out in the middle of Pandaria farmland, and he’s all by himself. It just feels like someone dumped the poor thing out there and abandoned him. So what do we do? We bring him to our farm where he’s treated like a king, and then promptly move on and leave him behind.

So he follows us to Draenor, which is great — and then we leave Draenor behind. So we give him a pebble so he can find us in Dalaran — and once again, we’re leaving the poor pooch behind. Every time he hunts us down, we’re overjoyed to see him and then we move on to the next leg of our journey, and we never bring him with us. It just makes me sad. I’d really like to have my Dog as a permanent companion, so I don’t have to leave him behind ever again, you know?

Q4tQ: Hey there! I just did the Mag’har Orc quest line to unlock them, and I have to ask. What happened to Yrel? I played Alliance during WoD, and I thought she was a pretty cool character. It was fun to see her grow like she did. But I didn’t expect her to go all extreme and do what she was doing during that quest chain. Am I missing something?

Well…yes, you’re missing something, but honestly we all are. The version of Yrel that you see in the Mag’har scenario is a Yrel that’s decades older than the one we left behind on Draenor. We don’t know what she’s lived through, or what she’s trying to do on Draenor — we just have the Mag’har’s version of events to go on. There’s a tiny glimpse of what’s going on over on the Draenei side of things via a book that drops from Exarch Orelis, but we never really get the full picture.

With that in mind, I hesitate to say Yrel is being extreme — there may be a lot more to that story than we know about. I don’t know if we’ll ever see it, as the end of the Mag’har scenario seems pretty final in terms of our ever returning to that version of Draenor. But I really hope we re-visit that storyline somewhere in the future, though — it just feels like there’s way more story left to be told over there.

Q4tQ: So with the way they’ve been giving us flying through meta-achievements across each expansion’s various patches, are you ever expecting to find a complete quest hub or other designed area that could only be reached via flight? Going from the south of Zuldazar to the west of Vol’dun, the flight path comes very close to seeing the top of the highest mountain peak, but not quite. And as you can only look up at it from one side, I can’t help imagining there’s some not-yet-discovered balcony to some long-lost troll, or sethrakk, or titan library, being up there waiting for us once we get to fly.

So what you’re proposing isn’t really what I’d call too far-fetched, although we haven’t seen anything pop up like that in a long time. Right now it seems like we’ve seen everything there is to offer in both Kul Tiras and Zandalar, but they could squeak in another quest hub somewhere high above everything, if they wanted to. At the moment though, it seems like we’re getting our new zones from a different source altogether — we’ll have a couple new places to go in patch 8.2.