The Queue: I’ve got my eye on you 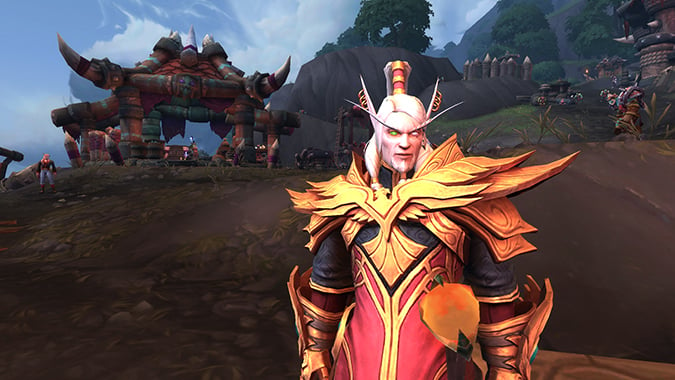 Fun story: Way back when I was working on the WoW Ultimate Visual Guide, I had a helper on Blizzard’s team of historians that I could email regarding any questions. Poor Lor’themar had gone through a variety of model changes in which he did and then didn’t have his eye, despite supposedly having lost it in the Sunwell Trilogy manga. Since I was striving for complete accuracy, this led to one of the strangest emails I’ve had to write, simply titled “Lor’themar’s amazing vanishing and reappearing eyeball,” which asked for the official status of Lor’themar’s eyeball and how it went kaput.

I’m very pleased that Lor’themar now not only has a stunning new model, but there’s absolutely no doubt left that his eye is very much busted. (I was also told that this was far from the strangest question they’d ever received, which only reinforced my interest in working for that team someday.) But that’s enough about my strange question — let’s move on to yours, shall we?

For those who met people in WoW, and then met them in real life: In person, do you call them by their real name, or their WoW name?

I think with very few exceptions it’s always been their WoW name, unless they introduced themselves differently, or their WoW name was something mildly objectionable to say in polite company. I mean, in pretty much every instance they were people I’d been talking to on Vent for years — and on Vent we’d always refer to each other by our WoW names. It was what we were used to calling each other, so we just did the same when meeting face to face, too. We’d been using those nicknames for so long that there wasn’t really any “who are you talking to” issues — everybody responded to their nicknames just as regularly as they would’ve to their real name.

Q for the Q: Does anyone know what happened to Chok’sul? He was the head ogre in Mo’Grosh Stronghold in Loch Modan before the Cataclysm. I remember pitched battles between him and my level 20 Gnome rogue at the time. Man, those corpse runs were long.

I can’t decide which was worse, the corpse run in Loch Modan, or the one in the Wetlands. Both were pretty long! As far as Chok’sul goes, he was the subject of a wanted quest in which players were tasked with bringing back his head. Given that he’s no longer in game, I’d say we finally succeeded, and he’s gone for good.

Q4 Troll druids: What determines the color of your cat/bear/turtle form? Is it the skin color? The Hair color? Completely random?
I’m actually satisfied my Zandalari has the darker skinned dinos so I’m wondering what I can and can’t change to keep this look.

Ok so I just did Seige of boralus for the first time. I play Horde and I am super confused. We seem to be fighting Lady Ashvane’s forces, but isn’t she our ally? Didn’t we like break her out of prison? Also a bunch of Boralus citizens are cheering for us to save their city, but like we’re Horde, why are we helping them by stopping Ashvane? And then next thing you know they have us fighting hozen, murlocs, and sea giants.. like what? What do we get out of that? Nathanos is in the background yelling at me to gather Azerite, but like why am I actively fighting to protect Boralus here? Also by the time the dungeon is done Boralus is like destroyed. Like Zuldazar levels of destroyed. Why was destroying the Zandalari capital a win for the alliance, but the Horde tries to help save Boralus, it still ends up destroyed, and yet the Alliance don’t seem to suffer the same way the Horde does. I am so damn confused.

Keep in mind that the Siege of Boralus takes place before we recruit Ashvane. The Horde isn’t really in there to protect Boralus, they’re in there to take advantage of the chaos. Since all the infighting is going on, it presents a good opportunity to just bust in and start grabbing all the Azerite we can get our hands on. There’s one little difference between the Horde and Alliance versions of the dungeon, and that’s the first boss — Alliance fight one of the Ashvane loyalists, Horde fight a Kul Tiran boss who’s there to stop us. Other than that, the dungeon is pretty identical.

As for the damage — well, the Horde lost a faction leader in the Battle of Dazar’alor. Boralus just had to clean things up afterward, is all. And if you’ve ever been through Boralus on Alliance side, there are sections of town that are already pretty chaotic, with NPCs that will happily attack you in the seedier parts of town. I’m guessing this isn’t the first mess the citizens of Boralus have had to clean up over the years.

Technically yes, but they usually try to space these things out by a few weeks, just to give everyone a chance to check out and explore all the new stuff that’s been introduced before slapping us with another pile of new stuff to look at. And given the size of 8.2, they could be finishing up their own internal testing and polishing before throwing it out there for us to explore. We’re looking at a lot of new stuff in 8.2, it’s much larger than the 8.1.5 patch, so I wouldn’t really be surprised if it takes a little longer to show up on the PTR. Don’t worry, we’ll see it soon enough!

QftQ: If there’s one race in World of Warcraft that seems completely incapable of changing their ways (inflexible as statues you might say, heh) it’s the mogu. Why is it so hard to think of a mogu ever becoming friendly? Why did the mogu’s personalities differ so much from other creations of the Keepers that became afflicted by the Curse of Flesh?

Well the Mogu were originally titan-forged — they were given life by Ra-den, and basically served him as shapers of the land. They served Ra-den, but they were essentially heartless creatures of stone, just kind of obediently doing whatever Ra-den tasked them to do. When the Pantheon fell and their spirits were whisked away to Azeroth, Ra-den realized what had happened to them. He extracted the last remnants of Aman’Thul’s power, stored them safely away, and then, depressed by the weight of what had happened to the Pantheon, retreated into the catacombs beneath the earth. The titan-forged were left to continue their work alone, with no one to guide them.

And then the Curse of Flesh hit. Suddenly all these titan-forged went from heartless creatures of stone to mortal beings made of flesh and bone, capable of bleeding and dying — and Ra-den still didn’t speak to them. They were left on their own, abandoned by their creator, terrified and struggling with the burden of their inexplicable mortality. That mortality didn’t just make them soft and squishy, it also opened them up to the wonderful world of emotions like pride, greed, fear, anger — things they barely comprehended, much less knew how to deal with. Combine that with sitting on a continent where the lingering, corrupted essence of Y’Shaarj was left to haunt the landscape, and you’ve got a not very pretty picture of a brutal race of beings bent on conquest.

That conquest, though — on one level, it was brutal, unforgiving, and incredibly harsh. On another, it was the Mogu attempting to do what they’d been tasked to do so long ago: Shape the land, control the land. Despite Ra-den’s absence, it’s almost as if on some level they were still trying to complete their prime directive, although the purpose of that directive had been so warped and twisted over time as to barely resemble the original intent. By now, they’ve been at it for so long that I feel like it’s really unlikely we’d ever run into a Mogu capable of things like hope, compassion, and generally being…you know, friendly.