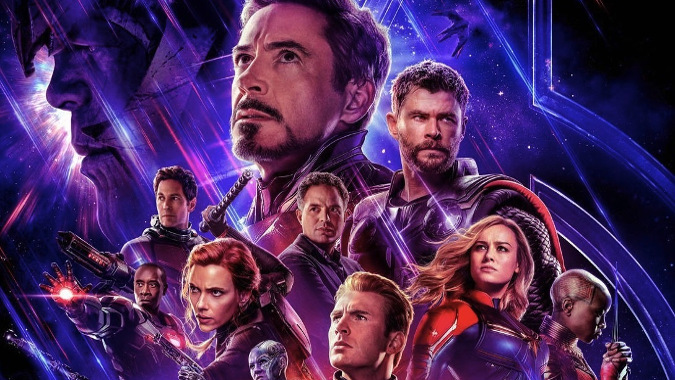 Sometimes it hits me how even when Jack Kirby didn’t create a big Marvel character, that character wouldn’t exist without him.

I mean, if you don’t know who Kirby was, I’ll try and fail to give you a brief rundown. A prolific comics artist and writer, Kirby was a restless visual innovator and a talented creator who is directly responsible for characters like Captain America, who he invented along with Joe Simon in 1940. The character debuting in March of 1941, nine months before Pearl Harbor Day and America’s entry into World War II, and Kirby would later serve in that war. Kirby would work steadily in all manner of comics for decades — westerns, romance comics, whatever genre you could name Kirby likely drew at least one story in it, he was very well known for doing sci-fi/monster comics like Stranger Tales — but today he’s likely most well known for his role in creating the Marvel universe, with his legendary run on the original Fantastic Four and other characters such as the X-Men and the Hulk. He was the artist for the original line-up of the Avengers, and it’s fair to say that without him, there wouldn’t have been a Marvel universe. 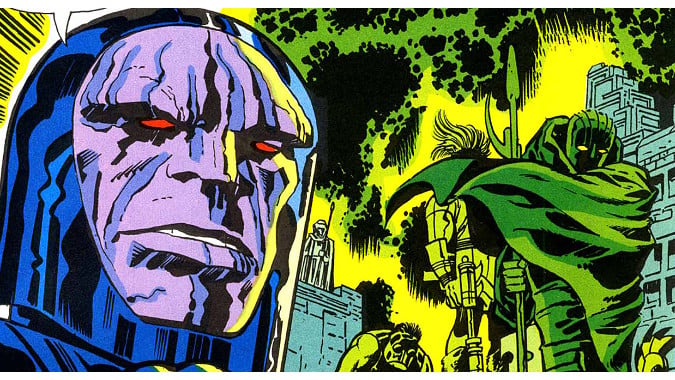 In the 1970’s a dispute over how Kirby had been treated by Marvel led him to leave and go work for DC Comics, Marvel’s biggest competitor (and a company he’d worked for many times in the years before and after WW2) where he would create his Fourth World saga, a story he didn’t really get to finish the way he wanted to but which has become so hugely important to DC’s universe and its mythos that these “New Gods”, characters he created for it — Lightray, Highfather, Big Barda, Scott Free, Orion, and most of all Darkseid, essentially the God of Fascism who seeks an anti-life equation to destroy free will and rule the universe — have returned time and again every time DC characters appear in other media. Whether or not you liked the Justice League movie, Steppenwolf and the Mother Boxes? Kirby came up with that.

And that brings me back to today, with Avengers Endgame on the horizon, and some of Kirby’s most iconic characters will be on the screen possibly for the last time for a while. But even characters Kirby didn’t create would probably not exist without him — it is impossible to imagine Marvel having ever lasted this long without the legacy of those characters Kirby made for Marvel in the 60’s. But there’s more to it than that, because the big over-arching villain of the story, Thanos? He would literally not exist if not for Jack Kirby. 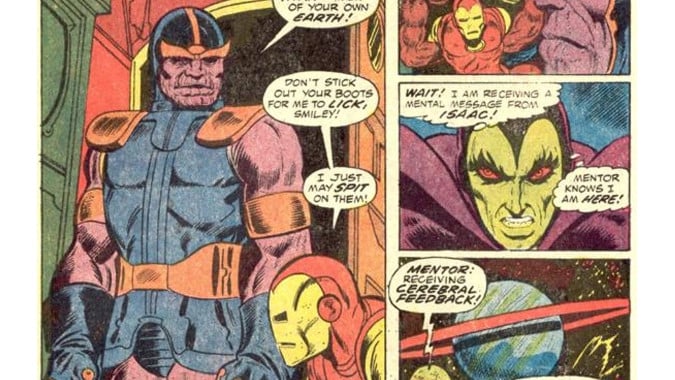 Now, let me point out that Jim Starlin, one of comics’ best writers and a talented artist as well (check out his Dreadstar if you ever get a chance) is Thanos’ creator, and I in no way dispute that or want to diminish his role. Not only did he create Thanos, he first wrote the character all the way back in his first appearance, which actually was in The Invincible Iron Man issue #55 back in 1973. That’s right — the Thanos/Iron Man match up in Infinity War is actually based on the real first appearance of Thanos in the comics as a foe for Iron Man. But even Mister Starlin doesn’t dispute the debt that Thanos owed to an earlier Kirby creation. As Starlin himself explained:

You’d think that Thanos was inspired by Darkseid, but that was not the case when I showed up. In my first Thanos drawings, if he looked like anybody, it was Metron. I had all these different gods and things I wanted to do, which became Thanos and the Titans. Roy took one look at the guy in the Metron-like chair and said: “Beef him up! If you’re going to steal one of the New Gods, at least rip off Darkseid, the really good one!”

So without Kirby’s Metron (and later, Darkseid) there wouldn’t be a Thanos, at least not as we currently have him. And this is just one of numerous characters Kirby created or inspired. Marvel’s going into its Phase 4 soon, making a whole new series of movies, and one of these movies is The Eternals. If the Eternals remind you of Kirby’s Fourth World and its cast of New Gods, it should — because The Eternals were created by Kirby after returning to Marvel, and in many ways it’s a spiritual continuation of the story he was telling in his Fourth World. And like the Fourth World, people didn’t know what to do with Kirby’s story and he was never able to finish what he was doing with this comic, either. But a lot of what Marvel has been drawing upon for its cinematic universe already, such as the Celestials (we see one of them wipe out a planet in the original Guardians of the Galaxy movie) first appeared in the pages of Kirby’s Eternals. 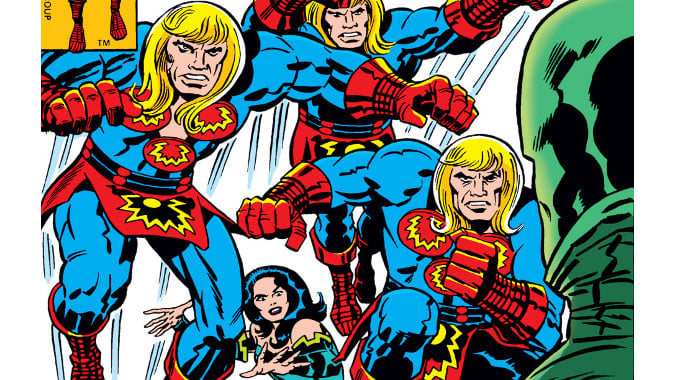 In a just universe there would have been Kirby cameos too

It’s really hard to overstate how much this multi-billion dollar franchise owes to an artist who died in 1994 still fighting with Marvel Comics over credit and royalties. Both DC and Marvel have built a lot of their multi-media efforts on the back of his work, and while he’s very well known in comics circles — I suspect if you’ve even casually read comics, you not only knew everything I just said, you’re already writing a long comment expanding on stuff I didn’t mention, talking about how I failed to really explain how much he did that wasn’t superheroes and how important an innovator he was or correcting me when I failed to note yet another character he created like, say, Ant-Man and the Wasp or the Inhumans or Marvel’s version of Thor and Asgard or we could do this all day but I have an article to finish — it’s simply astonishing to me that today his creations are everywhere and dominating some of the biggest movies on the planet and yet, he’s nowhere near the household name others have been.

He should be. I wish he’d gotten to see it, and to have gotten rewarded properly for all that work and all that inspiration he provided. There should have been boatloads of money thrown at him, endless creative freedom and yes, lots and lots of cameos in movies. And so, as you go online to buy tickets for Avengers: Endgame and get ready to watch the culmination of 11 years of Marvel movies, try and keep a memory of Jack Kirby, the man who built the foundation for that universe you love so much and who gave it so many of its characters.