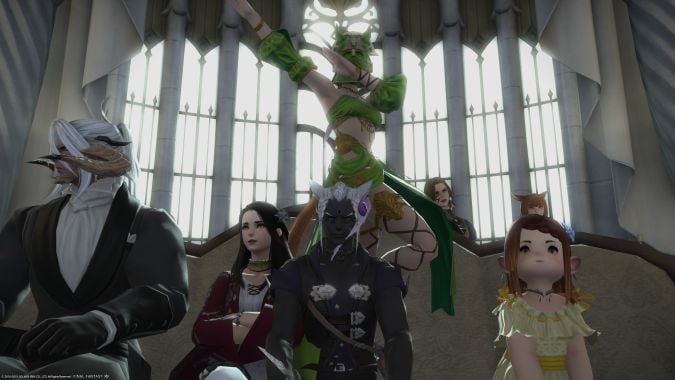 Y’know what’s fun? Sitting down to write The Queue at 3:30 in the morning only to have your internet cut out. Real fun. Anyway, it’s Tuesday Thursday and this is my time to give you all some As.

OMEDON, WE HAVE TO GO DEEPER:

Ok, I’m not saying this to call anyone out specifically, we’re all entitled to opinions and to analyze. As they say, “it’s fun to speculate.” So all of that said and out of the way:

Q4tQ: Do you think we’re overthinking some of the imagery in recent Wow cinematics? Between Derek proudmoore’s “Chekov’s gun” dagger and a million different (mis)readings of Saurfang pulling down the mask on the assassins at Thrall’s farm, I find myself listening to some of my favorite analysts and yelling out “or maybe it’s just X, and this isn’t masterpiece theatre” or similar loving but head-shaking moments.

I definitely include myself in the “overthinking” of so many elements of this expansion (I’ll see “chance for alliance elven paladin” in anything!). I can just hear Strong Bad yelling “HE’S BEHIND THE BOX! I’LL KILL YA! I’LL KILL ALL YER DOGS!” in the back of my head as we go off on various tangents, but I feel the overthinking of these images as of late has been particularly over the top.

Sometimes… he’s just behind the box.

Like you said, it is genuinely a lot of fun to speculate. And I think it’s okay if there are things in the cinematics that make viewers do so, even if they don’t come to fruition. Derek’s dagger, for example… whether that shot was intentionally used to make viewers aware of a future twist or it was put in there to make viewers THINK there would be a twist, it’s a good shot, and it makes us think.

But viewers don’t have the right to be angry if every little thing isn’t actually a clue for something deeper, and I think that’s the important distinction. Let’s use the recent cinematic with Thrall. I heard a theory that the reason we don’t see his family, the fact that they’re “not far,” and the fact that he can just up and leave like he did means they’re actually dead. It… kind of makes sense, if you think about it. And it would be a clever way to hint at something without outright saying it. But if Blizz just didn’t want to spend time or money animating more Orcs that don’t ultimately serve to tell the main story (Saurfang is bringing Thrall back), that’s fine. I don’t think fans are allowed to go, “His family should’ve been dead! Nothing else makes sense if they’re alive!”

Bottom line, I think it’s okay to speculate as long as you’re entirely cognisant of the fact that it’s just speculation for fun and that maybe, just maybe, you’re looking into things too deeply. It happens. Doesn’t mean speculation is less fun.

RED ADDRESSES THE CHANGE IN AUTHORSHIP:

2BE (for Mitch, but you’re all welcome to answer):
Tuesdays vs. Thursdays

In terms of writing The Queue? I definitely prefer Thursday. My Mondays tend to be pretty packed, whereas Wednesdays are not, which means writing these should feel a lot less exhausting from now on. Not that they’re exhausting to write, really — but when you’ve already had a long day and then remember you need to go through the entire Queue process, it wears you out.

In terms of days of the week? Thursdays also win. They’re close enough to Friday that it’s hard not to feel like knocking out my workload by EOD means I’m basically home free. Plus, I rock climb and run Mythic+ on Thursday nights (not at the same time…), which just makes them more exciting all around.

PIDIA DOES THE SAME, BUT DIFFERENTLY:

Q4Mitch: How much more will Rossi’s urge to throw you in a pool be rising?

Boring answer, but hopefully not much. I will certainly not intentionally try to diverge your attentions the way I occasionally do with Liz (not that it really works anyhow). That said, if y’all talking about whatever I’ve written or interacting with me or asking about being a squid or a kid just inadvertently makes it harder for him to pull questions… then it’ll probably go up a bit.

Q4Mitch: Is Liz the best, or the best EVER?

Q4tQ: Have you ever had a rough day at work, come home to relax with some video games, decide to play some PvP, lose every match that night, and end up feeling like your night was completely wasted and unrestful? What do you do when that happens?

Unfortunately, yes. Not necessarily PVP, but I’ve still had nights where my gaming escape/destress attempts fail horribly and I just wind up frustrated and exhausted. My go-to activities when that happens are to either do something totally mindless that I’ll still be good at (farm herbs while watching Netflix, transmog runs, or the Arcade in Overatch) or to just go to sleep. Honestly, sleep is my best method for hitting the reset button whenever my mood isn’t where I want it to be.

Let me try once again, with a shorter post and getting more to the point.

Q4TQ: which of these stories would you rather experience, in a novel or a videogame?

B) continuous story all the way, but with several small time skips (between 3 and 6 months most of the time) after every chapter

C) neither / something else

Over time, I’ve grown less fond of time skips. I mean, I wasn’t ever a fan of them exactly, but I’m starting to just generally dislike them nowadays. It seems like time skips are largely used as a means to an end, while also disrupting the status quo for a story’s characters. If you do a time skip because nothing major happens during that period of time, I think it works better than doing a time skip where a character’s disposition and worldview shift from night to day.

Time skips should serve a purpose beyond immediately jumping to a point when everything has changed. Exceptions exist — The Last of Us or Horizon Zero Dawn’s intros — but the later into a story you get, I think the more it feels like you wanted to tell a different story but didn’t have an interesting enough way to get there. Of course, it’s hard to say without specifics… but that’s generally how I feel about it.

Of your choices, I’d probably go with C and avoid time skips if at all possible. That said, if you’re skipping summer vacation like they sometimes did in The Office or Harry Potter, that’s fine. That’s not where the main action occurs anyhow. I think “after every chapter” might be a bit much though.

KALCHEUS HATES WHEN THINGS ARE PERFECTLY BALANCED, AS ALL THINGS SHOULD BE:

Q4tQ: Are there any story tropes you’re getting tired of? I honestly am getting a little tired of the “light and dark need to be in balance” trope, it seems like it’s everywhere these days.

I’m not sure I’m exactly tired of it, but I don’t always like when stories try to redeem or “save” the Big Bad. Relatedly, I don’t really like when the good guys feel such a strong sense of attachment that they lose sight of the entire mission. Note that I’m not saying I don’t want depth or sympathy to exist within characters. Let’s turn to The Avengers for a second.

I really liked how Thanos was written. He was a villain you could sympathize with and whose worldview made sense in a twisted way, but he wasn’t one the Russo brothers ever tried to turn around and make him go, “Maybe there IS another way…” He stuck to his guns, did what he said he did, and then he retired to watch the sun rise over a grateful universe.

But there are times when a bad guy is either an old friend or possessed or something and the good guys go to such great lengths to save their friend that they cause more trouble. There are like five times throughout Infinity War when the heroes could have stopped Thanos if they were willing to make the hard choice. Yes, it should be a hard choice. There’s no question there. But when the “good guys” are willing to sacrifice the safety of thousands (if not more) because their one friend is in danger… I get a little annoyed.

Sorry, y’all. If the world’s ever in great danger and I need to sacrifice one of you to save millions… it was nice knowin’ ya.

DUTRIMI I HAVE GOOD NEWS AND I HAVE… NO BAD NEWS!

How long does Blizzard keep accounts? I haven’t played since 5.1, and so far I have had zero luck trying to log into Blizz’s website.

Unless I’m mistaken, they’re kept forever. There are lots of Reddit threads of people resurrecting characters and accounts they’d thought dead for over a decade. It’s pretty cool, actually. Those folks are always super happy and nostalgic when that happens.

ROWSDOWA, ONE SIZE DOES NOT FIT ALL:

What does one have to do to develop a patreon following?

Sadly, Rowsdowa, there isn’t a one-size-fits-all method for this sort of thing. Yeah, Patreon is slightly different due to the monetary component, but gaining a social media presence on any platform takes a mix of dedication, skill, and, above all, luck.

It helps if you’re going in with a somewhat established fan base to begin with (Blizzard Watch had all y’all from WoW Insider so it wasn’t like we were building from the ground up), but if you’re starting from scratch, be willing to experiment. Definitely be able to dive into analytics and see what’s working. Is there a type of content that people glom onto, whether expected or not? Is something just plain not working? You need to be willing to cater to your audience. Sometimes, it may mean cutting back on something you enjoy doing (RIP WRUP).

You’ll also need to give people a reason to come back to your channel/service whether they subscribe or not. And the ones that do, you’ll need to make sure you can provide them with that little extra oomph of product to keep them supporting you. Along similar lines, make sure you can deliver what you’re saying you will.

There are a lot of factors going into social media followings. Luck is a big one. But there are definitely guides out there for taking advantage of tags, trending topics, analytic tools, and more. If you’re serious about this sort of thing, look into those. Study. Read up. Persevere.

That’s all for today! Do whatever you hooligans want to in the comments.