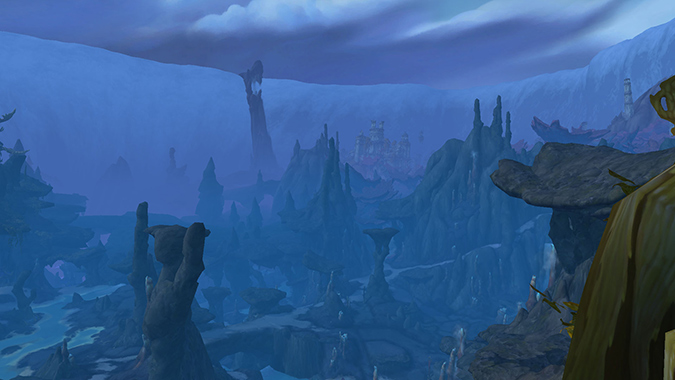 Just a day left until we’ll be wandering the watery wastelands of Nazjatar and poking around the gnomish paradise of Mechagon — are you ready? Honestly, I’m not sure what to do first — the war campaign, hitting up Nazjatar, delving into Mechagon, or just wildly playing with restriction-free transmog for the first couple of hours.

Let’s face it, it’s probably gonna be that last one, which conveniently enough leads into our first question of the day. Let’s get to it!

Q4tQ: when patch 8.2 hits, what armor will you make disappear with transmog?

I’m thinking I’m going to get rid of the chestpiece, shoulders, gloves and bracers and actually let the shirts shine for once! I have a pretty massive collection of shirts, but I’ve never really been able to utilize them in transmog beyond “This color would look good peeking through the few gaps in this piece of armor I must wear over it.” To be honest, that was one of the biggest reasons I was so happy about their decision to let us remove all that stuff if we wanted to. Sometimes my character doesn’t want to wear a good 25lbs of leather, you know?

Although I might keep the gloves, or just the bracers. Believe it or not, there’s some decent looking bracers out there that play well with the long-sleeved shirts. It’ll be fun to experiment, though!

It’s referred to as The Eternal Palace in the dungeon journal, so I’d call that the official name. I think people might swap that with Azshara’s Eternal Palace just so you know who’s in charge. Azshara certainly wouldn’t object, she’s pretty keen on seeing her name glorified in one way or another.

Humans were, yes, originally Vrykul that basically shrank due to the Curse of Flesh. But the Vrykul themselves were originally Iron Vrykul, constructs that were created by the Titans via the Forge of Wills. Basically, humanity is kind of the second round of the Curse of Flesh in action. In theory, everyone would revert back to iron if the Curse were suddenly reversed.

Mind you, that’s not really what Mechagon is all about — they aren’t trying to reverse the Curse of Flesh, they’re trying to correct what they perceive as an error. So rather than magically reversing the Curse, they’re simply replacing inferior flesh parts with robotic constructs. They would like to do that to all the Gnomes out there in the world. They would very much like to do it to all of the other races, too, regardless of what their origins happen to be. And that’s not creepy at all, no sir.

Q4TQ: if you had to pick ONE, and just ONE dungeon as your favorite dungeon ever, which one would it be? Mine would be Blackrock Depths.

After thinking over the gigantic pile of dungeons in WoW, I think I’d have to go with Dire Maul. Not the revamped version with the separate wings, the original one that was just one big sprawling pile of ruins. Back in vanilla, I really liked the history of the area — the fall of Eldre’thalas and the Highborne that lingered behind was pretty fascinating. I also liked that the dungeon had so many different areas to explore, from a visual standpoint. And there was nothing quite like fashioning an Ogre suit to try and get as much tribute as possible from the Ogres in the area.

When people ask me which of the wings is my favorite, I can’t really give that an honest answer, because they aren’t separate to me — they’re all part of one gigantic, beautiful, sprawling dungeon full of secrets and lore. Stratholme would be a close second — again, not the split version, the one that’s completely connected — just due to the hours and hours I spent farming the place for the Postmaster’s set back in Burning Crusade. Sneaking around as a solo Rogue was a fun challenge every time.

QFTQ: Do you think Blizzard will ever unlock the Flight Master’s Whistle in pre-Legion zones?

I don’t think so. Would I like them to? Absolutely — it’d make leveling a lot more convenient if you could simply whistle your way back to a Flight Master after completing a gigantic pile of quests. At the same time, I think it would trivialize a lot of the dangers of leveling out there in Azeroth. That content is already pretty easy to do — adding in the Flight Master’s Whistle would potentially make it even easier. At some point, you kind of have to look at conveniences and ask yourself if they’re really convenient, or they’re allowing players to bypass playing the game. It is a game after all, and if you’re just skipping around, you’re not actually doing much playing, you know?

QftQ: My information on water-walking mount equipment is several months old, so I’m wondering if it is still accurate: My toon that is exalted with the Anglers and who purchased the Water Strider will receive a free water-walking mount equipment in the mail, right? But then that toon has to buy more of them from the Anglers and mail them to any alts who also want to water-walk, right? And does anyone know how much gold each of those might cost?

If you at some point decide you’d like to pick the water-walking equipment back up again, you can purchase it from The Anglers for 40g. Keep in mind this is only applicable if you have the appropriate reputation with The Anglers. If you do not, then you are not left out of the water-walking fun — Blacksmiths will be able to craft Inflatable Mount Shoes that can serve the same purpose. However, the cost in materials to craft said shoes is considerably more than 40g. In other words, if you did that whole Anglers rep grind way back when, you’re still getting a good deal out of it.

QftQ: Why are there naga in Outland?

Way back at the end of the Third War, Illidan Stormrage was visited by Kil’jaeden, who wasn’t exactly happy about the Legion’s failure to take the World Tree. Illidan hadn’t exactly been the most trustworthy individual as far as the Burning Legion was concerned, either. So Kil’jaeden gave Illidan a task to avoid the Legion’s wrath and prove his loyalty — he asked Illidan to travel to the Frozen Throne and destroy it. Illidan used the Skull of Gul’dan to come up with a plan, but it wasn’t a plan he could carry out alone. He needed allies.

The Night Elves weren’t about to help him out, so he went to the next best thing — the former Highborne, now transformed into naga. He called the naga from the sea, and sure enough, they answered, and were perfectly willing to ally with him and join him in his cause. Of course Illidan didn’t realize it at the time, but the naga were willing only because the Old Gods really wanted Illidan and his hunger for power to spark another war. If Illidan got too out of hand, the naga could just, you know, cut out his heart for funsies.

Illidan had different plans, however. After saving Kael’thas and gaining his allegiance to Illidan as well, Vashj, her naga, Kael’thas and the Blood Elves leapt through a dimensional portal to Outland, where Illidan awaited them. His plan was to overthrow Magtheridon and just rule Outland himself, avoiding Azeroth — and the Burning Legion — entirely. That didn’t quite work out, because as soon as they were finished dealing with Magtheridon, Kil’jaeden showed up again to provide Illidan with a sharp reminder of his duties. The three traveled back to Azeroth, Illidan dueled Arthas, Arthas won, and Illidan was dragged back to Outland by Kael’thas and Vashj.

It’s entirely possible that over time, Vashj’s loyalties switched from the Old Gods to Illidan by this point. Either way, she seemed pretty content to stay put on Outland and try and build her own watery paradise in Zangarmarsh. But that’s how they ended up on Outland — they definitely weren’t natives to the world.