The Queue: Feeling a little crabby 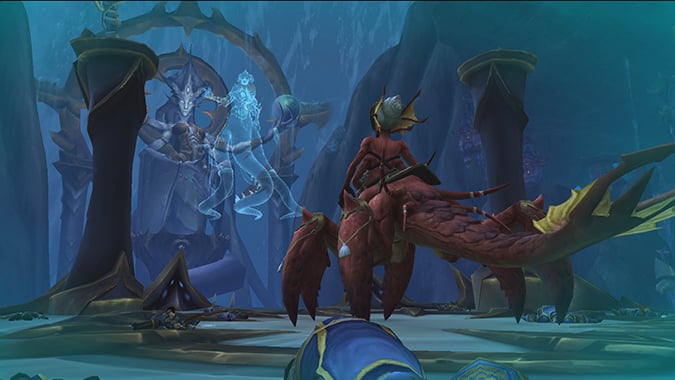 Can we just talk for a second about Lady Zharessa? I mean, out of all the really cool naga transformations, she probably got the coolest of them all. Multiple arms and lobster legs? The snake tail on your run of the mill naga is neat and everything, but I suspect being able to deliver death pinches is a lot more useful in the long run.

You know what else is useful? Questions with answers. Let’s get to those, shall we?

Q4TQ: do you see the Light vs. Void thematic being developed into something bigger in the future? Do you see our playable characters having to “pick a side”, eventually?

Do you see Blizzard going further with the idea that the Light is not 100% good, and that, maybe, there’s a “good” side to the Void as well (even though we haven’t really seen that yet)?

I don’t think it’s going to be a matter of “picking sides” so much as the realization and acceptance that the Light and the Void are two sides of the same coin. One cannot exist without the other — you can’t just wipe out the Void and expect the universe to suddenly be okay. The key, really, is balance between the two. Right now, it feels like we’re being ushered towards one side or the other — and maybe that’s because we are. We’re kind of pawns on this strange eternal chessboard, and what we believe about this cosmic battle may not actually be the case at all.

I don’t really know how far Blizzard is going to go with that idea, because it is kind of…existential and “out-there,” for a game that has a pretty solid slate of big bad guys that are obviously bad and obviously need to be taken care of. But I think it’s a really interesting concept, and if they decided to take the story down that road, I think it’d be pretty cool myself.

I mean…you can turn it off outside the main cities right now. Would they make it so you can turn it on outside the main cities? I don’t think so. It’s a pretty deliberate choice, and it’s there for good reason — if you could toggle it on anywhere, then you could theoretically toggle it on, harass some people, and then toggle it off before they had a chance to retaliate. That’s not exactly fair. It’s not a quick switch for a reason — if you’re going to engage in Warmode, it should be because you really want to play that way, not because you just want to duck in for a quick reward or a quick kill and then duck back out before anyone can react to it.

So how long after getting my sub should I expect it to be before I get the (Sylverian Dreamer) mount?

You should have it immediately — but if you don’t appear to, there’s a few places you should check. I know you already found your mount, but I figured it was worth reiterating in the main Queue, just in case there were people out there looking for it. If it doesn’t pop up on your screen immediately, or if you happen to be logged out at the time, check your mount tab when you log in. There should be a gift box there waiting for you to unwrap it and claim your lovely new steed.

If it isn’t right there in your mount tab, go take a look at the Blizzard launcher, and see if the gift tab is available in the upper-right corner. I was already subscribed with a six-month subscription, so mine was sitting on the launcher waiting for me to claim it, rather than being readily available in-game.

QftQ: I was leveling an alt thru Drustvar and the Horde assault thing came up. The one where, once it’s done, you fly up to the Horde blimp and stop them from spreading the Plague. That got me wondering, if the Horde has apothecaries that created the Plague, why doesn’t the Alliance have apothecaries working specifically to reverse engineer it and neutralize it?

They might very well have some people on that task — but if they do, we don’t know about it. I imagine it has to be a pretty complicated, not to mention highly dangerous, process. Prolonged exposure to the plague is pretty much a death warrant waiting to happen, so getting a sample of the stuff and working with it to the point that it can be reverse-engineered isn’t apt to be easy. On top of that, the Horde apothecaries almost always seem to be developing/refining the plague on their side, which means even if we found a viable way to neutralize a particular strain, by the time we put it out there, there’d be another strain to contend with.

And when you’re in the middle of war after war, fighting the Horde, fighting the Burning Legion, fighting the Old Gods, fighting mad dragons that have up and torn the world asunder — well, one wonders exactly how much time and resources there are to dedicate to that kind of research. Either way, a cure for the plague isn’t something that the average person — or average hero — is apt to have any kind of intel on. If it is being manufactured or worked on, it’s likely a top-secret project.

Q4TQ: do you have a War Resources problem on your alts (like I do now)?

Yes, but I suspect it’s because I haven’t really spent a lot of time farming on said alts. Unfortunately, the main way to gain a substantial amount of War Resources is…well, through regular gameplay. If I’m focused on my main, I don’t really have the time or energy to devote to my alts, not as much as I’d like, anyway. Usually what happens is we’ll get a new patch, I’ll spend the majority of my time on my main getting things done, and then when stuff quiets down, I’ll turn my attention to my alts. At that point, I’m trying to build up a buffer of War Resources to use when the next patch comes out, so I don’t run out entirely.

But it’s not really an easy process. I sort of wish Blizzard would introduce a better way to gain said resources on alts that maybe don’t get a ton of play. I don’t think they should make War Resources account-bound or anything, but if they had some way to purchase additional resources through an account-bound currency, that would be helpful. Maybe they’ll introduce something later in the expansion? That’s usually when they ramp up the catch-up mechanics and put everyone and their alts in high gear.

Q4tQ: When Azshara is defeated at the end of the raid and sucked into N’Zoth’s…. whatever, shouldn’t the spell she’s using to hold the water back fail and drown us all?

Technically, yes — but we took control of the Tidestone, and then we shored up the spell to keep it up and running no matter what Azshara does. I imagine that’s probably one of the first things everyone involved thought about. I mean…we all got stranded in a giant watery sinkhole, naturally we’re going to be worried about what’s going to happen should that sinkhole collapse.

And to be perfectly honest…I don’t think Azshara or N’zoth particularly want any of us dead. We represent the strongest forces both factions have to offer. If anything, we’re the kind of people they’d like not only alive, but working for their side. N’zoth had already managed to corrupt people while it was still imprisoned and locked away — out of that prison? Corruption is the sort of thing that’s probably going to run rampant. After all, there are still loads of people out there willingly walking around with N’Zoth’s eye on their heads, aren’t there?

We should…probably be concerned about that.