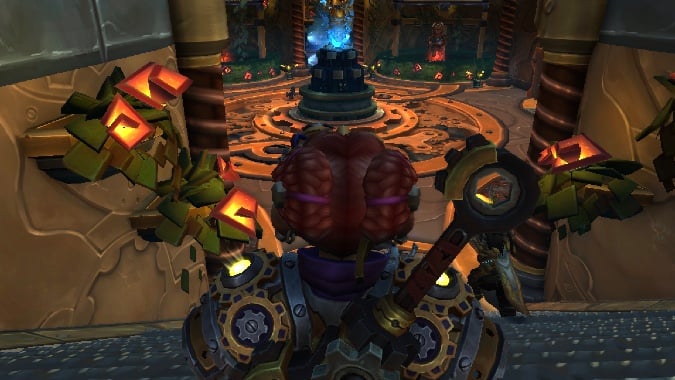 I’ll just think up a title later. No one will notice.

Well, related to my question, and the final one answered today, does anyone think that the current mentality of playing WoW almost entirely solo will be too hard for most people to overcome in Classic?

I almost always prefer to play solo (it’s an anxiety thing, I hate feeling like I might be slowing someone else down) but that’ll be pretty difficult to maintain in Classic. Heck, it was hard to maintain in BC when I first joined.

My expectation with Classic is that it’ll be something I dabble with now and then as a larf, but I have no expectations of any endgame stuff. However my game time is about to run out in a couple days and I think I’ll be taking a brief hiatus from WoW for a bit, so I won’t be jumping into Classic immediately. Might be just as well, since I have no patience to sit through login queues and I’ll probably want to wait for that to die down first.

WoW has evolved over the past 15 years, and those who never played it at the time — and those who did play it, but don’t have a 15-year attention span — will find that it’s a wholly different game from the one we play today. It’s a bit of a culture shock to jump into Classic, which looks familiar without being familiar.

But I wouldn’t say it’s impossible to solo. It can be difficult, but everything in Classic feels more difficult than it does now, and I’m not sure soloing is any worse than anything else. Back in the vanilla days, I alternated between playing a Warlock and a Holy Priest. With my Warlock, I had a Voidwalker to take hits while I just sat back and tried not to pull aggro. As a Holy Priest, leveling was slow and I had to be tremendously careful about pulling multiple mobs, because the more things that were hitting you, the more likely your spell casts were to be interrupted. And with both, I had to stop and drink a lot to regen mana — whereas modern characters rarely have mana issues at all. But soloing in ye olden days was absolutely possible, even for the least self-sufficient classes (see: Holy Priest).

I think the big problem with soloing isn’t going to be the weakness of players exploring the world on their own, but with the unforgiving tagging system. The first person to hit a mob has tagged it, and you won’t get loot or quest completion from killing it, no matter how much damage you do. (And DoT classes need to remember that DoTs did not tag until they did their first tick of damage, so you could DoT something and still lose the tag.) That makes all world content a lot more difficult, particularly if you need to fight an elite (in which case a group is your only option) or you’re grinding quest mobs in a crowded area. And sometimes even with a group you won’t always get the tag — it’s easier, but it’s not guaranteed.

All in all, I feel Classic will require a lot more patience to get through. For anyone who doesn’t like how easy it is to speed through content in retail — like the way you can just fly up to an elite and hit it once to get loot or quest completion — that will be part of the fun of it. And for others, it will be pure frustration.

But the whole point of Classic is that we don’t all enjoy the same kind of gameplay. With Classic, we have a new/old way to experience WoW — for better and for worse.

Classic question, based on answers in today’s Queue:
How effective is it to level by just ignoring quests?
Quests seem to tell you where to grind, and since the quests mean looking up where to grind, where to run to…and you can run out of quests, why not pick an area of yellow-level mobs, grind until they’re green or going gray, find another area, and grind there?

In some situations, grinding is going to be more efficient than questing. While WoW wasn’t nearly as grindy as other contemporary MMOs, it was still plenty grindy. You would often finish zones before you were high enough level to go to the next zone, in which case you had three options:

That last option, even though it’s tremendously dull, can be a real time-saver.

When you have quests, they’re still going to give you more XP than grinding — but grinding is a must-have for getting over the leveling humps where you need XP but don’t have anything else available yet.

Q4tQ: how boned are we if gnomes go full military industrial complex? Gnomish work ethic and manufacturing standards. Combined with the destructive proclivity of goblins, minus the goblin obsession with accruing gold.

I think what you really need to worry about is the Goblins and Gnomes banding together to create Azeroth’s ultimate technology. None of the other races have any respect for these diminutive gadgeteers — and one day we’ll show them. We’ll show them all.

Q4tQ: Do you think we’re going to get “Megaservers” in the nexpac? Blizz mentioned another realm merge possibly before BfA, but it never materialized.

Looking at how conservatively Blizzard is handling Classic servers — they seem to be letting realms fill up and seeing how they even out before making moves to spin up new servers — I would expect them to be slow to merge servers, too. Even though (as they’ve said about Classic) today’s realms can support far more players than the original realms, I feel they’d rather have too much server capacity (i.e. too many servers) than too little. And, honestly, why fix what isn’t broken? Unless a server has that abandoned, cobwebs on the hard drive look, why mess around?

But for my part, I’d really enjoy mega-servers. They would open up a larger pool of people to play with and guild with, and overcrowding could be alleviated with sharding or layering. It sounds great to me.

Except… why bother fixing what isn’t broken? I doubt this is on the horizon.

Question for the Queue
On a scale from 1 to 10 with 1 being nothing happens and 10 everything is on fire, how badly do you think layering will backfire on Classic? Even the lowest pop realms the Rp and Rp/Pvp are medium which is higher pop then any realm back in 2006. If the population doesn’t drop off a cliff Classic is going to explode when layering is turned off.

Frankly, I think layering is a must to prevent everything from catching on fire. All Classic servers — even the two RP realms that are still medium population — have more players on them than even the most crowded vanilla-era realm. If you just put everyone in the same place and let them run amuck, you’d likely wind up with low frame rates, lag, and crashes. I just don’t think there’s away around managing the number of players who have signed up without some sort of system to mitigate overcrowding — and right now, layering is it.

What I do wonder is how Blizzard intends to turn off layering, which they’ve said they’re doing before phase 2. Though I think everyone expects an initial rush of players that will level out, what if it doesn’t level out enough? In yesterday’s AMA, Blizzard mentioned the possibility of server transfers, but nothing is set in stone. It feels like they’re being tremendously conservative with realm availability and making promises.

I’m curious to see how it goes, but I honestly think layering can only help make launch day smoother.

Q4TQ: do you think the live game will change in any way based on how Classic WoW does?

Do you think they will be able to make retail more distinct from Classic, since people can always jump into Classic for the original experience?

Or do you think they will be paying attention to which elements of Classic people miss and enjoy, and maybe change the systems of the live game to become closer to those?

Or neither, and the live game will remain without any influence from Classic?

WoW is constantly looking forward, iterating on its game mechanics until they shine. But WoW is also not ashamed to steal: so much of the game was born of Everquest and all the other MMOs of the day, but Blizzard took those basic mechanics and polished them until they were something more, something (arguably) better.

And I don’t think WoW is above stealing from itself, either.

For the most part, I think WoW has changed for the better. I like all the quality of life changes. I like how easy it is to find a group. I’m glad I don’t need a bag space for every soul shard. The current tapping rules removed a lot of gameplay annoyances. Being able to have multiple specs and change talents allows us to change up how we play (and experiment). Transmog is perhaps the best feature Blizzard has ever added to the game.

So much has improved.

But there are still things I miss. I prefer vanilla talent trees to the modern tiered systems. I actually enjoyed downranking spells as a healer, letting you cast based on how much you needed to heal rather than today’s one-size-fits-all healing. I’ve never entirely gotten over the loss of my Holydin, whose gameplay changed so radically in Cataclysm that I no longer had any idea how to play her — I left the game entirely for a year, because my favorite playstyle vanished overnight.

There were good things, fun things in the original game that the new game has lost. As players revisit WoW’s early days — both the good and the bad — the developers will, too. And I think it’s entirely possible they’ll run into some interesting ideas that may inspire changes to the retail game.

That is all I have for you today, my friends. You are, unfortunately, left to Mitch’s clutches tomorrow, but I’ll see you again next week.