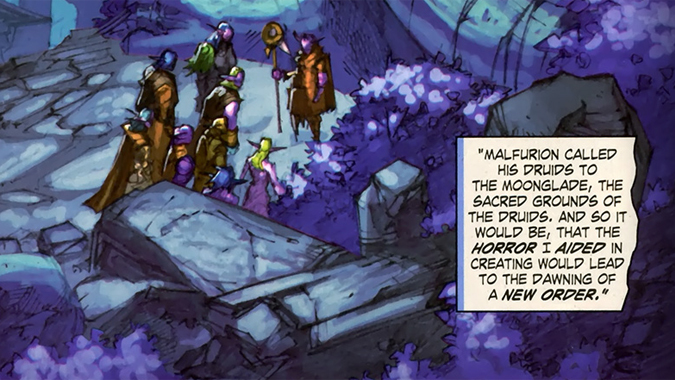 One of today’s questions reminded me to remind all of you that Curse of the Worgen was an excellent comic series that is totally worth the read — or a re-read, if you’ve read it before. Mind you, I like just about everything involving the mysterious Scythe of Elune and the Worgen, so…I suppose you could say I’m biased? I’ll take it. You know what else I took? Your questions, and then I answered them. So let’s get to that part!

QFTQ: Am I the only one that likes Nazjatar without flying? The only thing I hate is the needless timegate grinding, but the rest of it I enjoy.

Honestly, it’s gotten to the point with these expansions that by the time I get flying, I mostly forget I have flying, and continue poking around on the ground. But I will say that I really enjoy exploring Nazjatar from the ground — mind you, I play a Rogue, so stealthing around is just a way of life at this point. Because of that, it’s not nearly as much of a hassle to me as it would be to classes that can’t just sneak around stuff, and I get that.

But I’ve kind of turned into a really big fan of the whole “you don’t get flying until near the end of the expansion” thing. No, it’s not the most convenient thing in the world, but it pretty much forces me to explore, navigate my way around obstacles, and take in all that glorious scenery that’s been designed for tromping around on foot. And I find that once I do get to take to the air, I appreciate all that scenery even more because of it.

I may be a little weird though, and I won’t argue about that.

What do we think of Blizzard’s goblin and worgen preview?

I wish we could click for a closer look at the images, but beyond that — I mean, it’s not as drastic an update as past ones have been, is it? But that’s kind of to be expected. Visually speaking, both Worgen and Goblin models were miles ahead of the vanilla models when they were introduced in Cataclysm. Female Worgen were…well, they were certainly interesting, but the others weren’t exactly horrible to look at.

Really, the only thing they didn’t have was some more detailed textures, and the refined squash-and-stretch faces that were introduced with the Pandaren in Mists. So the Goblins don’t look all that different, they’re just…cleaner. Same with the Worgen, only they’ve also had some work done to their faces as well, because they simply didn’t look quite right at the onset.

I really like the remodeled features on the Worgen, and I’m looking forward to seeing both of them fully animated — that’s really the only thing I missed from the preview, to be honest. I wish they’d had some animated gifs, if not full video of expressions in motion.

Q4tQ: is there anything in WoW that causes you a lot of discomfort, almost to a physical level? In my case, there are two things:

Two things that I can think of off the top of my head — Sindragosa’s voice. This isn’t to diss the voice actress or anything, she was perfect for the role. It’s just that we spent so long trying to murder that undead monstrosity in Wrath that I grew very, very tired of hearing it.

Second, and someone already mentioned this but really just add me to the list here — you know those bears in Hillsbrad with the spider eggs on their backs? Yeah, those. I will still do the quests out there for leveling purposes, but it gives me the willies every single time I do them.

So it’s been commented here that using Treasure Chests are a good way to level for Warlords and Legion, if you have flying. What if you don’t have flying for either of those? What is an alternative?

I also recommend doing so while under the effects of rested XP. If you do not currently have any rested XP, avoid completing the bonus objective — just leave yourself with one thing left to kill/collect/fill the bar. Log out for the night, and the next time you log in to play, go finish knocking them out as quickly as possible.

Warlords really didn’t have a steep leveling curve in terms of time needed to level. Quests offer a lot of experience, and although it’s naturally easier to fly and gather treasures, you can still gather those treasures from the ground while you’re leveling. I also recommend sticking it out and completing the entirety of a zone while you’re there, rather than flying around from zone to zone and doing a few quests here, a few quests there. Quest hubs and objectives are pretty well grouped together, so you’re never going to be looking for more quests for very long.

Q4tQ: Let’s suppose for a minute we do go to the Dragon Isles in the next expansion. Do you think Blizzard could use this chance to add a D&D Style Dragon-born race? Like, that’s how we give them back their power to reproduce?

That would be…a little odd. We don’t actually have tons of information about the Dragonspawn — what little we do have is mostly tied up in the non-canon WoW RPG. In the RPG, it was suggested that the Dragonspawn weren’t actually descended from dragons at all. Instead, they were descended from humanoids that spent their lives sworn to serve the dragons. After spending generations in such close proximity to dragons, they began to assume some of their draconic qualities, and were even gifted with their dragon blood and heritage as a result.

Again, this is all stuff from the RPG, so it isn’t really canon — at least, not unless Blizzard decides to make it canon. But there are various mobs and NPCs around Azeroth that suggest it might not be an out-of-place assumption to make. Ascendants, “blessed” followers of Wyrmcults — it may be a case of dragon worship, but we have no real proof either way.

Regardless, I don’t think the Dragonspawn would have any effect one way or another on the ability for dragons to suddenly produce children again. I suspect, if it remains an important plot element, that it might be one of those things Wrathion is looking into.

Is there any in game pre-Cata lore for worgen that’s found in vanilla?

Sooooort of — although it’s really convoluted and doesn’t necessarily tie very sensibly into what we see in Cataclysm. We got the full story with the release of Gilneas and the Curse of the Worgen comic series. Until that point, we only had disparate pieces here and there to look at — little pieces of a much, much larger picture that we simply didn’t understand.

Everything surrounding Shadowfang Keep and Arugal is of course relevant information. But there’s also a really interesting quest chain in Duskwood involving a man named Jitters and the Scythe of Elune — pieces of it still remain in the post-Cataclysm game, but it’s much more fleshed out in Classic.

Additionally, there’s a quest chain in Ashenvale involving the Scythe of Elune, which also ends up in Duskwood as well. It begins with a quest called The Howling Vale, which you can pick up from Sentinel Melyria Frostshadow — I believe she’s either in the Shrine of Aessina, or in Forest Song. She relocated a few times over the years.

A lot of the information in these quests seems really nonsensical, and it’s hard to weave together. It wasn’t until the release of Curse of the Worgen that it was given something close to a coherent timeline, and explained how the Scythe traveled, and how the Worgen got to Gilneas in the first place.