The Queue: Cold and blue 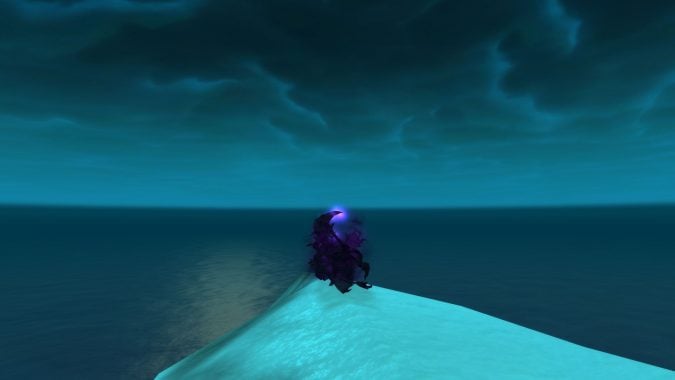 I’m exhausted in pretty much every way possible and the post-con blues are hitting me pretty hard, so I’m just gonna dive in today.

Q4tQ: Will there be a generational rift between OG* Death Knights and the new ones? Will my Pandaren DK roll her eyes and say “Ok Boomer” whenever my BElf DK tells her to “get off her graveyard”?

*Yeah yeah, I know all about Teron Gorefiend. You know what I mean.

Q4tQ: Do you think any existing NPCs will be given the DK treatment by Bolvar, or will it just be a mechanic for Allied Race/Pandaren DKs?

Stay in line, Kal. Any DKs who don’t fall in order and welcome the newbies will be punished. Although, I do think it would be a fun NPC interaction to have two DKs from different generations chatting with each other and making meta comments about how things have changed. I don’t think NPCs will be turned into DKs. Canonically, Bolvar makes new DKs in 8.3, before Sylvanas shatters his crown. I guess if N’Zoth kills an NPC or if Blizz REALLY wanted to raise someone, they could. But I’m pretty sure we got all of that sort of thing out of the way in Legion.

That’s assuming Bolvar needs the Helm of Domination to make new DKs. I think that’s the case, but Blizz could always find a way to write around it if they wanted.

SPENCER MORGAN HAS A QUESTION MORE INTENDED FOR ALL OF YOU. PLEASE WEIGH IN:

Q4tQ: Mitch is video game boss, what is his character theme?

I know what route y’all are probably gonna go for here, but here’s my answer: Isolation. I’d distort reality and make you question what you thought you knew until you felt like you had no one. I’d make you sad and scared and alone until you had no reason to keep fighting me.

Q4tQ: Now that we know that Shadowlands is part two of a two part (who knows maybe more) expansion about Sylvanas. How do you feel about an expansion with no final boss that brings the expansion to a conclusion?

I think it’s a bit of an oversimplification to say this was an expansion about Sylvanas or that the final boss didn’t bring things to a conclusion. There were a lot of different threads being woven throughout BFA, and several of them did reach their conclusion. If you went in hoping this would be an expansion to “solve” the faction conflict, the Fourth War ended. If you wanted us to deal with Old Gods, we’re likely done with that major story for a while after 8.3. If your only hope going into the expansion was that we’d kill Sylvanas, then… well, it didn’t happen. But I think you’re also missing out on a lot of good stories that were told along the way.

Now, whether or not you’re happy with how all of the above was handled is a different topic. But I’m fine with stories being carried over from one expansion to another.

RED GIVES US A NICE 2BE:

2BE: Bob from Overwatch vs. Bartender Bob from Hearthstone

BOB from Overwatch would kick Bob’s butt — but would they really need to fight? I think they’re two swell dudes who would actually just get along super well.

Q4tQ: I noticed no class, race, or even allied races were announced with Shadowlands. We had this conversation back in WoD, but I noticed so far no one seems to be lamenting it. My question is: did you see enough new features or content to get excited for it or is there anything you feel is missing from what we’ve been shown so far?

Even though I didn’t really like the idea of Tinkerers, I’m still a little disappointed that we won’t be getting a new class. They always manage to add a little extra oomph to an expansion’s hype. I don’t really care about getting a new race or not — I stick with my Forsaken and rarely play any alts, plus we’ve had a ton of Allied Races to add to our choices.

Now, did I see enough features to get excited about? Not really. But that’s largely because what I saw wasn’t anything I could experience. They’ve explained Covenants and the Tower of the Damned, and I’m really excited to see what they’re like — but those are two things that could be complete misses if executed poorly.

I’m excited for the expansion because I love new things. But it’s very much one that I’m cautiously optimistic for more so than actively excited about.

ARTHONOS GETS A QUESTION IN AT THE TOTALLY RIGHT TIME:

So Kalcheus doesn’t forget, I’ll ask his DK question for him. Count this as his one question, and don’t worry about answering any of his other questions:

Q4tQ: If Donkey Kong were to play WoW, would he roll a DK?

HUSSKIES GOT LUCKY WITH THE ORDER IN WHICH I CHOSE QUESTIONS:

Arthonos is just kidding, I know what the real DK question is.

Q4TQ: If Vulpera DKs are going to be a thing, can we expect undead Alpaca mounts in the near future?

DUTRIMI GIVES A LOT OF CREDIT TO BLIZZ:

Do you think Blizzard had this story in mind when they wrote the Sylvanas being raised by the Val’Kyr back in Cata?

Even though they’ve technically said that her deal with the Jailor started in Edge of Night, I don’t think they had this specific story in mind until Legion. That’s when we really started getting breadcrumbs to this. That’s just a guess, though. I think Blizzard has an idea pretty far in advance of what they might do with a story but also leaves several options open.

Like I said, that’s all guesswork, though. You’d have to ask someone pretty high up at Blizz to confirm when this whole idea first came to be.