If you could add a holiday to World of Warcraft, what would it be? 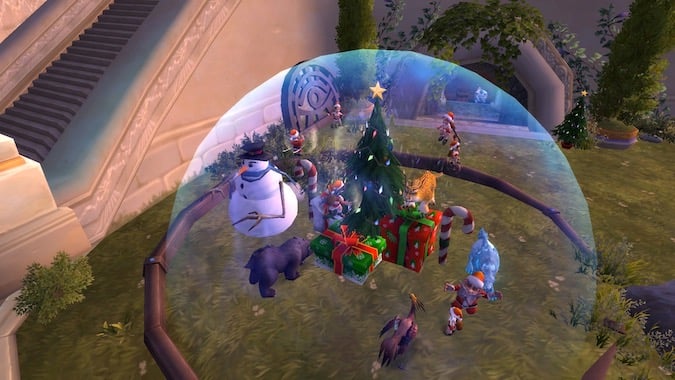 We’re coming to the end of two months of non-stop “holiday magic.” It started with the 15th Anniversary events and ends with everything going away January 7. During this time, we’ve had the Moonkin Festival and Pilgrim’s Bounty. Upcoming are the fireworks on New Year’s Eve and the end of Winter Veil. There have been a lot of holiday or festival-related days in the last two months. I’m kind of ready for there not to be something on the calendar.

I don’t remember how we got to talking about holidays in guild chat, but I asked, “If you could design a holiday, or have a holiday based on something you do, what would it be?” One of my guild members jumped in immediately: “It would be a hide-and-seek holiday!” she enthused. See, she runs a monthly special event which has nothing to do with whatever current content is but which is guaranteed to be laughter invoking and a great way to burn off frustrations. Her best-attended events are some version of hide and seek.

She said the holiday would have a rotating group of NPCs you have to find. Some would be easy — such as Nutral — and some would be difficult — such as Elder Torntusk. On this holiday, the NPCs would be neutral to opposing factions, but getting to them won’t be. So, while Craggle Wobbletop would say, “Hi there, Tauren! You found me!” the Stormwind guards aren’t going to be happy you’re in town. She’d also like an achievement for finding the selected NPCs each year, with an overall meta achievement at the end of, say, three years.

I have to admit — because I adore achievements — this would be right up my alley. I considered what kind of holiday I’d like, and I came up with one I like to call “You Can’t Get There From Here.” For this holiday, you have to get a ride to all the flight paths currently available. I confess that I usually don’t fly myself places. If I can take a flight from point A to point B or close by point B, I’m going to do that. I use the time I’m in the air to do something else, like find that pen the cat knocked off the desk because it’s currently the only pen that works — you know — important stuff.

What say you? If you could design a holiday/festival based on something you do in-game or a hobby of yours in real life, what would you create? Would you give achievements? If so, what would they be? If you want me, I’ll be tossing coinage at Bruuk Barleybeard for the “Drink a Dwarf Under the Table” festival.

Blizzard Watch is made possible by people like you.
Please consider supporting our Patreon!
Filed Under: Achievements, Breakfast Topic, Festival, Holiday
Advertisement