The Queue: What even is time? 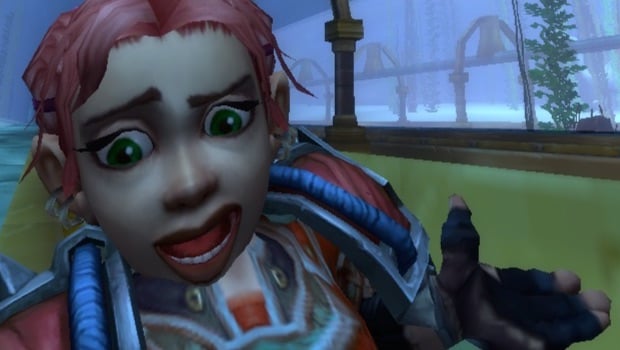 I have lost all sense of time since the holiday season started. Is it still November or has December finally arrived? Are we still in the middle of the December holidays or is it already January? Or February? Maybe March?

What even is time anymore?

Ugh, I don’t know. Let’s skip ahead to the questions.

Q4tQ: Did you pre-order Shadowlands? Did you get the Heroic or Epic? Have you used the 120 boost if you did? If you used the boost, how did you like the instant 390 gear?

I usually pre-order, but I haven’t felt the need to grab Shadowlands. I can’t think of what I’d use the level boost on, and I just can’t see why I need spend the money now.  It’s the holidays and it feels like I have better things to spend the cash on.

I used to pre-order every expansion, but I’m just not seeing a compelling reason to buy Shadowlands yet.

I hope tomorrow is a Rossi queue:
Q4tQ: Is a dinosaur warrior riding a dinosaur peak dinosaur?

Second, that is definitely peak dinosaur.

Q4tQ Are you ok with the 8.3 “catchup” gear matching the LFR version of the tier gear?

Tier gear used to feel super special, but these days every tier seems to be a recolor of every other tier. Because the tiers themselves don’t feel terribly special, it doesn’t feel bad that they’re adding yet another recolored set.

I hate when you get a bad partner in the “cooperative” brawls. No pack for me just because my idiot “partner” decided to go AFK when he had lethal for the pinata on board. Now I have to queue again.

I’ve actually had really good luck with this brawl, which I credit to having pop-up explanations for each phase of the fight. It’s certainly better than the many brawls with no explanation where you’re supposed to be working together, but your opponent just attacks you. Some brawls are so poorly explained that it’s a wonder anyone figures them out, but this one is pretty aggressive with the explanations.

As the week goes by, everyone seems to start catching on, so sometimes these co-op brawls are better later in the week. So keep trying. Or maybe ask if a Queuebuddy will play with you.

Q4tQ – do you see a tension between “The new changes makes leveling 60-70% faster” vs. “The stories in each expansion deserve better”? If you do, what do you think the best balance is between time to level 1-50 and being able to experience the stories well?

I have to admit that I’m a bit conflicted about this, but I tend to be on the side of taking my time and experiencing the story. If it’s just hitting buttons, I just leave it and play a more engaging character or game.

That said, there were points when leveling my monk where the questing just got old and I hit up a random dungeon or battleground to progress, skipping some story altogether.

On its own, the pieces don’t quite fit together. But if you work through the logic of it, I think it will play out well.

In Shadowlands, you’re being sent to play through one particular expansion. Instead of trying to get 120 levels across every part of the game — which means you jump around a lot and never finish a storyline — you will be getting 50 levels (ish) in a single expansion, and the last ten in the latest expansion. By shoving you into a single narrative rather than forcing you to jump around as you outlevel content, you’ll have the chance to finish things — even though you have fewer levels to grind and less experience to get.

As long as they balance it out so that playing through one expansion equates to hitting (mostly) max level, I think it will feel just right.

And that is all for now, my friends. Tune in on Monday when you shall meet our mystery Queue writer. Please leave them plenty of exciting questions so they can get their run of the Queue off to a good start.