The Queue: Home is where your hearth is 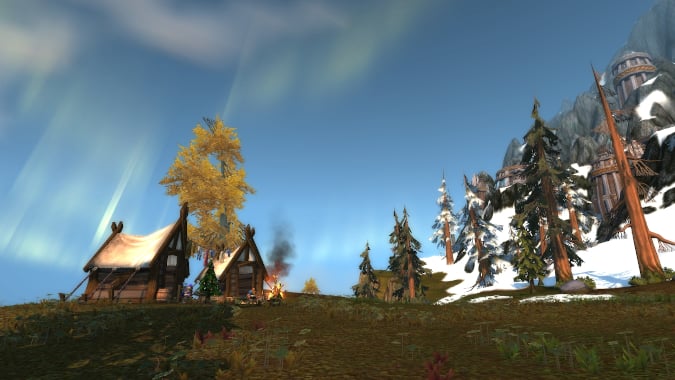 This question has come up from time to time, and I finally went to take a screenshot to show you where “my” house is in WoW. What better way to watch the passing of the year than from the comfort of your own home? Smell ya later, 2019.

This is the Queue, where you ask us questions and we provide the answers. Hopefully.

B. WOLFE KICKED THIS WHOLE THING OFF

Where’s your home in WoW? What is your default expansion?

If I were to pick an actual house for nearly all my characters, I’d pick these little house-tents in the taiga in Grizzly Hills. My Mistweaver Gnome would be taken with the borealis and serenity of the place, and my Blood Elf Hunter would enjoy talking shop with the local trappers while still having room to roam. I’d imagine my upcoming Vulpera something-or-other — y’all knew I was going to roll one, but I’m not sure which class yet — being able to just convert the boards into a rolling cart whenever she wanted to relocate.

Something about this location always struck me as very cozy. Canvas tents on the edge of snow probably aren’t very insulated, but with a roaring fire just outside I could definitely make do. This time of year I always miss snow.

Q4TQ: How Alt friendly do you think WoW should be?

To me it feels like it was somewhere around MoP that Alts even became that much of thing. Sure players had Alts but it was a big investment of time and resources to have them. Nowadays players have armies of Alts.

Back in WoD I created a groups of Alts that made me millions in gold between WoD and Legion. I think Blizzard hoped that players like me would spend our gold on game time and then they could make money from selling gold to other players. Sorry Blizzard I still have all my gold and more. :D

But back to my question, how Alt friendly do you think WoW should be? This seems like a real problem for Blizzard’s game design going forward. Because anytime that Blizzard creates new content, that requires players to put in any amount of effort for rewards, there’s now going to be a part of of the player bases that’s not happy and wants to change the basic game design of a MMORPG.

There’s a kind of odd trend here worth exploring. I noticed a lot more people maintaining alts in a casual way back when professions mattered. It was more of a pain to get your alt up and running, but even having one extra character to farm leather if your main was a blacksmith and miner really helped your cash flow. However, it seemed like most players stuck to just one or two, and you weren’t compelled to grind geegaws or rep to make your alts “second mains” unless you really wanted to. After the cash bonanza that was the Warlords Garrison — am I the only one who’s still trying to sell off a couple reagent banks worth of True Iron Ore? — alts seemed like less of a necessity to maintain, but even with level boosts for cash, the rep grind alone ensured that the startup time was just as intensive as ever, if not more so.

I wonder whether the game is less friendly to alts now per se, or if people just have all these characters kicking around they can’t stand to leave behind.

And of course, this all depends on your focus. In both Battle for Azeroth and Legion if you wanted to collect all the battle pets, it was suddenly very necessary to maintain an alt on both Horde and Alliance to a relatively high level. Legion required a whole lot of PVP with different rewards per faction plus a completely maxed out Death Knight, while Battle for Azeroth made you grind faction rep in order to unlock pets you could buy with Charms, plus a few special pets like Bumbles with faction-specific unlocks. Despite maintaining bifactional alts I gave up on Catching Them All in Legion, but I know there’s a tiny subset of pet collectors who just won’t say die. I’m not sure there is a gate that would dissuade some of these people.

There will always be people grinding alts, and I don’t think that will ever really change. Account-wide rep would be nice though.

Though Indie games in general exploded this decade, there are two genres that really made their mark. They’re diametrically opposed to each other and before I go much further I have to write aS a GaMeR in sarcasm font, because those two genres are walking simulators and mobile ARGs.

Mobile ARGs broadened the world around us. They brought real people together in real places. In 2013 Ingress was fairly underground as a concept, but it laid the foundation — literally, they were developed by the same company using the same maps — for the huge hit that was Pokemon Go. One thing that always hits me in the feels is when older kids are nice to younger kids for no real reason. Pokemon Go saw tons of people helping each other grab their favorites, and even heated back and forth gym battles never truly got nasty. It was a leap forward in tech, and playing games in real life was a way to make game friends you could actually like, go hang out with whenever. Also, fresh air is fun.

Stanley Parable and Gone Home hit the internet early in the decade, and they both toyed with the notion of what a video game can be. The standouts in the genre — Firewatch, Oxenfree, What Remains of Edith Finch, Kentucky Route Zero — all have stories which could only be told through the interactivity a video game offers, as opposed to a movie or TV. These games tend to be deeply touching, because playing as a character through their trials is a cheat code for developing empathy, and the stories tend to explore themes and characters more deeply than other genres. The symbols in Edith Finch were worth the price of entry by themselves, let alone the entire rest of the narrative.

Blizzard Watch is made possible by people like you.
Please consider supporting our Patreon!
Filed Under: Indie Games
Advertisement