Squeakers the Trickster, WoW’s new flying rat mount, is yours with a six month subscription (and he’ll melt your heart with cute) 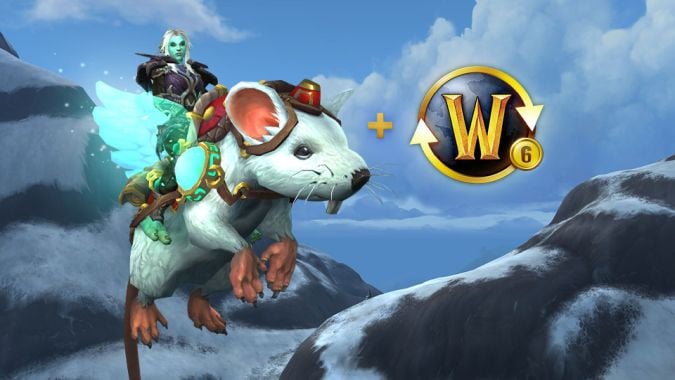 Okay, y’all. This is the first time I have ever been upset that I’m paid up until next year, because Squeakers the Trickster is just mind-meltingly cute. This new mount, available for you lucky World of Warcraft players who sign up for a six month subscription, is clearly a nod to the Year of the Rat and he is, as is touted on the official site, Azeroth’s first flying rat mount.

Look, I know how the internet works. I know about cynicism and despair and how we always look for the worst in any decision, and often that’s a perfectly viable viewpoint. But seriously, this is an adorable flying rat mount and I don’t want to hear anything bad about him, okay? Yes, Blizzard is making money off of this. That’s what they do. They’re a company that sells us video games and the accoutrements that come along with them.

And this is just perfect.

It’s a delightful, perfect flying rat mount that makes me briefly raise my bleary head from the sea of woes and anxieties that beset me and bring a smile to these hoary old features of mine.

Just look at his little teeth. I defy you to watch this announcement trailer and not tell me he’s just the best little flying guy.


The part where a mini-whirlwind lifts him into the air so he can start flying, like a rodent version of Lynda Carter (ask your parents if you’re too young to get it) and the way he drops his head when he lands, just a little Okay, that happened bow that sells the whole thing. It’s honestly magical. And if I can be swayed by this mount’s raw cuteness, literally no one is safe.

You’ve got until February 23 to get Squeakers via a six month subscription. After that, you’ll still be able to buy him, so if you’re like me you may just have to pony up the cash for this almost oppressively cute mount.