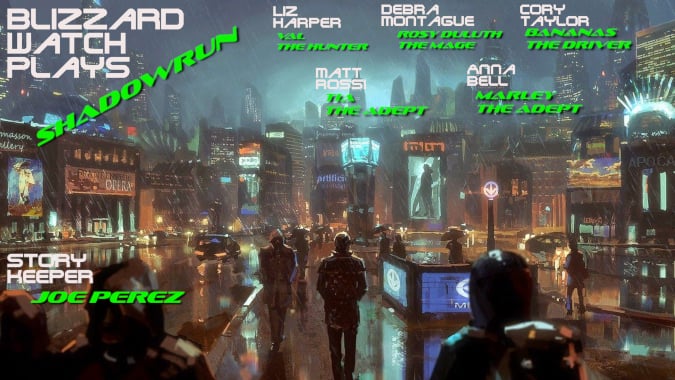 This week our tabletop gaming crew took a break from D&D to try something completely new…. D&D with guns! The adventuring group took the the mean streets of Nickel City for a cyberpunk adventure set into the far future of 2088. It was set in the universe of Shadowrun, where magic is just as common as technology.

This is the crew we gathered to tackle a mysterious mission from the mob:

It was a fun game, and you should go give it a listen before you read any further, so you don’t have any spoilers, because we’re going into a game synopsis from here.

But if you just want the story beats, we’ve got you covered.

Our story began when the crew was offered a job from their main contact, Vinnie the Flower. Vinnie is a Minotaur who works for the mob as one of their chief handlers for runners, and he had an interesting assignment: an ancient vault had been uncovered in the city during some construction efforts, and someone had to check it out. The job was simple. The crew had to go into the vault, discover what there was to discover, and get out with a full report.

The party got to the site to find it mostly barren outside, with only a huge vault door as evidence of anything unusual. But inside was another story: compared to the modern streets of Nickel City, the vault looked like office space from the 1970’s, complete with shag carpeting. The deeper our crew delved into the vault, the stranger things got, as they stumbled into a trove of weaponry that combined magic and high technology, Old God-corrupted janitors, genetically engineered birds with human hands for feet, cryogenically frozen genetic experiments, and a necromantic dragon… which they woke up.

But all’s well that ends well: they befriended the dragon by freeing it, snagged some cool gear, and raked in a lot of cash from Vinnie. That’s just another day in Nickel City.

And that was just the rough highlights of our adventure! You should definitely give it a listen, and if the world sounds interesting, we have a rundown on just what Shadowrun is for anyone who wants to play around in it. We played a version of Shadowrun called The Sprawl, which uses Powered by the Apocalypse rules. If you want to give your own game a try, you can pick up The Sprawl playbook as well as the Touched and Touched Prime supplements, all of which came together for our version of Nickel City.

This one-shot game was made possible by supporter Sixthousand, who donated to push us up to our next Patreon tier for the month of April. That $6,000 tier lets us produce more D&D content and podcasts, so if you enjoyed our weekly tabletop games in April, please pitch in your support so we can do more of it every month.

In the meantime, we’ll be back next week with another episode of Rossi’s D&D Spectacular, and at the end of the month I’ll be hosting a weird west themed one-shot. Catch us on Twitch every Saturday in April at 2:30pm CDT for more gaming!

Blizzard Watch is made possible by people like you.
Please consider supporting our Patreon!
Filed Under: Cyberpunk, Shadowrun, Tabletop, The Sprawl
Advertisement