The Queue is as the Queue does 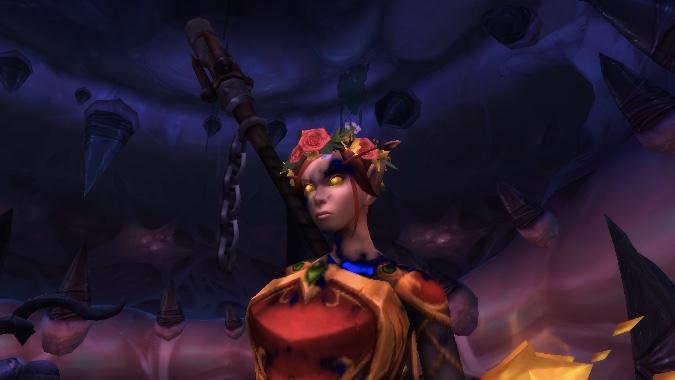 Revendreth is live on the Alpha, right? Is it the next zone you go to after Bastion, or did they skip part of the questing to send you there?

Revendreth just went live on the alpha, but it is (as has been pointed out in the comments) not the next zone sequentially. To play through Revendreth, testers need to create new, level 57 pre-mades. Bastion is designed to take you maybe to around 53, so it would be a real challenge to get high enough for Revendreth without the intermediary zones.

Cory did a gallery of the place, though it’s nowhere near as cute as his Bastion gallery.

Q4tQ in the upcoming Shadowlands expansion, will Torghast Tower be mandatory content to run.

We know that Torghast will be a source of Legendary crafting materials, which is certainly going to make it highly desirable. However, that doesn’t mean it’s necessary. We don’t know if there will be other sources of these materials or whether they can be bought and sold on the auction house.

Like Horrific Visions, I expect Torghast will be very important to advancement… but like Horrific Visions, it may not be strictly mandatory. While you need a cloak to be able to kill N’Zoth, you technically only need a level 1 cloak, so you could conceivably stop after that initial quest chain and be done with it.

Sure, you’re missing out on a lot of item levels and buffs by not running as many Visions as possible, but you don’t have to do it, either — and my guess is that Torghast will be exactly the same.

Would you suggest I start pursuing healing Mythic + on my Paladin, or should I instead level my Shaman or Monk and heal on them?

If you want to go by the numbers, Paladins are performing better than Monks and Shaman in M+. Holydins are strong across the board , with excellent Glimmer healing from throwing holy shock around, great of cooldowns, and unmatched survivability. Honestly, nothing in the game even holds a candle to divine shield.

A Holydin’s place is in the middle of battle, where they can easily jump between smiting their enemies and healing their allies. (I highly recommend one of the Legion Artifact transmogs for maximum smashing.) And in M+, it shouldn’t be difficult to keep Glimmer on the whole party to maintain steady AOE healing while you keep smashing.

As everyone reading this probably knows, I’ve played a Mistweaver for quite a while now — and I have something of a love/hate relationship with the spec. I feel like the design is haphazard, full of contradictory talents and abilities that just don’t synergize. Blizzard’s recent announcement that they were going to nerf Rising Mist — a DPS/healing talent that they only just buffed to the point it was practical to use — immediately followed by the announcement that they weren’t going to nerf Rising Mist suggests that Blizzard doesn’t have a plan for the class.

But I do find Mistweavers’ particular style fun — it’s all about rolling HOTs and letting your primary heal splash to your HOT targets. With Rising Mist, you can kick things in the face to extend your HOTs and immediately heal all players wit. It’s a particularly strong build in smaller group content because it’s extremely easy to keep HOTs running on everyone for — much like Holydins — sustained sustained group healing. Monks are also extremely mobile, which is great for maintaining DPS uptime and beating an M+ timer.

Shaman I’m not sure about. They’re doing extremely well in raids right now, but they’re below average in M+ content. Though I don’t have the play experience to say with certainty, totems and fixed-location AOE like healing rain both favor groups that are standing still — not always a possibility in M+.

All of that said, the difference between playing the best healing class and the worst healing class isn’t that much for the average player. Unless you’re aiming for the highest, highest-end content, just do your best playing whatever you think is the most fun. Follow your joy.

QftQ: are there any rumors about a Blizzard store charity pet for the Covid-19 pandemic? On the one hand, I’m kind of surprised there hasn’t been one yet, Blizzard usually comes out with one fairly quick for big catastrophes or trauma. On the other hand, maybe it’s too big of a thing. How do you decide what and where the money goes for something that is affecting the whole world?

If there were to be a charity pet, obviously Blizzard wouldn’t do anything plague-y, it’s not appropriate. Instead I’d think they’d go adorable. So, if there is one, what should it be? A fluffy alpaca in a nurse hat?

I think the snag here is that these things have a lead time. Blizzard started selling charity pets in 2009, and since then almost all of them have been released in November or December. The only pets that don’t fit that release schedule — the Cenarion Hatchling in May 2011 and Shadow in September 2017 — were both released specifically to support American Red Cross disaster relief efforts, so it seems likely Blizzard would do a charity pet for the current crisis.

But everyone at Blizzard is in the middle of the same shakeup all of us are — trying to figure out how to balance life and work when they’re stuck at home all day, and struggling with all of the technical and organizational hurdles that working remotely entail. It’s a lot of adjustment, and no one anywhere is managing maximum productivity in the midst of this chaos. If we’re going to get a pet, it may take some time.

Also, it should be a chubby unicorn. I have spoken.

So question for the queue and everyone:
If you had to vote for “best cutscene in BfA”, there’d be a *lot* to choose from of course. Which one would you pick? I like a lot of them, but far, faaar above all the others is the one with Anduin punching Wrathion. I’m all for non-violence, but by the spirits, I’ve been wanting to do this since the end of Mists. Thanks, Anduin.

There were so many fantastic cinematics this expansion, but my favorite is Talanji and Rastakhan in the Battle of Dazar’alor. It was a very emotional moment, and you can’t help but feel for Talanji… and to want to take revenge for her (even if you’re an Alliance player jumping into the Horde side of the story).

It also hit on the ridiculous futility of all of this fighting — of the whole “war” in “Warcraft.” We are constantly killing mothers and fathers, sons and daughters, brothers and sisters, leaving behind heartbreak and a desire for vengeance. Over the course of the game we’ve had a lot of chances to be heroes… but we’ve also burned a lot of things to the ground and never tried to repair them.

Remember how we left Pandaria in a ruin… and only went back so we could fight off an Old God who came to power because we kind of sort of accidentally helped set him free?

If not for N’Zoth, I’m sure we would still be happily ignoring all the harm we did in Pandaria. And considering that we’ve brought ruin to the Vale of Eternal Blossoms a second time now, I think the Pandaran might have preferred if we were ignoring them.

That cinematic really catalyzed the futility of it for me. But in a good way.

Q4tQ: what would you rate these dogs?

They demonstrate near perfect language skills, here, which is extremely impressive. However, I have to point out that how often they have to repeat themselves so many times does suggest they aren’t quite as persuasive as they ought to be in order to ensure efficient household management.

So I’m afraid I have to give them a 12/10. Keep trying, doggos. With hard work, you’ll eventually gain perfect control over your pet humans.

That is all for now my friends. Please stay safe out there and enjoy another weekend of binging Netflix and leveling alts. Have a happy Friday, y’all.