The Queue: Friday all over again 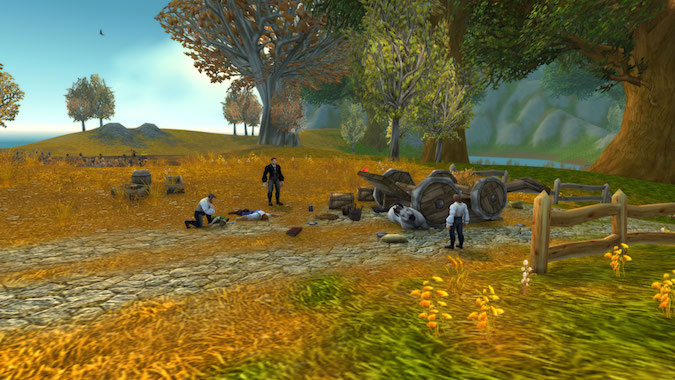 Time keeps passing, and I’m not really sure how. By which I mean: It’s Friday! Again!

Happy Queue, folks. Let’s get to the questions.

Is anyone else sick of not being able to have the player character be ordinary? We have got a super weapon for four expansions now. It started in MoP with the cloak then in WoD we got a ring. But it reached its most extreme in Legion with the artifact weapons. Now in BFA we have the heart of Azeroth.

I just want to be a ordinary adventurer.

That just doesn’t fit with the “ordinary adventurer” idea.

Of course, there is the idea of having an expansion where we sort of take a break. Where we look backwards instead of forwards, taking the time to repair and rebuild the many things we have wrecked over the years. It would be the sort of expansion that would pair nicely with fun cosmetic and social features like player housing, and I think it would be pretty fun.

But Warcraft is, at its heart, still a game about slaughtering the bad guys, and even if we did take an expansion off to fix up the world we’ve been protecting (and occasionally wrecking), we’d wind up in some brawls along the way — and that means we’d have to be armed for them.

Unfortunately, I think the whole premise of the game means we’ll never quite be ordinary.

I have a stupid question.

Ok, so let’s say Severe 3 or Expedient 3 is your best Corruption. Can you benefit from multiple ones? Or is the Rank 3 the maximum benefit you get from any of the corruptions?

The fact that corruption can stack is exactly what makes it so ridiculously powerful. Early in 8.3 you saw the world first guilds paying completely unimaginable amounts of gold for BOP corruption gear because it was such a big performance boost. Limit was picking up BOP corruption pieces and continuing to gear up right up to that last pull.

For the rest of us, accessing that level of power has mostly been about luck — and luck has been the limiting factor that’s (kind of) kept corruption in check. Because you needed lucky drops, you couldn’t gear up with every piece of the perfect corruption to become hyper powerful.

But I feel like corruption is about to really go out of control — as suggested by Blizzard’s recent nerfs to certain corruption effects. We’ve been in patch 8.3 long enough to get a lot of levels — and a lot of corruption resistance — on our cloaks. This lets us stack up more corruption buffs without risk, and corruption is becoming easier and easier to come by.

In addition to many, many drop opportunities, you can just buy it. There’s still some limiting factor of luck: you can’t buy every corruption every day, so when your best in slot isn’t available, you can’t gear up to an overwhelming level. However, as 8.3 continues on even that limitation will fade away.

It’s going to be interesting to see where this ends up. The end of expansion power curve seems like it will be huge.

Do you think Shadowlands will resolve the plot line from legion where the Deathlord decides to either spare or slaughter a significant portion of the Red Dragonflight just to raise a mount?

In BFA there is a quick follow up where the ‘genocide Deathlord’ gets lectured by a red dragon and called a hypocrite while fending off another Ebon Blade deathknight trying to raise a dragon mount of his own. The Deathlord then gets the choice of boasting about the genocide, insulting the dragon, or acting remorseful.

Considering those events and how the Ebon Blade and Bolvar are going to be very relevant throughout Shadowlands, how do you see this little side plot ending?

Because they had to do it to defeat the Burning Legion of course.

It went about as well for them in Legion as it did way back in Wrath: they got stomped.  And then, apparently, no one ever spoke of it again.

They must have been emboldened by the lack of consequences, because then they decided to go raise a Red Dragon as a mount.

There have been no real consequences and I don’t think there will be. That’s just the type of game WoW is: player choices don’t really exist (you couldn’t not do those things if you wanted to keep advancing) and we’re all on the same, single-track path through the story. Because all classes are in this together and only DKs experienced their dark class hall quest,, it’s going to be difficult to do anything about it, because it would take us out of that one-track story by giving different players different stories.

I think offering us real choices would be fascinating … but it would also mean creating a more branching storyline that allowed those choices to play out. And, again, that’s just not the kind of game WoW is.

The miraculous world saving champion of the Alliance walks up to Anduin and demands a kingdom or else they quit. What does Alliance territory does Anduin concede?

Westfall. It’s been a sad excuse of a place ever since the game launched, and who better than one of Azeroth’s greatest heroes to clean the place up for good? (Also if it’s our responsibility, then no one else has to deal with the place anymore.)

Of course, with our track record we’d probably find a way to make things even worse somehow. Our presence would draw in a demon invasion or something, leaving the zone even more desolate and miserable than before we were given care of it.

Easy, low-stakes Q4tQ. What is a good soundtrack for sleeping dogs? I submit the following.

You know, I don’t think I have anything better to offer. Let’s go with that.

And that’s all I’ve got for your Friday Queue. Take care, stay safe, and have a good weekend everybody.