The Queue: Just a frog and a pig hanging out with a banjo 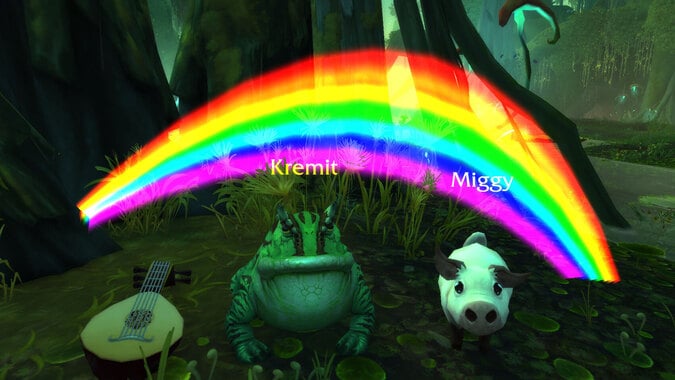 Has anyone found this frog and pig that are hanging out together in Nazmir? I wonder what’s up with them, and the totally random guitar. It could be something that we’ll just never be able to figure out. Sometimes Blizzard is just too good at these subtle references.

While we all put our heads together to puzzle this one out. I think that it’s time for — The Queue.

WHY ARE THERE SO MANY SONGS ABOUT ARTHONOS

Q4tQ: If Blizzard ever decides to add Ethereals, Attendants, or Brokers as an allied race, do you think they would break precedent and make them genderless? This popped into my head while looking at the new character customization options and how some are gender restricted, like how Tauren females can have flowers in their hair but not the males.

I think that would be a really good idea. As far as we’ve seen they’re just beings of pure energy anyways. There’d be no real sexual dimorphism like we see with the other possible races. Plus, if you did want to give players a choice between two different forms, you could just make option one an Ethereal and option two a Broker rather than a man/woman.

On the note of Tauren getting flowers in their hair, I really wish that both of them got the flower options. There’s no reason you can’t be a bull with an appreciation of flowers. I’m pretty sure there was a book and a movie about just that! I know it feels a little greedy since they’re putting all of this work into expanding the character creation stuff, and it’s great! Don’t get me wrong, I’m very impressed with it all so far. But it’s hard not to want just a little more y’know?

AND WHAT’S ON THE OTHER SIDE OF BENDOVER

I’m thinking of rolling a Hunter, and actually doing something with it. Pet Collecting seems like something I might enjoy, and it’s something fun to do, since the current End Game stuff is rather repetitive.

What are some of the “must-have” pets, or just rare skins for something, that I should look out for?

So I’ve never seriously played a Hunter, but I do have some favorite Hunter pets — like bears! I know, big shocker, right? Bears, wolves, and hyenas are my go-to when I’m imagining a Hunter. They’ve all got that “I live just on the edge of civilization” vibe that exemplifies Hunter in my mind. But the flip side is that it makes them all pretty common. Sure you could find a rare variant of a bear with an arrow sticking out of it or one of the Amani War Bears, but it’s not one that screams “must-have”.

So with the more mundane out of the way, I instantly knew exactly the pets for you. But you should try and tame them the ‘right’ way because that’s half the fun. Back in the Firelands patch for Cataclysm, they added a family of Lava Spiders that all had a trick to taming them. Like Deth’tilac could only be tamed after its health dropped below 20%, but it does an attack that one-shots the target and costs 10% of Deth’tilacs health. So you’d send your pet (or foolish friend who volunteered to help you out) in to get eaten by the spider until it was tameable. There are a few different ones, and I’m not 100% sure which you can even still do the challenging way, but it could be a fun afternoon of spider hunting.

ALEX CLERMS ARE VISIONS, BUT ONLY ILLUSIONS

Q4tQ:
Am I the only one who hopes the new “expended” version of the mobile app is like a gacha game but with your toons as character. So instead of having to grind on the phone they just get stronger as you level and gear them in the actual game?
I know so many people hated the mission table ever since it appeared in WoD but to me it’s one of the biggest thing I’m waiting to hear about for Shadowlands. The BFA version is futile and boring but I so so loved the Legion version on the phone.

There are so many things that they could do with a Warcraft mobile app. The hero collector idea is good, but if you needed a bunch of different characters to make it work then people who only played one would be a little sad. Likewise, if the rewards weren’t that interesting there would be very little incentive to run it even on your phone, but if they were too good then people who didn’t want to play a phone game would be annoyed that they had no choice. Obviously they would have a choice, but that’s the argument that they’d use. This is probably why we haven’t seen them do more with the mobile app beyond just mission table maintenance.

My number one requested tie-in app is someway of doing pet battles from my phone. You can make the rewards pet battle-related, so if you don’t care about pet battling in the main game, you wouldn’t care about them in the app. But it’s a concept that’s been proven to work on mobile already, just go full Pokemon with it. You only need two pets on-screen at a time, and a way to start random battles. But that’s been something that pet battlers have been asking for since pet battling was added to back in Cataclysm, so it doesn’t feel like it’ll be likely.

Hang tight though, I bet we’ll find out more about the mission table system for Shadowlands during the presentation on July 8th.

NEIL JUNG HAS NOTHING TO HIDE

QftQ: Are Timewalking dungeons tuned to character level or ilvl?

I know a few people answered already but it never hurts to answer again.

Or it should feel like that. When Blizzard put in the corruption system, they messed with the scaling a little to make sure that players weren’t absolutely trivializing content just because they had a Twilight Devastation or Infinite Stars. Turns out they were a little overzealous with their adjustment and wound up scaling things a little too far in the dungeons favor. Oops!

Thankfully, they fixed that earlier this month. So things are a little fairer for everyone, corrupted gear or not.

Ok, here’s a wierd question. On the new character creation screen, Horde and Alliance Pandaren now have seperate icons. Now If the Pandaren is a DK or goes through Exile’s Reach, I presume that they are factioned from the begining.

But if they go through The Wandering Isle, can they still select their faction at the end of the zone? 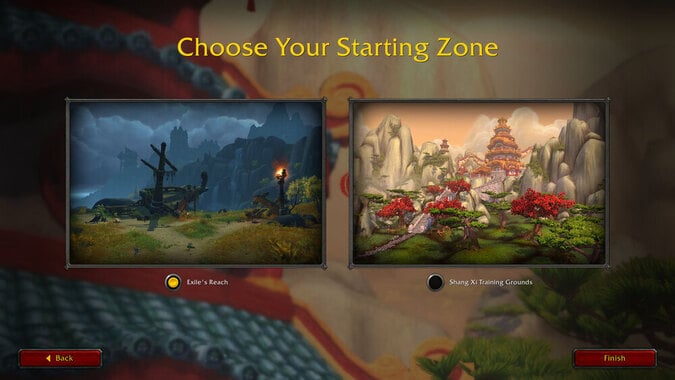 There are a few different interactions here. You can choose to make a new Pandaren and send them through the Wandering Isle starting area. I made a new Pandaren from the Alliance side of the character select screen, ran them all the way through the Wandering Isle story, and was still presented with the choice between Horde and Alliance at the end.

Choosing Alliance did crash the alpha for me, and when I loaded it up again it never left the loading screen, but on the third try it dumped me off in Stormwind ready to go say hi to King Anduin. I’m not saying that was a sign that choosing Horde is the better choice, but I’m not not saying that either.

You can also choose to send them through the Exile’s Reach scenario or make them a Death Knight. If you choose those they’ll just be whichever side of the screen you made them from.

If you were celebrating Pride month I hope you have had as excellent of one as you could! Current world situation notwithstanding. Have a great week everyone and don’t forget to leave some fun questions for Anna tomorrow!