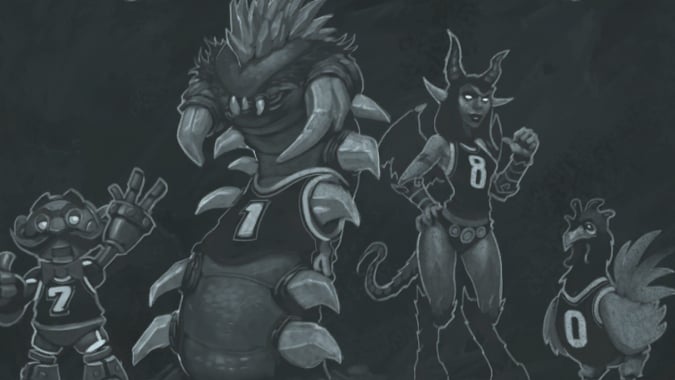 In this week’s Hearthstone Tavern Brawl, portals open and denizens from all over the Hearthstone universe step through to aid you in your battle. Look over your roster, and say “Decks, Assemble!”

Try saying it while holding a really cool hammer. I hear that helps.

This is a complicated Brawl.  The premise is simple enough: you start with a small deck and build it one card at time over the successive turns.  In practice, it is a little more complicated.

Your opening hand will have some combination of:  Chicken (1/1 Beast), Armor Plating (+1 health to a minion), Whiring Blades  (+1 attack to a minion), and/or Tarnished Coin (one mana). The player going second also gets The Coin.

Each turn, you’ll be presented with a Discover interface with three cards. The cards can be class cards or Neutral cards from any expansion. You’ll see Basic cards all the way up to Legendary cards. It’s all random.

If you transform a minion, the transformed state goes into your deck. For example, if you used a Witchy Lackey and it turned your Blazing Battlemage into an Acidic Swamp Ooze, the Ooze would go into your deck.

You don’t ever draw a card in this Brawl. Each turn, your hand is wiped out and a new hand is provided. The new hand is made up of any four cards from your deck. Once you have your new hand, play continues. The goal is the same as your normal kill or be killed Hearthstone game that we all know and love. 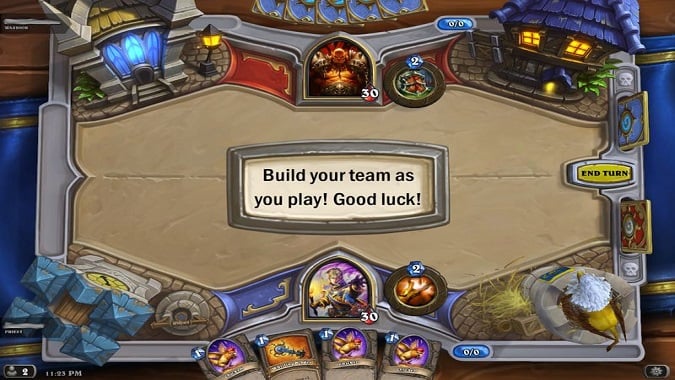 How to win the Decks Assemble Brawl

Not having a draw phase means cards with a “when drawn” effect like a Bomb from Clockwork Goblin will never go off.  Don’t pick it or a Wrenchcaliber. On the other hand, cards which have Discover affects are quite good. Tokens summoned from Deathrattle effects are exceptions and never appeared in my hand. Echo cards, like Hunting Mastiff, will create copies in your deck. If you play Hunting Mastiff and then two more from the Echo effect, all three go into your deck.

Almost any class can work. Mage’s ping is still powerful, but the prevalence of the 1 mana Chickens takes away much of Paladin’s usual advantage. Hunter and Druid have some natural Beast tribe synergy with the opening Chicken cards. Demon Hunter players can rejoice because Illidan is available as an option in this Brawl. This is a great opportunity to knock out some of those “Play as (class) quests” you might have.

Much of your strategy will depend on what you’re offered in the Discover phase. You need to strike a balance between staying alive and creating a good curve. This means having both low mana cards to contest the board right away, but also picking some powerful, high mana cost cards you can play on later turns. You don’t want to have 10 mana and only have four 1 mana cards in hand. You also don’t want to be staring at four cards that all cost 8 mana or more on turn four.

There’s no benefit to not playing a card. Whether you play it or not, its still in your deck and a valid choice for future hands. Play the cards you’re dealt and make each turn the best you can. Live in the now. There’s no planning ahead. You can’t save a card for next turn. It might not even be in your hand.

Patience and perseverance will lead you to victory

The Discover phase in each turn makes for a slow Brawl. The vast array of cards the game can offer you gives a wide range of outcomes. Have plenty of patience, stick with it, and eventually the RNG will fall your way and you’l have your new shiny Classic card pack.

This is a one-and-done Brawl for me. I’ll get my pack and hope for something I like better next week. There are other players who absolutely love this Brawl. Give it a chance and see what you think.