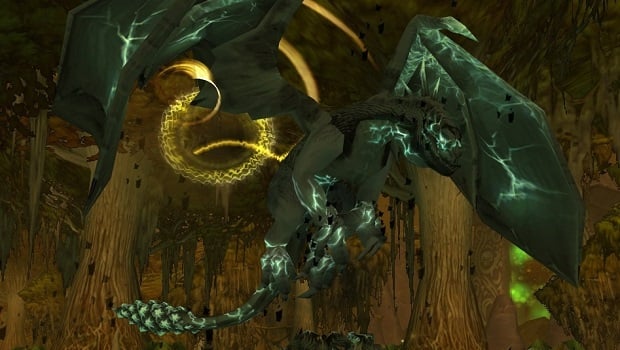 Once again, I am unsure how it came to be Friday, or how I’ve managed to wait so late in the day to write the Queue.

I suppose that means there’s no more time to waste: let’s get to the Queue.

Why did they take away being able to jump around while channeling soothing mist? How do I get used to this?

I think Monks are supposed to be cool and collected, focused on channeling mists into healing energy. I mean, that’s the idea. When I could move while channeling Soothing Mist I never stood still. I would run and hop all over the place.

That was probably the problem: having too much fun.

Well, that and also it let us do a fair amount of passive healing while being highly mobile. Now that we’re stuck to the ground, I don’t use Soothing Mist nearly as much because of that. Most fights require so much movement that it’s not worth spending a GCD on.

Q4tQ Has Ion’s comments today explicitly stating The Jailer is Shadowlands’ end boss made you rethink what’s going to happen in the xpac?

Our pattern over the past few expansions has been fighting the person we’ve spent the expansion thinking is the big bad — Gul’dan in Legion, Azshara in BFA — dies, and then we have another raid tier. So we’re going into Shadowlands thinking Sylvanas is the big bad, but — surprise! — there’s a bigger threat ahead.

The only surprising thing here is that Blizzard told us so far in advance what our end goal is. I haven’t decided yet whether this is is good for the narrative or not. Before we had a pretty good idea that there was a bigger bad than Sylvanas, we would have said “probably.” Now we know for a fact, and it’s just all of the stuff in between left to tell.

There’s going to be a lot in between, of course, but we know the overall shape of things now.

Regarding the removal of the exp bonus from heirloom gear.

Serious question: If you are someone that payed to have heirlooms upgraded with each expansion, and you’ve gotten use out of them, do you feel cheated out of that gold/currency cost to upgrade them?

I haven’t upgraded mine because I rarely use heirlooms but I feel like if I did, the bonus still applied to however many characters I would have leveled between upgrading them and the release of Shadowlands – is that wasted gold?

I don’t own every heirloom at max level, but I own quite a few at a mish-mash of levels, with a full set of plate and leather at 120. The plate set I finished quite recently, in late BFA, trying to rush my Paladin to 120 to join friends raiding.

This is where Mitch would chide me and say all I really needed was a set of cloth heirlooms, and he’d be right.

Well, he’d be right to an extent. You can’t transmog unless you’re wearing the appropriate armor type for your class, which is a major problem with the cloth heirlooms only strategy.

None of this was necessary, but it was convenient. I got to level with good, class-appropriate gear, which I never had to worry about upgrading. And I could transmog it! Except for the amount of gold I dumped on them, it was truly the best of all possible worlds.

I kind of wish I hadn’t dumped so much gold on heirlooms, but also I feel I’ve gotten my money’s worth. I’ve leveled a lot of alts and done some real zooming with these heirlooms, and it’s allowed me to be dang lazy about it. Laziness is a luxury that can be bought with gold.

So I’m thinking, come Shadowlands, I’mma just switch all of my crafters except my alchemist over to straight gathering professions. It seems that, over the last few expansions, outside of Alchemy, crafting professions just don’t offer anything that’s useful past the first patch without raiding. Thinking it might be more beneficial to just add some herbalists to feed mats to my alchemist.

In BFA, I actually took the opposite approach. I was a leatherworker/skinner, and now I am a leatherworker/alchemist. The decider here was the late-game BOPs… well, and Alchemy is straight-up one the best profession in the game.

With this combo I could craft BOP boots and pants with leveling, plus a high-quality, raid-level trinket. They took a lot of grinding to get the materials for, but none of them required me to go into a raid. On top of that, Alchemy doubled the duration of flasks, which is a real cash-saver for any competitive content.

In Shadowlands, Blizzard is trying very hard to make crafting relevant, and I think you’ll see this become even more true. I wouldn’t expect every cartable item to be a must-have, but every profession will have something you want or need… so it’s a matter of asking yourself how much you want it and how much grinding you’re willing to do for it.

Whats your character going to wear when they host their banquet?

WoW is really lacking when it comes to formalwear. To host a proper banquet, you want to exude an air of superiority and menace. Dresses in game rather lack both of these things, so I may just need to go with a full set of armor, polished to a perfect glossy shine, but still sending the message that I could kill any of you where you stand if I wanted.

Should Blizzard just let us use Artifact appearances for specs that don’t really make sense? Like, should Hunters be able to transmog their ranged weapons to the spear Talonclaw and just shoot people anyway? Or use The Silver Hand as a tanking transmog?

You should be able to use The Silver Hand for anything. Need to hit things? It’s literally a giant hammer! Need to heal things? You can frighten people into feeling better by brandishing it! Need to tank? As a giant hammer, it has significant surface area which could stand in for a shield.

Tldr: Yes. Yes they should. Let us choose our weapons and do whatever weird things we’d like with them. We earned them, so let us use them.

What are you most excited for out of the ‘announcements’ from the last few days? I really like the idea of using everyone’s professions to help craft Legendary items

Jalamenos asked practically the same question, so clearly you all want to know what’s the most exciting thing happening here really is. But frankly… I think it’s artifact transmog. It’s just going to be my paladin and a giant hammer forever, and that’s pretty great.

Take care, my friends. This week may be over, but another lurks just around the corner, ready to strike. So take the time you have and pet your dogs (and cats and lizards and anything else) and tell your friends you care about them. Because that’s the crux of what life is.

Have a good weekend, everyone.