The Queue: Oops, I was supposed to write the Queue 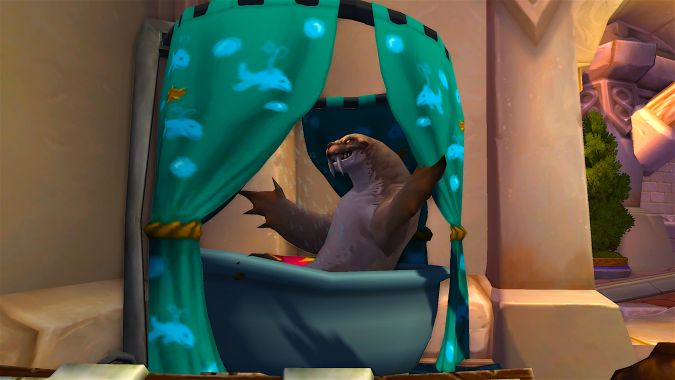 And now I have written the Queue! Hooray!

But I guess I should skip the self-congratulations and jump straight into the actual questions.

Q4tLiz: Based on coloration, are bassets made up of soft serve ice cream, caramel sauce, and chocolate syrup?

They’ve got a Neapolitan ice cream thing going on — a bit of everything good mixed together.

Q4tQ: What do you think the Shadowlands login screen will look like?
Will it have an annoying dragon?

It’s always an iconic or atmospheric scene that tries to capture the tone of the whole expansion in just a bit of art and music. To that end, I think it will be the broken sky over Icecrown, right where the expansion story begins.

Q4tLiz: would you want a WoW that in the vein of Star Trek, addressed real world issues using in universe allegories?

I’m of the opinion that stories are inherently political, and inherently address real world issues. Stories aren’t created in a vacuum. Whether intentional or not, every narrative is shaped by the knowledge, thoughts, dreams, and desires of the writers and artists who create it.

That leaves an indelible message in the work. There’s no erasing it.

World of Warcraft already offers some commentary on the world. Despite the much-discussed “war” in “Warcraft,” the game generally comes down on the side of peace and working together towards a common goal. Anti-war rhetoric is particularly strong in Mists of Pandaria, where Taran Zhu often speaks out against conflict. He has a particular quote that I think is quite relevant to real life:

It’s a nice thought, but Taran Zhu’s philosophy has not played out well in the game’s overall narrative. While the Alliance and Horde have often united against a common enemy, they always, inevitably return to fighting. Old grudges, well-worn habits, and those constant acts of aggression that keep the endless struggle going.

But even as Warcraft perpetuates its own war, it looks on war harshly — even Taran Zhu, who antagonized both major factions during Mists, was treated as a good guy, while the bad guys were the ones perpetrating the cycle of violence.

The Horde is frequently the aggressor in conflicts, but both Garrosh and Sylvanas are treated as war criminals by both factions. The entire conflict is scoffed at throughout Mists. And the moments where we come together — like Bane bringing Derek home to Jaina in BFA —  shine so brightly.

But you’re talking — I think — about more direct messages. But it’s a fine line to walk between subtle and heavy-handed, and the more explicit a story tries to make these messages, the more heavy-handed they’re likely to be.

There are plenty of parallels between Warcraft and the real world, because Warcraft was created by people who live in the real world. Talking about Azeroth’s problems is talking about our problems, just in a pretty roundabout way.

I don’t think Blizzard needs to create in-universe allegories: the space to tell stories like that is already there, whenever they want to take it.

We still don’t know what the Diablo 4 classes will be besides Druids, Barbarians and Sorcerers. What’s your dream class? Would it be an established Diablo class, a new class, a WoW class that would make no sense but you don’t care, or something else?

Amazon, all the way. I am a big fan of its unusual melee/ranged playstyle, which featured skills that let you get up close and personal (jabbing enemies with your spear) as well as keep a safe distance (shooting arrows or throwing your spear, if you preferred). Perhaps it’s a bit like a Survival Hunter, adept at tussling in a melee brawl but also deadly at a distance.

Everyone knows that Jellycat is one of the cutest of the new pets being added in Shadowlands, what other pets would you jelly-ify for maximum cuteness?

There’s a Jellycat, so where’s the Jellydog? Or more specifically, the Jelly Corgi?

Come on, you know you want it.

Why can’t we sleep?

If I knew that, I would be sleeping instead of writing the Queue right now.

And that’s all for now, my friends. Another weekend is upon us, so take the days off — if you have them — as a chance to relax from the chaos of another busy week. Don’t forget to pet your pets and tell your loved ones that you love them. Life can be rough, and sometimes we need the reminder.

Ttfn, everybody — I’m going to go take a nap now.