The Queue: Take a break 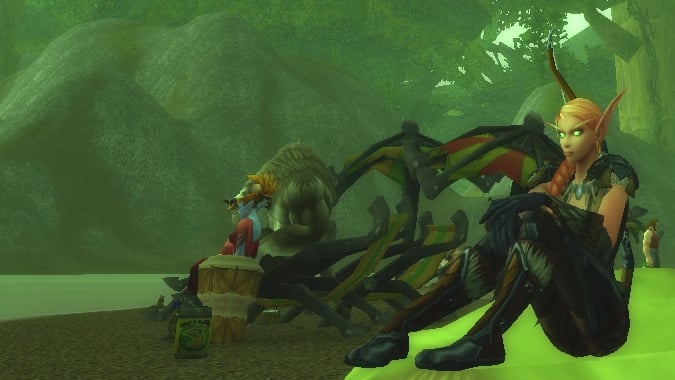 We’re at the point of quarantine where I’m so desperate for a vacation that I’ve been asking — maybe even begging — my kids to go spend the night with me in a tent outside. They are not at all into it.  I don’t fully blame them, since where we live it is uncomfortably hot and sticky, and it’s been raining for the past two days, but still. Since our summer vacation usually involves a road trip with fast food and gas station snacks I’ve also been craving Burger King. I finally broke down and got some gummi bears, but it just isn’t the same.

This is The Queue, where you ask questions and it’s my job to answer them, even though I really need a vacation. No offense.

Q4BW and/or Queue – I leveled up through Beta and did two chapters of the Covenant Campaign so far and I’m up to 7 different types of currencies. At what point do we deal with currency overload? I realize this is probably because they’re putting all the systems into the 9.0 patch as opposed to introducing them in a 9.1, 9.2, 9.3 etc patch. but it just seems a bit much. What do you folks think?

I feel like you hit the nail on the head here — a lot of the currency overwhelm could be avoided by limiting them to a patch or introducing them later the same way as geegaws from Nazjatar or gizmos from Mechagon or whatsits from N’Zoth’s minions don’t feel super overwhelming. All the extra junk from Mechagon is still an albatross in my bags, though.

The past couple expansions have had a ballooning number of currencies for a huge variety of things. In a lot of ways new currency is a way around gold inflation — if they make Benthic pieces 50,000 gold, say, you could’ve just done the intro quests and been all-but finished with the tier. With the economy, we’re at a point where that amount of gold is laughable for some but would put them completely out of reach for others.

From a design perspective, the reasons why I’d like for them to do a currency “squish” for old content is probably exactly why they never would. Thematically, Garrison Resources and War Resources are darn near identical and it would be great, when BfA is in the rear view mirror, to just use smash ’em together. But the reason it’s appealing — ugh, Draenor, but ooh cool Draenor stuff — is why they don’t want me traipsing around doing World Quests in Tiragarde in order to send out my followers for furs from Draenor.

Mechahunter is in Coldarra now, and I’m joyfully skinning drakes.

And then started thinking, hold on, we can’t skin firbolgs or worgen, but why can we skin drakes?

…and then realizing why, in Shadowrun, there’s a storyline where dragons start retaliating, forcefully, against people selling dragon parts.

You’re focusing on the sentience of these beings as the reason why they’re not skinnable, but I’d guess that there’s far more usable — and invaluably tough — hide on a dragon than a Worgen. I’d also guess that both Worgen and firbolgs don’t take the best care of themselves and their fur while dragons are generally somewhat meticulous about just about everything. If an animal has patchy, fleabitten fur while they were alive, they’re not making a good pelt after they die.

Yes, this is a Worgen subtweet.

I’m not sure how this would work, or if it would, but it might be a way to satisfy those who want to keep the faction war going and those who aren’t as keen. There could be two different paths to take , one would the typical types of quests, etc, while the other could be more of a supporting role. Maybe being a medic, or gathering resources to aid those fighting, without taking part in it. Those who chose this route would be immune from attacks from NPC’s of the other faction.

It would probably be too difficult to do, but the more I think about it, the more I like the idea.

Oddly enough, BfA is the first expansion in a while where faction choice truly mattered, in terms of your experience of the expansion — perhaps the first time since Vanilla. In most other expansions, though there were a few hubs where things differed, you still usually went through and killed the same mobs in the same zones for thematically similar quests on both sides so if you wanted to headcanon neutrality it was a relatively simple feat. In BfA, you couldn’t even do that when the experiences on each side were so wildly different. Sure, you were directed to invade Drustvar as a Horde player, but though the overall zone’s ambiance was still creepy and organ-y, you were usually accompanied by Goblins and the overall experience was radically different.

If you’re a diehard loyalist instead of bifactional, I’d recommend checking out the other side’s questing experience while we’re in the waning months of BfA. Playing Alliance first made me feel like the expansion was a rollicking high seas adventure, but playing Horde was all about a rough and tumble safari. Neither is wrong or bad, they’re just very different.

I will say that after playing through as Alliance first and then Horde, every time an Alliance player complained about missing the jump onto the boat with the mission table I was ready to flip that table. Everyone should experience Dazar’alor for a little while without flying, because it was truly maddening enough to get me to want to start a whole new faction war.

Q4tQ: so Anduin is taken into the spirit world, with Taelia; a potential love interest going there to save him. Is Shadowlands just WoW copying Bleach’s homework?

But really, going into peril to save the damsel in distress is an incredibly common character motivation and plot arc. It’s a slight twist here because Anduin is a dude, but it retains the overall character archetype in that he doesn’t generally fight with his brawn, but Taelia is swinging a big hammer. Honestly, given what we know of the Light I’d guess Anduin is better equipped to wreck face in The Maw than almost anyone and doesn’t really need saving per se, but that’s assuming he can even call the Light in there — and of course Sylvanas seems to be gunning for him personally.

Question for the Que: I have not had an active subscription since early Legion but my wife played into early BfA. I currently plan on returning for Shadowlands and also creating an account for our daughter. (Who by the way was a newborn when we played back in Wrath. Wife main tanked in ICC with her wrapped to her chest!) I’m wanting to let my wife’s account use the Recruit A Friend program to add both of us to the game so she gets all the perks from having us subbed. Does Blizzard normally change the RAF right before an expac launches or are we probably safe waiting until launch (or soon afterward)? Thanks for your assistance!

Blizzard put out a series of big changes to how RAF works relatively recently, so I would assume it’s going to remain the same. Heck, I left WoW initially during Cataclysm because I had a newborn, and when I came back for MoP my husband got the spectral gryphon, and then he quit not long after that. After that they turned off RAF, and when he came back in freaking Legion he was ineligible for RAF because his quit date was too recent.

I will say we haven’t had a turnover since they revamped the whole RAF system, so they may change it out to a different mount or cloak appearance in the future, but they haven’t announced this change at all, so you’re probably safe given the long lead time of RAF.

Results of Anna Earworm™: Going off Spencer Morgan’s question, I started thinking to myself, “wasn’t there an orchestral version of Orpheus that had an awesome oboe and clarinet solo in it?” And there is, by Offenbach! It’s the piece the “can can” song is from, essentially. But then I started thinking about oboe solos and after a couple other tracks, as I finish The Queue, I’m listening to the Bacchanale of Samson and Delilah by Saint-Saëns. It’s kind of a banger tho. Better luck next time Cory! See y’all next week.